The chance to showcase hybrid engine technology and gain technology transfer between its INDYCAR program and the consumer market has made Honda a solid advocate of INDYCAR’s decision to introduce hybrid engines in 2022.

INDYCAR officials made the announcement on August 1 and the new engine platform will help deliver more than 900 horsepower to the IndyCars. The innovation is focused on “electrified response” in service to IndyCar drivers and fans while maintaining the key components of an internal combustion engine (ICE).

From a manufacturer’s standing, the decision “parallels addition of hybrid systems across Honda product lineup.”

Honda officials spoke about the announcement by INDYCAR on August 1 that it will introduce hybrid powertrains to race cars in the NTT IndyCar Series for the 2022 season. The plan to begin using hybrid powertrains in a pinnacle racing series like INDYCAR parallels a recent announcement from Honda that it would expand application of hybrid electric systems throughout the Honda product lineup in the coming years.

“Racing has long been a crucible for the development of new technologies and people at Honda and this direction will enable us to promote a technology through racing that is essential to the future of our automobile business,” said Ted Klaus, president of Honda Performance Development. “At the same time, the immediate response delivered by an electrified powertrain will improve vehicle performance for our IndyCar drivers and the quality of the competitive show for our great fans.”

According to the INDYCAR announcement, the hybrid powertrain will work in parallel with the internal combustion engines from Honda and Chevrolet, combining growing hybrid technology with the traditional power plants to produce in excess of 900 horsepower for the most competitive racing series in the world.

“The addition of hybrid power to INDYCAR parallels our own decision to reduce CO2emissions by adding hybrid electric systems across our entire Honda model lineup,” Klaus continued. “For our customers, it’s about making environmentally responsible vehicles that people enjoy driving, and in a similar way, adding hybrid power to our INDYCAR formula will make the racing even more enjoyable for our fans.”

From a manufacturer’s standpoint, Honda is targeting to make two-thirds of its global automobile sales electrified by the year 2030, as it works to realize its dream of a carbon-free society. Earlier this year, Honda announced plans to expand the application of its award-winning two-motor hybrid system to the entire Honda product lineup, in order to achieve challenging goals to make products more appealing while lowering CO2emissions.

Honda’s INDYCAR program is an opportunity to promote this direction, according to the manufacturer.

Honda also has been racing hybrid powertrains over the past five seasons in the Formula 1 series. While the hybrid power unit in Formula 1 is proprietary to Honda, the INDYCAR power unit, although single-sourced, will enable Honda to develop next-generation people and processes to integrate Electric Motor Torque along with Engine Torque. Honda racing’s experience and recent successes in Formula 1® bode well for Honda integrating hybrids in their INDYCAR strategies and efforts. 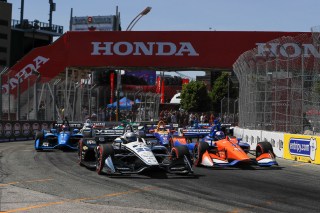 NDYCAR’s single-source hybrid platform includes a multi-phase motor, inverter and electric storage device that will create energy recovery from the car’s braking system. This will mark the first time that IndyCar race vehicles will depart from the traditional, manual hand-held electric starters to a hybrid component that can be activated by the driver from the cockpit.

In addition to allowing drivers to restart their cars from the cockpit, the system will increase the horsepower of the push-to-pass system and potentially improve the pace and overall time of races.

The hybrid powertrain will be integrated into the push-to-pass system and provide a power boost to the tool used by drivers for overtaking on road and street courses. The current system, which is limited to 200 seconds per driver in those events, will gain additional horsepower from the hybrid system to help INDYCAR reach its target goal of achieving 900-plus horsepower for its cars.

The new technology will also have some valuable benefits from a safety standpoint.

The system will improve on-track situations by giving the driver the ability to restart the car quickly should it stall on track. This will help reduce the time the driver and AMR Safety Team are exposed on track as opposed to awaiting a manual restart.

Also, this feature could potentially help reduce the number of caution flags for stalled cars on track and leading to improved overall pace and time of races.

The new INDYCAR powertrain strategy now will align with the arrival of the next-generation chassis as initially scheduled. INDYCAR also announced that the new engine regulations will be in place for six years – 2022 through the 2027 seasons – in a concerted effort to provide a clear vision and stability for the NTT IndyCar Series engine manufacturers and teams.

Originally, a 2.4-liter engine platform was going to begin in 2021. By moving into hybrid technology, the new engine will be introduced one year later.