It’s been nearly a full century since a driver from France won the biggest race in the world. When Simon Pagenaud won the 103rdIndianapolis 500 on May 26, he became the first driver from France to win the fabled event since Gaston Chevrolet in 1920.

Pagenaud’s win was cause for celebration, and on Monday, the Indy 500 victory party made it to Paris.

He became the first driver to have his image unveiled on the famed Borg-Warner Trophy outside of the United States. Pagenaud’s sterling silver likeness, about the size of an egg and sculpted by William Behrends, was unveiled for the first time at a ceremony on the rooftop terrace of Le Meridien Hotel with the famed Eiffel Tower in the background.

Paris is called the “City of Light,” and that was a perfect place to showcase the impressive beauty of the Borg-Warner Trophy.

“It shines,” Pagenaud told NBCSports.com in a telephone interview Monday. “It’s on a rooftop in Paris, and it shines. People were mesmerized.

“To see my face on the trophy, it’s phenomenal. I’m looking at the trophy right now, and it’s next to the Eiffel Tower.

Pagenaud has earned a new nickname in France since Indy.

“They call me ‘Pagenaud Superhero’ in the headlines, and that’s pretty special to see that,” Pagenaud said. “I don’t want to sound pretentious, because that is not who I am, but it’s special to read things like that and be recognized in your home country. It’s very emotional.

“Again, I’m very grateful. It means a lot to be the first driver outside of the United States to have this unveiled in another country. I don’t want to take anything away from the U.S. It’s my country. I live there, and I love the U.S. I would not have the career I’ve had without the U.S. 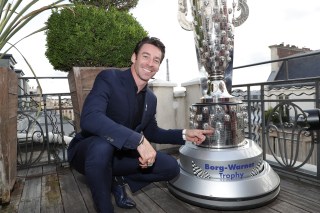 “Getting the recognition in France is phenomenal for me. It allows me to reflect in what I have accomplished by traveling the world with this win. I want to emphasize how grateful I am to BorgWarner for allowing me to realize a dream as a kid, which was to bring the trophy here to France. It comes from the heart. I feel grateful and thankful that I can bring awareness of our sport, which I believe is the best series in racing.”

The next stop for Pagenaud will be a trip to his hometown. The 35-year-old will travel Thursday to his home state of Vienne and unveil the trophy with a reception involving people who have helped him throughout his career. From there, it’s off to his hometown of Montmorillon.

BorgWarner made 1,000 T-shirts for townspeople attending the event.

“Going back to my hometown with the Borg-Warner Trophy, that’s going to be a very special moment,” Pagenaud said. “I’m so proud of where I’m at, at the moment, so proud of representing the Indianapolis 500, BorgWarner and France.

“The Leigh Diffey of France, Julien Febreau, the commentator on the Formula One races, will come to my hometown to present a great show we put together highlighting the Indy 500. Tonight in Paris was already emotional. I managed to manage.

“The words in French were difficult for me to come out because I had more emotion, and it’s a language, I speak less than English now. My natural go-to language for racing is English.

“I’m sure my French will fully come back by the end of the media tour.”

The Team Penske driver’s trip home also included a stop at the Hungarian Grand Prix in Hungaroring on Sunday. He began Monday’s activities in France at 4 a.m. He was still conducting interviews at 10 p.m.

His trip to the Formula One event in Hungary was arranged by Renault F1.

“I was received like an absolute king there,” Pagenaud said. “It was really great. The food was fantastic, and the car was phenomenal to see up close. I’m also friends with some of the Honda F1 people from when I worked at Red Bull. I got to see Pierre Gasly and Daniel Ricciardo, who I spent quite a bit of time with. We talked about Will Power, which was funny.”

He also got to chat with F1 drivers Nico Hulkenberg, Charles Leclerc and Sebastian Vettel.

“Vettel really liked my ring,” Pagenaud said, referring to his Indy 500 winner’s ring. “I told him to come over and get one. We’ll see if takes the advice.

“Overall, it was overwhelming to see the reaction and impact the Indy 500 has, even in the Formula One world. It is definitely the biggest race in the world, and I could tell.”

Typically, the winning driver of the Indianapolis 500 has his face on the Borg-Warner Trophy unveiled after the season, usually in December at the Indianapolis Motor Speedway Museum before the start of the Performance Racing Industry (PRI) Show.

This year, sculptor William Behrends’ process of making the face that is ultimately a sterling silver image attached to the trophy was sped up so the French-born driver could unveil it in front of his adoring fans in France.

He is the fifth driver from France to win the Indianapolis 500.

“Personally, it’s a huge honor to present it in France,” Pagenaud said. “I’m glad and excited to bring some awareness to the biggest race in the world in France.

“It was very emotional to me. For some reason, speaking in my native language brings a lot more emotion.”

Pagenaud said those who saw the Borg-Warner Trophy for the first time were shocked by its size, how realistic the face looks and its value.

The man behind taking the Borg-Warner Trophy on the road for Monday’s unveiling is Fred Lissalde, President and CEO, BorgWarner, Inc. Lissalde is also from France.

This won’t be the end of the celebration for Pagenaud, however. At a later date, he will get the “Baby Borg” Trophy, a smaller version of the Borg-Warner Trophy that Pagenaud will get to keep.

Before that, however, Pagenaud still has a championship to try to win. He is currently third in the NTT IndyCar Series standings with four races remaining, beginning with the Aug. 18 ABC Supply 500 at Pocono Raceway.

“Just before I left the United States, I made sure my race engineer, Ben Bretzman, and I were on the same page,” Pagenaud said. “We prepared the setup for Pocono, so we already know where we are going. I took time to study tapes of Pocono. As soon as we are done on Thursday, I will focus on Pocono, and that gives me a whole week to think about it and get ready.

“I’ve been training to make sure I stay in shape. This is the strongest I’ve ever been.

“All of this continues to give me energy and such a positive attitude. It gives me confidence that I’ve always needed, and as you can see lately, I’ve risen to the top.

“I have no question that when we do go to Pocono, we’ll be fighting for it.”