A two-car McLaren team is joining the NTT IndyCar Series in 2020, poised to dramatically change the landscape of the series.

It returns one of the world’s most iconic racing brands into North America’s pinnacle of open-wheel racing on a full-time basis for the first time since 1979, and will alter the makeup of manufacturers and drivers.

Arrow SPM team principal Sam Schmidt told NBCSports.com at Mid-Ohio two weeks ago that he had been talking to McLaren officials about this arrangement and would have to switch from Honda to Chevrolet to make it a reality.

Arrow SPM had one more year remaining on its contract with Honda Performance Development, but that deal will conclude at the end of this season. HPD put out a statement shortly after Friday morning’s announcement:

“HPD is proud of its numerous accomplishments in partnership with Arrow Schmidt Peterson Motorsports, which include all seven of the team’s NTT IndyCar Series victories to date, as well as two coveted pole positions for the Indianapolis 500. Although we regret that this partnership will be coming to an end in advance of the 2020 season, HPD has the utmost confidence in the strength and commitment of its remaining partner teams, all of whom have won at least one NTT IndyCar Series race in each of the past two seasons. We look forward to demonstrating that same type of depth across our entire lineup for many years to come.”

Arrow Electronics, which also supports McLaren’s Formula One team, will continue as title sponsor for the new partnership.

“Chevrolet and McLaren have a storied history of racing together, going back to the mid-1960s,” said Jim Campbell, US Vice President, Performance and Motorsports, Chevrolet. “We have always had tremendous respect for Zak Brown and Gil de Ferran, as well as for Sam Schmidt, Ric Peterson and Mike Long. We are looking forward to partnering with the entire Arrow McLaren Racing SP team as we prepare for the 2020 IndyCar season.”

Ironically, these two teams are the last two big-name operations that have failed to miss the Indianapolis 500 over the past two years.

SPM’s James Hinchcliffe came up short in 2018, and two-time Formula One World Champion Fernando Alonso couldn’t get the McLaren entry into this year’s race. After the latter embarrassment, McLaren Racing CEO Zak Brown vowed that McLaren would be back. 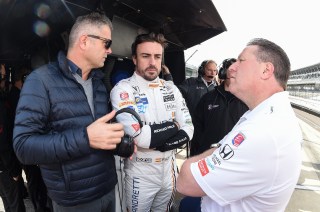 “IndyCar has been part of McLaren since our early years of racing, and the series today provides not only a commercial platform to continue to grow our brand in North America, but competition with some of the best teams in international motorsport,” Brown said. “This team provides McLaren with the right synergy as a strategic partner for our return to the sport. We believe together we can help each other achieve our mutual ambitions. Sam Schmidt and Ric Peterson have built a solid foundation and we look forward to working together to take the team to the next level.

“….We come to IndyCar in full respect of the sport, our competitors, the fans and the task ahead. At our core, we at McLaren are racers and where there’s competition that puts us to the test, we will race. The NTT IndyCar Series provides such a challenge.”

Under the new partnership, the infrastructure of Arrow SPM will continue with McLaren adding technical expertise, commercial experience and marketing strength.

Schmidt and Peterson will continue in their current roles, while McLaren sporting director Gil de Ferran will lead his company’s IndyCar program. That will operate from McLaren headquarters in Woking, England but remain independent from its Formula 1 effort.

“IndyCar is a natural fit for McLaren, given our legacy and determination to succeed at the top levels of international motorsport,” De Ferran said. “Our ambition, over time, is to consistently compete for wins and championships. We acknowledge the challenge ahead of us, but McLaren is committed to this partnership and to supporting the team as a whole.”

As for the potential driver lineup, fan favorite James Hinchcliffe – who married his longtime fiancée Becky Dalton last Saturday in Ontario – has a contract with the team through 2020.

The team intends to honor that, and Hinchcliffe has stated that a discussion will have to be had about his current partnership with Honda, which has increased his profile in North America in several ways – including making him a TV pitchman for their annual spring sales.

Swedish rookie Marcus Ericsson has a one-year deal with the team that concludes at the end of this season.

There is also Alonso. In the past, he has said he is not interested in a running a full-time IndyCar Series team, but if he changes his mind, that would be something for the new operation to consider. He has a contractual relationship with McLaren, and if the Spaniard wants to make another attempt at the Indy 500, McLaren would be open to a third car for that race.

One driver that is highly sought after in the paddock is 19-year-old Colton Herta from Harding Steinbrenner Racing. His contract is held by two different teams, including HSR and Andretti Autosport.

McLaren is of the understanding that Herta will not be available for next season, as Michael Andretti continues to solidify the partnership team at HSR.

The arrival of McLaren, however, will not expand the field by two more cars, as both of the current Arrow SPM entries are now part of the new team.

“I’m extremely proud of the team that Ric and I have built and that a legendary brand like McLaren Racing has decided to partner with us to form Arrow McLaren Racing SP to continue our march to the top of IndyCar,” Schmidt said. “Arrow is a tremendous partner which has been integral to our growth as a team since 2015 and to the creation of this new partnership. The combined technical resources and commercial opportunities both McLaren and Arrow bring to the table provide a winning combination.”