INDYCAR CEO Mark Miles told NBC Sports.com he has known about the McLaren deal with Arrow Schmidt Peterson Motorsports for several weeks and is “delighted” it is now official.

McLaren announced on Friday it would join forces with the current NTT IndyCar Series team to create Arrow McLaren Racing SP as a Chevrolet-powered team in 2020.

“We’re delighted,” Miles told NBC Sports.com from France, where he was spending last week with Indy 500 winning driver Simon Pagenaud on a victory tour. “It’s great. It’s important. I have thought for some time this day would come. It was more of a matter of ‘when,’ then ‘ever.’

“It’s just great to have this done, but it doesn’t come as a surprise. It’s something Zak Brown (McLaren CEO) has been working on for a very long time, including this relationship. He and I were talking about this back in May, at least. It has been a long time coming, but that has been quite deliberate. I think they are committed to this strategy.”

Arrow Schmidt Peterson Motorsports had one more year left on its contract with Honda, but it is breaking that agreement in order to strike a deal with McLaren.

That was one of the many twists and turns it took for McLaren, before getting to this point.

“I’ve known they were working on this approach for several months,” Miles admitted. “It’s not something they came to in the last week or so. My reaction is if it is good for Schmidt and Peterson and McLaren and it’s a strong foothold for McLaren to start in the series, then it is a good result.

“McLaren is a great brand in the automotive industry with a great following. They are rich in racing history. Zak Brown, who is leading the charge at the moment, appreciates IndyCar and the Indianapolis Motor Speedway.

“He is a great promoter in whatever he is involved with. I think it will help bring attention and another level of competitiveness with the Schmidt team. I can’t wait to see them out on the track.”

McLaren was once part of IndyCar’s legacy in the 1970s, when founder Bruce McLaren of New Zealand brought a team to the Indianapolis 500 beginning in 1970. McLaren was killed in a Can Am crash at Goodwood Circuit, Goodwood, England on June 2, 1970, but the automotive company remained deeply rooted in racing, including Formula One.

Mark Donohue gave McLaren its first victory in the 1972 Indianapolis 500 when Penske Racing used the McLaren chassis for the first of the Team Penske’s record 18 Indy 500 wins.

The McLaren team won the Indy 500 for the first time with Johnny Rutherford in 1974 and again in 1976. McLaren left IndyCar racing after the 1978 season before returning to the Indianapolis 500 with two-time Formula One World Champion Fernando Alonso of Spain in 2017. That team was in partnership with Andretti Autosport because both the McLaren F1 and Andretti Autosport teams were powered by Honda.

After an acrimonious split with Honda in Formula One at the end of the 2017 season, Honda officials in Japan would not allow American Honda and Honda Performance Development to be partners with a McLaren IndyCar effort. 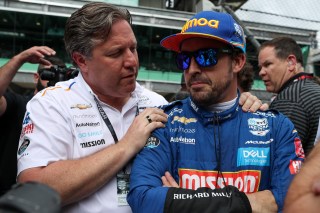 McLaren returned to the Indy 500 this past May as a Chevrolet-powered team with an engineering alliance with Carlin Racing, but the McLaren effort was so disorganized not even Alonso could get the car into the 33-car starting lineup.

Team owner Michael Andretti told NBC Sports.com that he seriously considered switching to Chevrolet in order to join forces with Honda, but ultimately changed his mind and signed a contract extension to remain with Honda. That was a key decision in helping him re-sign NTT IndyCar Series star driver Alexander Rossi.

Brown and McLaren found its partner in Arrow Schmidt Peterson Motorsports, although leaving Honda with one year left on an existing contract has created some controversy.

Honda now has two less cars in the lineup and Chevrolet gains two cars, creating a closer balance in car count in the series.

“I think there is great balance with Chevrolet and Honda in every way between teams and the drivers they each have and great strength,” Miles said. “The McLaren guys compete in Formula One, so they are used to big budgets and doing everything right and I think that is good for the series.”

Does this create the fourth major team in the NTT IndyCar Series?

“I think so,” Miles said. “Everybody can score the teams the way they want. I’ve thought Arrow Schmidt Peterson were in the top four all along. This adds strength to them. This makes it more apparent. It’s just terrific.

“It’s such a well-known brand. It’s a prestigious brand. They do everything in a first-class way. I’m in France now and have been here close to a week with Simon Pagenaud promoting his victory in the Indianapolis 500 in IndyCar. That was big news, and this is big news for our series.”