For most of Sam Schmidt’s career as an NTT IndyCar Series team owner, he has been loyal to Honda. But all of that loyalty was put aside when McLaren CEO Zak Brown convinced him to a lucrative arrangement where McLaren will join forces with Arrow Schmidt Peterson to create Arrow McLaren Racing SP beginning in 2020.

In order to make that happen, Schmidt had to break a contract with Honda Performance Development (HPD) that had one more year left. Next year, Arrow McLaren Racing SP will be powered by Chevrolet.

“It was an extremely difficult (decision) because there is that loyalty,” Schmidt responded to a question from NBC Sports.com on a national teleconference Monday afternoon. “There is that length of time and a lot of success, and at the end of the day, they (Honda) are a great motorsports and OEM operator.

“When they aren’t winning, they do everything possible to win, so we wanted to stay in that camp.”

Business is business, however, and the opportunity to align his team with the powerful McLaren group from England outweighed Schmidt’s loyalty to Honda. That is why he broke the contract, much to Honda’s dismay.

“When you draw the line down the center of the paper and you put your pros and cons on each side, that was definitely a big negative to doing this deal,” Schmidt said. “On the other side of the page, there was so many positives that it really was, a no-brainer.

“At the end of the day, it’s just unfortunate, but it’s ultimately their decision.”

Because of an acrimonious split with Honda following the 2017 Formula One World Championship season, Honda Japan will not allow American Honda to conduct any future business with McLaren.

There are four races left in the 2019 NTT IndyCar Series schedule for Schmidt and the two-driver team that includes James Hinchcliffe of Canada and Marcus Ericsson of Sweden. Next year, Hinchcliffe’s contract with the team will be honored, but the team is actively seeking candidates for the second ride.

The team also confirmed it would field a third entry for the 104thIndianapolis 500 on May 24, 2020. That could potentially be two-time Formula One World Champion Fernando Alonso of Spain, should he decide to return to the Indy 500.

“The phone has definitely been very active since we have announced with all sorts of individuals, but I’ll let Sam comment further on the driver situation,” McLaren CEO Zak Brown said in response to a question from NBC Sports.com.

Schmidt admitted it’s a key decision to make sure this arrangement is successful. 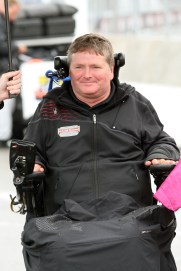 “It’s a big decision, so, between ourselves and Arrow and McLaren, there’s a lot of great minds there with years of experience,” Schmidt said. “The first goal was to get past the announcement last week, and then as Zak said, see how the phones light up and then make that list, and then reconvene later this week and start making some of those decisions and offers and whatnot.

“Stay tuned, but it will be a few weeks before we make any announcements.”

McLaren already owned new equipment and two Indy cars to run a team in the NTT IndyCar Series. That equipment will now move into the current Arrow Schmidt Peterson Motorsports shop on the northwest side of Indianapolis.

McLaren, Arrow, Schmidt and Ric Peterson of Calgary, Alberta will be the principals of the operation with two-time CART champion and 2003 Indianapolis 500 winning driver Gil De Ferran in charge of running the operation. He is currently McLaren’s Sporting Director.

“I’m super excited that McLaren has placed Gil de Ferran in sort of the head connect for us there, because with his championships in Indy car and Indy 500 victory, his long-term association with Roger Penske, his ownership of his own team that was successful, really excited to work with him as a major conduit in the McLaren situation,” Schmidt said. “But then it’s just kind of we want to make sure we manage the opportunity. That’s probably our biggest challenge is the fact that we see a lot of opportunities, both on the technical side of the business and on the commercial side of the business, and I think we need to manage those opportunities carefully to not be overwhelmed. Just setting up the structure to do that and moving forward, very exciting for all of our partners.”

“That was to meet some of the people that will be working alongside them and to start identifying and understanding what some of McLaren’s capabilities are,” Brown said. “Now you will see Gil and some other McLaren people at the remaining INDYCAR races and in Indianapolis.

“We have started the education process from SPM and looking into McLaren, and now we’ll have McLaren look into SPM, and then over those next few months, start to identify areas in which we think we can further support and amplify what SPM has sitting within their capabilities as of today.”