Beyond that, however, the future of this event remains uncertain.

This is the final year of a three-year contract between INDYCAR and the quirky 2.5-mile, triangle-shaped speedway located in Northeastern Pennsylvania. The track has a deep heritage and history in big-time IndyCar Series racing dating all the way back to its first race in 1971.

Dr. Joseph Mattioli’s dream was to turn a large spinach farm into a racing palace in Pennsylvania.

It was a mainstay on the IndyCar schedule during the United States Auto Club (USAC) days, but had an uneasy alliance once CART took over the sport in the 1980s. CART teams complained about the bumpiness of the track, the boiler-plate walls in the turns and just about anything else they could think of before they left following the 1989 race.

Dr. Mattioli vowed that IndyCar racing would never return to Pocono during his lifetime and he was right. Mattioli died in 2012.

But a new generation of the family wanted to bring IndyCar back to Pocono. Dr. Mattioli’s grandchildren, led by Nick and Brandon Igdalsky, were successful in convincing Mattioli’s widow and family matriarch Rose, into bringing IndyCar back in 2013.

But the crowds that used to jam the facility back in the day were slow to return. Several times since then, INDYCAR and Pocono have come close to dropping the race over poor attendance but were most recently salvaged by a sponsorship contract from ABC Supply.

That sponsorship, along with INDYCAR’s contract, concludes with Sunday’s race. INDYCAR officials have been in negotiations with Richmond International Raceway about a date on the 2020 schedule that would either replace Pocono’s slot, or become an 18thevent if Pocono and INDYCAR are able to come to an agreement. 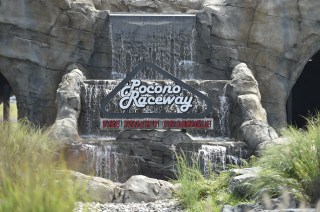 “I don’t think we are ready to announce any decisions yet,” INDYCAR CEO Mark Miles told NBC Sports.com. “We have believed for some time they would get to a place where they would only have one NASCAR (Monster Energy) Cup weekend. We have talked to them how that might change their prospects and grow the IndyCar weekend in the future.

“We have understood the probability they won’t have a second Cup weekend. We have asked them to help us understand how that creates a better opportunity for the IndyCar event.

“We’ll see you in Pocono. I don’t have any more I want to say about that. I’m not sure. Stephen Starks (INDYCAR executive) is sorting it out right now and it might not be any sooner than when we put the schedule is out. We are thinking around Labor Day, but that is not etched in stone, yet.”

An IndyCar Series race at Pocono is quite stunning because of its very long straightaway and three completely unique turns. The long and wide frontstraight allows the field to fan out four-, five- even six-wide on starts and restarts. The speed is breathtaking.

But there is also a high risk of danger.

Two of the grimmest moments in INDYCAR this decade has happened in the last four years at Pocono Raceway. Justin Wilson was killed when the nosecone from Sage Karam’s race car hit him in the helmet after Karam crashed coming out of Turn 1 while leading the race in 2015. That incident has been the driving force behind INDYCAR’s decision to consider and test a protective Aeroscreen, that could be on the cars in 2020. 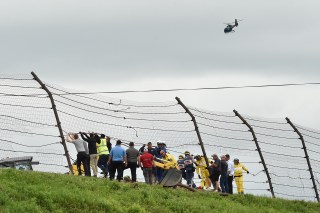 Last year, rookie driver Robert Wickens tried to go underneath Ryan Hunter-Reay’s car coming out of the Turn 2. When the turn closed up, Wickens car drove over the top of Hunter-Reay’s, launching Wickens’ machine into the fence. The high speed combined with the rapid deceleration and reverse spin severely injured Wickens, including a spinal cord injury that has left him paralyzed from the waist down.

Although Wickens has made dramatic improvement in his recovery and rehabilitation, he has yet to regain full control of his legs.

Despite that, many drivers in the field respect Pocono, but are not fearful to return.

“I’m not hesitant at all to go there,” driver Graham Rahal said. “I really enjoy the track and it’s a tremendous challenge. It is fast and with speed comes danger. Unfortunately, last year we experience that last year and in 2015 we experienced that with Justin Wilson.

“Does it weigh on your mind? I’m human, so yes, it does. It’s hard not to think about those people when you are there. At the end of the day, though, there is no hesitance. You know it’s your job and you go out there to do your fest and be safe and smart and know the balance between risk versus reward.

“I’m not going to think twice about it. We’re going to go out there and do the best job we can do, put on a good show for the fans and go from there.”

Rahal is a strong advocate that Pocono needs to be on the NTT IndyCar Series schedule for many reasons, including its proximity to major population areas of the Northeastern United States and that the series needs more oval tracks.

“I’m a traditionalist so to me, I love Pocono,” Rahal said. “Obviously, I don’t set the schedule. To me, we need to be at venues the crowd comes to. At Mid-Ohio, we had a huge crowd and have at many other races. I wish we had a better crowd at Pocono, to be quite frank. It’s a thrilling race. The start there is unbelievable with four, five-, even six-cars wide. I think it’s the best show that gets put on at Pocono every year.

“But our sport is driven by demand. Where do the fans want us? I’m sure that will be the biggest and heaviest part of INDYCAR’s decision of what we do.

“But I’m a traditionalist. I love Pocono. I think it’s one of the most beautiful parts of the country. It’s a very demanding race track. It’s a big market for our family with all of our dealerships in that area. It’s important for us.

During NASCAR’s race at Pocono back in June, Nick Igdalsky and Pocono Raceway president Ben May indicated they had put together a proposal to remain on the INDYCAR schedule and were awaiting more discussions with the sanctioning body.

Next season, Pocono loses one full weekend of racing action as NASCAR will stage a doubleheader in June with full races on Saturday and Sunday of that weekend. 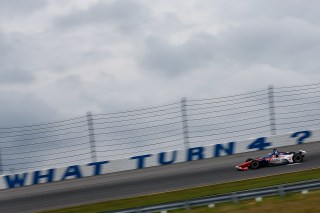 That creates the possibility that the August NTT IndyCar Series race will be more important to Pocono because of the absence of a second NASCAR weekend. It also gives Pocono Raceway officials a better opportunity to promote and market the IndyCar Series race, which would hopefully increase the crowd because of its added stature.

Rahal believes INDYCAR should take that into consideration and bring Pocono back, at least for 2020 to see how it is able to manage that opportunity.

“Yes, I would,” Rahal said. “I’m a fan of Pocono. I’m not one of the guys that sits there and says we shouldn’t be there. We always talk about speed and danger but that’s the case at a lot of the places we go. I’m fine with it. There will be opportunities for IndyCar to go to tracks and do things and tracks will once again need us and have IndyCar be a big part of their format going forward. I think what Pocono is doing next year is really cool with two Cup races in one weekend and that opens the door for us.

“Everybody is referencing Richmond in this deal and what is really interesting about Richmond is if you look at the TV ratings for IndyCar, Richmond is always in the top five of most viewership. That baffles me, to be very honest. But that’s the balance that IndyCar is going through right now.

“Is it an opportunity at Pocono? Yes, it is. Is it a guarantee of a better crowd? Perhaps not. I believe the time of year we go there is beautiful, and we put on a great race, so I don’t understand why we don’t draw a better crown than we do.

“Everybody needs to work together and find a way to make that happen.”

With New York City to the East, Philadelphia to the South, Boston to the Northeast and Pittsburgh to the Southwest, Rahal believes that based on population alone, INDYCAR needs to be at Pocono. 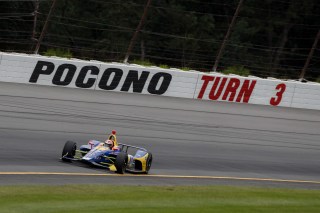 But, how can the size of the crowd increase?

“I’m not a promoter,” Rahal admitted. “I have a lot of marketing ideas, but I’m not a marketer. But we need to push these race weekends become big events. You have to connect between what is popular at the time, and that includes celebrities and people. Somehow, you have to bring in bands that are desired.

“The Formula One race at COTA, the crowd was declining at a severe rate. The next thing you know, they are bringing in Taylor Swift and Justin Timberlake and the crowd doubled. We need to continue to figure out how to make these events bigger. There is a lot of reference to the ovals we go to. There is really not a lot going on until the race. From a fan’s perspective, how do we get them more engaged for the entire time?

“Philly is a huge market, New York City is nearby, Pittsburgh is a big market, there is a lot of population that has to be tapped into. We just have to find a way to continue to push and for lack of a better term, make IndyCar racing sexy again and appealing and make it an event where people can’t miss.”