LONG POND, Pennsylvania – Pocono Raceway President Ben May and CEO Nick Igdalsky are emphatic that they want the 2.5-mile triangle-shaped speedway to remain part of the NTT IndyCar Series schedule.

INDYCAR officials, however, have not responded and as of Saturday night, have not met with either May or Igdalsky fueling speculation that Sunday’s ABC Supply 500 may be the last time Indy cars compete at the legendary track that was designed and built specifically for this type of racing.

IndyCar racing dates all the way back to the track’s opening in 1971.

Pocono’s time with Indy car racing has had several challenges. It was a major race on the schedule from 1971 to 1989, but after the ’89 race, the sanctioning body at that time, CART, dropped Pocono from its schedule.

It did not return until the current INDYCAR sanctioning body added it to the 2013 schedule.

“Nick and I would like to have IndyCar back and undoubtedly, it’s in their court right now,” May told NBC Sports.com Saturday. “If it’s not in the cards, we are ok. We hate it for the fans. That is the most disappointing part; if this was their last opportunity to see IndyCar racing, it’s a shame we wouldn’t have been able to tell them that.”

May and Igdalsky have said there has been double-digit growth every year in attendance. INDYCAR CEO Mark Miles and some series team owners, however, don’t believe the crowds of about 20,000 to 25,000 big enough to return.

INDYCAR is considering replacing this event with a race at Richmond International Raceway – a three-quarter-mile short track that hosted the IndyCar Series from 2001-2009.

“We’re a little bit up on attendance from last year and based on the forecast for Sunday, which looks decent,” May said. “I would anticipate the crowd to be up.

“The race is sponsored, and the crowd should be up.”

Next year, both of Pocono’s NASCAR Monster Energy Cup Series races will be held on the same weekend in June, creating a double-header. That could make an IndyCar Series weekend even more attractive to Northeastern race fans in 2020.

“If IndyCar is not in the cards, this company and this family won’t lay down and say, ‘Well, we’ll just have one Cup weekend and that will be it.’ Maybe it won’t be racing but something else.

May said INDYCAR has yet to request another meeting before Sunday’s ABC Supply 500 NTT IndyCar Series race. However on Sunday, both INDYCAR CEO Mark Miles and INDYCAR Vice President Stephen Starks arrived at the track. When asked about whether INDYCAR would return to Pocono, Miles told NBC Sports.com, “Let’s see what today’s crowd looks like.”

Igdalsky later told NBC Sports.com that he met with Starks and indicated that he was “sincere” in his attitude involving Pocono Raceway’s situation.

Pocono is even willing to be part of a three-race rotation in the Northeast including Watkins Glen International and Richmond International Raceway. Under that arrangement, each track would rotate a race date on the IndyCar Series schedule, meaning IndyCar would compete at that track once every three years.

“Stephen was asking me for more details on the rotation and wanted to talk to me some more regarding that,” Igdalsky told NBC Sports.com.

Starks also spoke briefly with NBC Sports.com and said, “We haven’t said anything yet because we haven’t made a final decision yet. The schedule remains to be finalized and we are in the process of coming to a decision.” 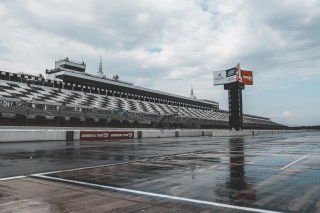 Some of the critics think Indy cars have outgrown Pocono Raceway and the speeds are too fast for safety. But auto racing has always had an inherent amount of danger, which is part of its dark allure.

“This is a very fast, very dangerous game that everybody plays,” May said. “The show is amazing. It’s a great show.

“Unfortunately, it has some very sad times.”

One of those came in the 2015 NTT IndyCar Series race when Justin Wilson was killed after the nosecone from Sage Karam’s crashed car hit him in the helmet. He died the next day.

Another came in last year’s ABC Supply 500 when Robert Wickens because paralyzed from the waist down after a horrific crash in Turn 2 that launched him into the tire fence. Wickens survived and had made remarkable recovery in his rehabilitation.

The drivers, however, look fear in the eye and don’t flinch at Pocono.

“I love this track,” said 2013 Pocono winner and five-time NTT IndyCar Series champion Scott Dixon. “We haven’t probably had the best runs in the last couple years, but that’s what makes it so good when you do get it right. It’s very difficult to get the combination with one and three correct, feel comfortable around the circuit.

“I hope we do come back. We just have to wait and see, I guess.”

Will Power is a two-time Pocono winner with back-to-back victories in 2016 and 2017. He was second at Pocono last year.

“I love the track,” Power told NBC Sports.com “I love it. Obviously, it’s always a proud moment when you win a race. If you win back-to-back 500-milers, it’s a big deal.

“It’s a cool track. I feel like the more ovals, the better for me. I really enjoy them. It would kind of be disappointing if it went away. Obviously, I had nothing to do with that. It’s obviously INDYCAR negotiating.

“Hopefully I can get another one.”

May believes that auto racing is unlike stick-and-ball sports because fans can attend a baseball or football game and still have part of the day to do other things. Auto racing, however, is usually an all-day affair where crowds travel from a great distance to get to the track, spend hours watching the race, then have to travel the same distance home.

“One-third of the US population lives within 300 miles of Pocono Raceway,” May said. “That is a fact. Why they are not here in droves? I don’t have that answer.

“Our marketing is strong. We put equal marketing in this race as we do the NASCAR race. No doubt, IndyCar has shown impressive growth and growth is real. And we like being part of it.

“All we continue to say is we would like to see them here next year.”

Marcus Armstrong was a Scott Dixon fan his entire life, and when he was 8, the aspiring young racer asked his fellow New Zealander to autograph a helmet visor that he hung on his bedroom wall.

Next year, Armstrong will be Dixon’s teammate.

Armstrong was named Friday as the fourth IndyCar driver in the Chip Ganassi Racing lineup and will pilot the No. 11 next season on road and street courses.

A driver for the five oval races on the 17-race schedule will be named later.

The No. 11 is essentially the No. 48 that seven-time NASCAR champion Jimmie Johnson drove the last two seasons, with Chip Ganassi making the change to run four cars numbered in sequential order. Indianapolis 500 winner Marcus Ericsson drives the No. 8, six-time champion Dixon drives the No. 9, and 2020 IndyCar champion Alex Palou drives the No. 10.

Incredibly grateful to @CGRTeams for this opportunity in IndyCar. 2023 starts now 🇺🇸 pic.twitter.com/Q7hp66Hxkv

So just who is the second Kiwi in the Ganassi lineup?

A 22-year-old who spent the past three seasons in Formula One feeder series F2, a Ferrari development driver in 2021, and former roommate of Callum Illot and former teammate of Christian Lundgaard – both of whom just completed their rookie IndyCar seasons.

“I’ve always been attracted to the IndyCar championship because it’s one of those championships that’s been really well televised in New Zealand since I was young, mainly because of Scott and his success,” Armstrong told The Associated Press. “As time progressed, as I got closer to F1 and single-seaters, the attraction to IndyCar grew just because of how competitive the championship is – I like to challenge myself and the level of competition in IndyCar is remarkably high.”

Armstrong, from Christchurch, New Zealand, was set to travel from his current home in London to Indianapolis this weekend to meet his new team. He won’t need an introduction to Dixon, the 42-year-old considered the best IndyCar driver of his generation and Armstrong’s unequivocal childhood hero.

Last season, Dixon earned his 53rd career victory to pass Mario Andretti for second on the all-time list. Dixon has driven for Ganassi in all but 23 of his 345 career starts.

“For a long time I’ve been a Scott Dixon fan. I don’t want to make him cringe with our age difference,” Armstrong told the AP.

He convinced his father after winning five national karting championships to allow him to leave New Zealand for Italy at age 14, where he moved by himself to pursue a racing career. Armstrong said as soon as he’d received parental permission, he’d never look back.

Armstrong was in Formula 4 two years after his move to Italy and won that title in his first season. He won four races and four poles in F3 in the 2018 and 2019 seasons, then collected four wins and eight podiums in three seasons of F2.

“Maybe it’s a strength, or maybe it’s a weakness, but I always thought I was capable of doing great in the sport,” Armstrong told the AP. “I think you probably have to succeed in the sport, you need to believe in yourself. I always pictured myself being in IndyCar.

“As Scott’s teammate? I can’t specifically say I saw that. It’s an extraordinary chain of events.”

Armstrong becomes just the latest driver to leave Europe, where F1 is the pinnacle but has only 20 seats each year. Alexander Rossi began the trend in 2016 when the American left F1 and won the Indianapolis 500 as a rookie. He’s been followed by Ericsson, last season’s Indy 500 winner, Romain Grosjean, Illot, Lundgaard, and on Thursday three-time W Series champion and Williams F1 reserve driver Jamie Chadwick was announced as driver for Andretti Autosport in IndyCar’s second-tier development series.

Armstrong said he could have remained in F2 for a fourth season, but he’d been watching IndyCar for so long, and after conversations with Illot and Lundgaard, he decided to make the move to what he believes is the most balanced racing series in the world. He tested for Dale Coyne Racing at Sebring in October.

He doesn’t know if European racing is done for good, just that he wants to be in IndyCar right now.

“I don’t want to think too far into the future, I’m just grateful for this opportunity that is standing right in front of me,” Armstrong said. “I want to perform as well as I can in the near future and just consolidate myself in the fantastic chance that is IndyCar and just do my best.

“I’m not looking at F1 as a landing spot – I am looking at IndyCar, and that’s exactly why I am here.”