LONG POND, Pennsylvania – In his prime, there were few racers fiercer, determined, tenacious and aggressive than Tony Kanaan. His driving style was once described as watching a “Pit Bull chasing a Pork Chop.”

That, however, was a very long time ago, during his glory days in the old 7-Eleven Honda at what was then called Andretti Green Racing.

Sure, Kanaan would enjoy more moments of glory with other teams, including his lone Indianapolis 500 victory in 2013 for KV Racing.

Over time, however, Kanaan could not find the right combination to return him to the level that made him a fan favorite. He thought he had it at Chip Ganassi Racing from 2014-2017, but instead of contending for championships, it was a challenge to finish the season in the top-10 in the standings.

His last IndyCar Series victory came in the final race of the 2014 season at Auto Club Speedway in Fontana, California.

By 2017, Kanaan left Ganassi and joined AJ Foyt Racing, owned by the cantankerous and irascible American racing legend who was the first driver to win the Indianapolis 500 four times in his career. Foyt hired the driver from Brazil, because “he races like I did.”

Instead of returning to a highly competitive level, watching Kanaan try to get up to speed in the No. 14 ABC Supply Chevrolet was like watching Michael Jordan play basketball for the Washington Wizards instead of the Chicago Bulls. 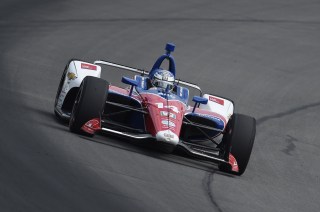 At 44, Tony Kanaan is the oldest driver in the NTT IndyCar Series. He turned Saturday’s practice session into a “Blast from the Past” as the fastest driver with a speed of 216.354 miles per hour in the No. 14 ABC Supply Chevrolet for AJ Foyt Racing.

“I was happy with my car in traffic,” Kanaan said. “We can all run close in traffic. We worked hard in traffic because of where I’m going to start. Trying to find the right adjustments to be able to keep up is what we did all afternoon.

“I don’t think you will see anybody dominating this race. It’s a tough track. That’s all we can do. We will try to pull a TK start on it, gain five or six positions, put ourselves in the top 10. It’s a 500-mile race; a lot can happen.

“This has always been a good track for us. We always ran strong on the superspeedways. I’m happy. It’s a good day for us. Bummer for qualifying that we didn’t have a chance to do it. I’ll take it. It’s been a while since we have been that competitive.”

Because the starting lineup is based on points, Kanaan will start way back in 18thplace.

“It’s quite a ways in the back, but we will fix that Sunday,” Kanaan said. “We’re having a very difficult year. Anything we can do to motive ourselves; we are doing right now.

“This will help pump the guys up.”

Team owner AJ Foyt was not at the track Saturday, choosing to stay at his ranch in south Texas.

“He knows already,” Kanaan said. “I have to call him to come up here for the race.”

That is true. Who knows where Kanaan would have qualified if the qualifying session had not been cancelled because early-morning rain and the lack of a medical helicopter able to fly through the storm forced INDYCAR to come up with an alternate schedule.

Kanaan’s speed won’t be rewarded in the starting lineup, but it may be significant in the race. 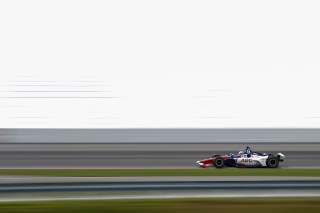 “It’s a shame, but it’s not something we can control,” Kanaan said. “We made the best out of it in this session. I was pretty confident coming to Pocono that we had a very competitive car. We were pretty competitive at the Indianapolis 500 and it’s a similar setup to what we used.

“I’m happy. Starting in the back, at this track, is not easy, but this was a good day for us.”

In the 103rdIndianapolis on May 26, Kanaan’s Chevrolet was competitive, but he ran out of fuel, and went down one lap. He was able to race his way from 23rdand finish ninth on the lead lap.

“We have a pretty good possibility to have our best finish of the year, here,” Kanaan said. “We’ll put ourselves in the top 10 and go from there.”

Despite the disappointing season, Kanaan and his crew have stuck together.

“There is no mystery how much we are struggling,” Kanaan said. “That has taken a toll on the team. It’s not us. It’s really easy to point fingers at each other and we are not doing that.

“I’m not the type of person that gives up very easily. We can’t hide that we are struggling. It’s not the first time I have been in this position and it won’t be the last time. We have a lot to go. I have nothing to prove.

“All I can do is put my head down and work with the team to make them better. That’s all I can do.”