LONG POND, Pennsylvania – For the second straight year, a massive crash at the start of the ABC Supply 500 NTT IndyCar Series race at Pocono Raceway brought out the Red Flag to stop the race.

It also left many of the drivers involved in the crash seeing red and blaming Takuma Sato of Japan for causing a crash on the very first lap of the 200-lap contest.

“It all hand-grenaded,” Ryan Hunter-Reay said of the crash.

At 5:40 p.m. Eastern Time, Dr. Billows said Rosenqvist had been checked and cleared for release and was expected to leave the hospital shortly.

It also put a severe blow into Alexander Rossi’s chances at the 2019 NTT IndyCar Series championship after his No. 27 Honda was damaged in the crash. His Andretti Autosport crew, however, repaired the car during a 45-minute, 24-second Red Flag, which is against INDYCAR rules. James Hinchcliffe’s team and Ryan Hunter-Reay’s crew also worked on their car during the stoppage in the race and all three teams incurred a 10-lap penalty once work is completed on their racing machines.

The crash happened entering the Turn 2 “Tunnel Turn” portion of the 2.5-mile triangle-shaped speedway, very close to the area where a first lap of racing incident on Lap 7 last year left Robert Wickens paralyzed from the waist down after his car went into the tire fence, severely injuring the driver. That crash happened when he attempted to drive underneath Ryan Hunter-Reay, but once the turn closed up, Wickens’ Honda drove over the top of Hunter-Reay’s Honda and launched into the fence.

This year, it was Sato that was darting from side-to-side when he made contact with Rossi’s Honda, triggering a multi-car crash that also involved Hunter-Reay for the second year in a row. Rosenqvist’s Honda went airborne and into the fence, but not as severe an impact as Wickens in 2018. The rear of the car rode along the top of the SAFER Barrier with the nose of the car scraping across the asphalt.

Hinchcliffe was also involved in the crash.

“I can’t even begin to understand how after last year, how Takuma thinks any sort of driving like that is acceptable,” Rossi said after he was cleared and released from the Pocono Raceway Infield Care Center. “To turn across two cars at that speed in that corner at the start of a 500-mile race is disgraceful, upsetting and probably cost us a championship.

“It’s upsetting because this team works hard. We’ve got a couple of days to rebound and we’ll just go for wins from this point on.”

Rossi entered the race second in points, just 16 behind championship leader Josef Newgarden of Team Penske. Because Saturday’s qualifications were cancelled because of rain, the field was set based on the current NTT IndyCar Series championship. Rossi started second but had a bad start at the drop of the green flag and that dropped him a few positions, ultimately putting him in harm’s way when Sato’s car collided into him. 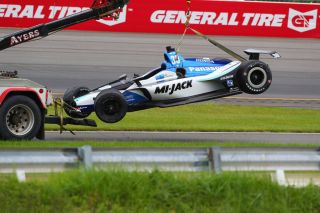 INDYCAR officials have assessed a post-race review on Sato for “avoidable contact.”

Hunter-Reay believes the penalty should be a harsh one.

“My view is this is ridiculous. Thank God everybody is alright. I thought everybody learned their lesson last year at the start of a 500-mile race. I had a nice, clean run on Rossi and was three-quarters past him, then all of a sudden, I was backwards and saw myself hit the inside wall, then I saw the field coming at me in traffic.

“I thought this could be bad.

“It’s so unfortunate. It’s the start of a 500-mile race. I was minding my own business and here I am talking to people outside the Infield Medical Center.”

Hunter-Reay said it is so important to gain positions on starts and restarts because track position is very important at Pocono instead of past packages where drivers could race through the field.

“I backed out of Turn 1 and entered Turn 2 and it unfolded in front of us,” Hinchcliffe said. “We were heading into Turn 2 three-wide and I knew that wasn’t a good idea, so I backed out. I thought that was going to save us. It happened in front of me, but the wreck moved down to the inside and slid out to where I was and nowhere, I could go.

“It sucks. It’s a 500-mile race. I don’t know how many times we have to do this before people figure out that you can attack all you want, but you don’t have a chance to win it if you are in the fence.

“It’s just crazy. It’s such a waste of time and energy for people to come out here and do a 500-mile race and half the top 10 end up in the fence in Turn 2.” 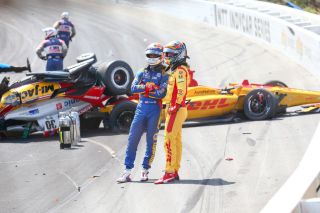 Hunter-Reay was asked by NBC Sports.com if the drivers need to start self-policing the sport.

“It has to be,” he said. “Jesus, it’s the first lap of a 500-mile race. Guys are driving like it’s the last lap of the Indianapolis 500. We need to get it together. When we’ve used the helicopter here to take drivers to the hospital the last four years, you think we would get that.

“It’s really unfortunate. It never should have happened. It absolutely should have never happened. Every pass in a 500-mile race at the start needs to be 100 percent.”

Sato was the subject of blame and tried to answer the charges from the other drivers that he was responsible.

“I’m worried about Felix and hope he is OK,” Sato said. “I feel sorry for all the guys in the championship. But Ryan and I were racing in Turn 1 Alex got a slow start and we both went right-and-left. I thought I was all clear and all of the seams grabbed the car and unfortunately, we made contact.

“I was not really overaggressive overtaking anything. People need to watch the replay before making that decision. I thought I was all clear and kept the steering wheel straight, but we all got to together.

“It was so close, three-wide and everyone together. Alex and I hit together.”

Graham Rahal was running sixth at the time of the crash and was able to describe what he saw involving his Rahal Letterman Lanigan Racing teammate, Sato.

“The disappointing thing is you have 499 more miles to go and you have to be patient,” Rahal said. “We know the risks of this track. When you see that, it’s tough.

“Takuma went three-wide and gave him the sign he was coming but there was no space to do that. We were fortunate we snuck through there and didn’t get run over from behind. We’re all right and will try to go racing from here.

“You know how far you can push this. At 226 miles an hour, when you are entering Turn 2 here, you are boogying. You have to play it through. It’s a 500-mile race and you have to realize that.”