Felix Rosenqvist admits he doesn’t recall when he got into the fence at Pocono Raceway during Sunday’s first-lap crash that sent him to the hospital because he “had my eyes closed.”

In an NBCSports.com exclusive, Rosenqvist spoke publicly for the first time since he was part of the massive crash at the start of Sunday’s ABC Supply 500 at Pocono Raceway.

The crash started when Takuma Sato’s Honda made contact with Alexander Rossi’s Honda, sending both drivers into Ryan Hunter-Reay’s Honda.  Hunter-Reay was on the low side of the track, three-wide heading into the tricky Turn 2 “Tunnel Turn” on the triangle-shaped oval.

Behind them was Rosenqvist, a rookie driver from Malmo, Sweden, who saw what was taking place in front of him and he immediately slowed. He thought he was safe.

“I saw when the three cars collided, and the first thing you do is lift the throttle because you think it’s going to be a caution and you see a dangerous situation ahead of you,” Rosenqvist told NBCSports.com Wednesday. “I thought I was past everything. 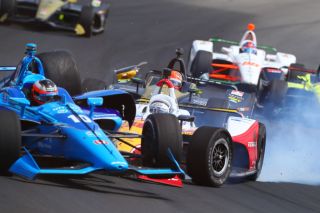 “He hit my left-rear. Then I closed my eyes.

“I didn’t know I was in the catchfence or the wall or anything afterward until Dario Franchitti told me in the Medical Center. I don’t have any good memories, because I didn’t keep my eyes open.”

Sato’s damaged Honda already had crashed into the fence before his car then started to ricochet to the left. That’s when he made contact with Rosenqvist’s Honda, sending it airborne.

“It was very hard contact, because Takuma wasn’t moving very fast at all at the time, and I was still going 160 or 170 mph,” Rosenqvist recalled. “It shot the car like in a flip motion. My impact with the wall wasn’t that big, but my car had a lot of spinning momentum.

“When it smacked the front in the wall, my head flipped around big-time in the car. I felt a big headache afterwards.

“Otherwise, it wasn’t too bad.”

Rosenqvist said it seemed surprisingly easy that his car got over the wall. Some IndyCar drivers think the walls at Pocono Raceway appear lower than other superspeedways, but Rosenqvist doesn’t know that for a fact.

“One part of my car always touched the track before getting up there,” Rosenqvist said. “Robert Wickens ended up in the fence last year, and I ended up there this year. It seems pretty likely the cars end up there somehow. I don’t know why or the technical reason for that.

“I wish the wall was higher because it seems very easy for them to get up there.”

Rosenqvist got a sharp pain in his head and that kept him from opening his eyes while the car was rotating. He admits he was lucky the rear of the car never got above the wall because the G-Forces would have thrown it into the fence and made the crash even more severe.

“Somehow, it was the luckiest of every outcome that happened to me,” Rosenqvist said.

A raging debate has started about whether the NTT IndyCar Series should compete at Pocono Raceway because drivers have been airlifted out of the facility in each of the past four years, including one fatality in 2015 when Justin Wilson was killed.

Robert Wickens also was paralyzed from the waist down after he crashed into the catchfence in Turn 2 at the start of the 2018 Pocono race.

Defenders will point out that it’s also risky to run in the Indianapolis 500, too. High-speed racing is risky, period, and what happened at Pocono can happen elsewhere.

“All three superspeedways we do are the most dangerous tracks you can run, but when you do Indy, you have a lot of practice running with other cars,” Rosenqvist said. “I felt really ready for the race at Indy, but at Pocono I had barely any running in traffic at all before the race started.

“You leave a lot to chance when you come up on the first lap, and you don’t know what racing other cars is like. It’s always different. You leave a lot in the hands of the driver, and that is more of the dangerous thing than the track itself.

“I believe the wall should be higher, but that goes for all of them.” 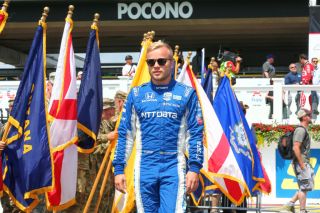 Rosenqvist has watched the onboard video on his car and the three impacts with the fence took the front wing and then several chunks out of his tub.

“The tub really did its job, so I had no leg injuries,” he said. “Plus, I’m pretty short.

“Physically, I feel almost fully recovered. I still have a light headache, but nothing big. Another one or two nights of sleep, I’ll be completely ready to drive a car again.”

Rosenqvist underwent a series of tests on Tuesday and has been cleared by INDYCAR’S Medical Staff to return to competition. That begins with Saturday night’s Bommarito Automotive Group 500 at World Wide Technology Raceway at Gateway near St. Louis.

His No. 10 Honda will be sponsored by Monster Energy for the first time.

Rosenqvist has no reservation returning to action.

“I don’t feel any different going into Gateway,” he said. “I was very honest with my feelings at Indy after practice because I lost my confidence. I lost the car and didn’t know how. I thought I had it under control. That is the worst for a driver when you try to figure out what is wrong, and you can’t figure it out.

“But if I get taken out by someone in a freak accident, I’m not going to think any differently going into Gateway. I felt good going into Pocono and have felt good at every oval we have done.

“I think we can do pretty good, to be honest. I expect Gateway to be my best oval because I have done well in testing. Now is the time to get some good results, for sure.”