MADISON, Illinois – As the NTT IndyCar Series arrived in the St. Louis area for Saturday night’s Bommarito Automotive Group 500, it’s a chance to flip the script and focus on a short oval after surviving last Sunday’s superspeedway race at Pocono.

The 1.25-mile World Wide Technology Raceway classifies as a “short oval” although it is over one-mile in length. But with its tight turns and relatively flat surface, it will feature a more traditional style of racing than the high-speed, high-risk superspeedway formula.

“It’s typical short track racing,” Power told NBC Sports.com. “You have to be able to get through traffic. It’s pretty tough there. It’s such a pity we can’t open that second lane because it is there. The only reason it doesn’t open is everyone falls in line at the start and the inside line gets rubber and the outside lane gets the marbles and that destroys the lane. If everyone went the second lane during the first stint of the race, it would come in and you would have a fantastic race.

“It’s really difficult to pass so you have to be quite aggressive to pass and somebody is always going to be the loser in that and get up in the marbles. A multiple lane, short oval track, there is nothing better. Iowa is like that and it creates great racing. We can have great short oval racing if we somehow create a second lane.”

Although the shorter oval with slower speeds doesn’t eliminate the risk, it lessens it to a degree because of the reduction in speed and impact if a car hits the SAFER Barrier.

Power, who won last Sunday’s ABC Supply 500 at Pocono, believes with all of the safety innovations that have been instituted by INDYCAR in recent years, the greatest safety measure remains the person behind the steering wheel.

Last Sunday’s race at Pocono was marred for the second-straight year by a massive crash on the first lap that damaged the fence, sent one driver to the hospital for evaluation and created days’ worth of dialogue from the drivers involved.

Power is among those that believe a driver can impact safety the most by making the right decision at a moment of high risk.

“That’s true, there’s no question it’s up to the drivers,” Power said. “The formula the series mandates, they are very much on top of these days to make it good racing, safer and more about the driver. It just blows me away that in a 500-mile race that people do that. I understand it’s hard when you have a run on someone and can make up a couple easy positions, it’s hard to sit back. It was hard to pass last year, but this year was a little easier.

“There just has to be a higher level of respect when you are racing at a superspeedway. You have to be willing to back out of a move unless you are 100 percent it is going to come up. I lift unless there are 10 laps to go. Then, you are very respectful of the speed on a superspeedway.

“I couldn’t believe my ears when I heard yellow after another big crash in Turn 2. I thought after last year, everyone would have chilled out. It was three cars in a tight spot, too close together at very high speed.”

With so many veteran drivers in a series that features some outstanding young talent, Power was asked if the more experienced drivers need to play a role in speaking out to help prevent crashes before they occur.

“It’s tough. We are all out there racing and everyone wants wins these days. If you can get a position, you will.

“It’s definitely on the drivers. We all back bad decisions at times but on a superspeedway, I really feel like stepping back and being willing to back out. Simon Pagenaud and I were side-by-side down the backstretch and I was even a little ahead, but it was really early, and I decided to back down and tuck behind him.

Power believes there is no one single driver that should bear the responsibility of last Sunday’s crash, although it appears obvious Sato played the biggest role. 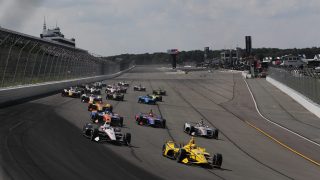 “The first lap is double-file, and everyone was packed up,” Power said. “I don’t see it as anyone’s fault, it was just unfortunate. I feel bad for Pocono these accidents happen. I would not say that accident was overly aggressive driving. It wasn’t.

“It was just three guys going straight that were just too close together.”

What was most concerning to some was it was the second year in a row that a major crash happened at the start of the IndyCar Series race at Pocono. After dealing with last year’s crash that left Robert Wickens paralyzed from the waist down, drivers didn’t need to be reminded of the risks versus reward of daring moves at the start of the race.

“That’s why a lot of people keep doing the same thing they do, they don’t think about what they did last time, so it continues to happen,” five-time NTT IndyCar Series champion Scott Dixon told NBC Sports.com. “That’s the first sign of insanity, isn’t it?

“It’s not so easy to self-police because it becomes paybacks and you can’t do that. For all of us, we just have to be glad that everybody in that crash is OK.”

Hunter-Reay indicated the drivers need to have a little more self-respect for each other and take care of each other better in risky situations.

“As a group, we need to realize we need to take care of each other, especially on the first lap of a 500-mile race,” Hunter-Reay told NBC Sports.com. “Everybody races hard, no doubt about it. We need to focus on higher percentage moves on a superspeedway. If this happened on a road course, nobody is talking about that because the consequences aren’t as severe.

“We can have a discussion among ourselves and address that, everybody is going to race hard and we are racing inches apart and sometimes these things are going to happen. I think as a group we can discuss that.

“I don’t know about policing, as much as the drivers need to have mutual respect.

“I love Pocono. I won there. I really enjoy the race track. It’s very challenging. It’s a superspeedway unlike any other. It’s unfortunate these things have happened, but they could have happened elsewhere.”