MADISON, Illinois – Josef Newgarden’s stock is rising in the battle for the NTT IndyCar Series championship, Alexander Rossi’s fortunes have dipped while Simon Pagenaud and Scott Dixon are setting up to make a charge over the final three races of the season.

Rossi appeared to have the momentum entering last Sunday’s ABC Supply 500 at Pocono Raceway. He was just 16 points out of the lead entering the race, but that momentum hit a major obstacle when he was involved in the massive crash in Turn 2 at the start of the race.

Instead of challenging for victory, Rossi finished 18th. Newgarden quietly finished fifth and that increased his lead in the championship to 35 points entering Saturday night’s Bommarito Automotive Group 500 at World Wide Technology Raceway at Gateway.

Rossi knew his chase for the championship took a pretty big hit last week at Pocono.

“It’s not good,” Rossi said last Sunday. “We’ll just go for wins from this point on.” 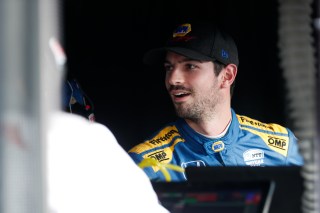 “It’s never easy, for sure,” Rossi told NBC Sports.com after his qualification attempt. “The track isn’t particularly challenging, we missed it today. I don’t know why. We’ll have to try and figure it out.

“Last year, we had a car that was really quick. It was a different experience than we have had this weekend. Right now, the No. 27 NAPA Honda is not where it needs to be. Two-groove racing isn’t going to happen here Saturday night.”

Rossi’s team is going to “Kitchen Sink” the car, meaning the changes are going to be really big.

“All bets are off at this point,” Rossi said. “We’ll take some big risks and try to get it down with some pretty aggressive strategy. We’ll know Saturday night around 10 p.m. if it pays off.”

“The first lap was very difficult,” Pagenaud said. “The car was very active in turn three then turn four. It came alive on the second lap, so it was time to be very aggressive on the second lap. I am very happy with the performance. The 22 team did a tremendous job. Team Penske and Chevy as usual gave me a very fast car.”

He is attempting to win the Indianapolis 500 and the NTT IndyCar Series championship in the same season. 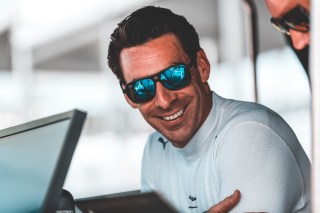 “Personally, I’m pretty excited that we gained points on Josef for a few races now,” Pagenaud said. “It’s a championship, the best may win over the year. Obviously, he’s my teammate. I can only think of good things for him. But I also want to win, so does Scott, so does Rossi.

“It’s good to be in it. I think there’s three races to go, all the chances in the world for our team. We’re going to keep pushing. That’s what we’ve been doing. Just keep pushing, doing what we do, try to win races. That’s going to be the name of the game till the end. I love it.”

Dixon qualified eighth in the No. 9 PNC Bank Honda with a two-lap average of 184.293 miles per hour. He is 52 points out of the lead and very much in contention for the championship with three races remaining.

“We struggled with getting our car up to speed, drivability was really weird, it was hard to keep the throttle up,” Dixon said of his qualification effort. “I think the tire pressures were far too low.

“I think there are lots of strategies to get to the front. We’re starting eighth, which is not too bad, but not great.”

Is Dixon going to be a “Bull on a charge” in Saturday night’s race to close in on Newgarden’s championship lead? 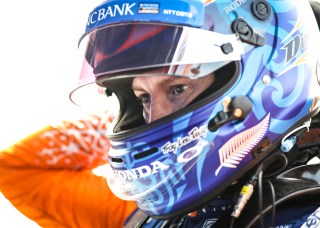 “We’ll have to be, we’re going to have to go after it,” Dixon said. “You have to do that, but you have to do it cautiously, too.

“I think honestly until you’re out of it, you’re never really out of it. I don’t know what the points gap was going in ’15 for us, behind Juan Pablo Montoya, but I think it was in the 60s(actually, 42).It’s definitely achievable from the point deficit right now.

“There’s still a long way to go. I think the next two will be pretty interesting. St. Louis is going to be a lot of fun. Then Portland will be interesting. For a lot of us, too, it was interesting to get back to Laguna for a while. Some teams struggled more than they thought they would. Laguna will be a pretty interesting race with double points.”

For now, Newgarden appears to have the advantage, but he isn’t ready to relax. If anything, the anxiety is about to increase.

“If I finish 15th and Rossi finishes third, you do that a couple races in a row, we’re pretty much like neck-and-neck going into Laguna,” Newgarden told NBC Sports.com. “At Laguna, you could have a 60-point lead going in there and you still have to 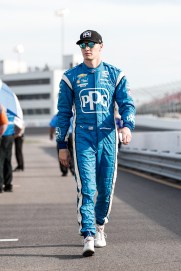 have a pretty good day. You can’t walk the thing. Probably have to finish 11th or 10th, which is still hard. It’s not easy to show up and finish in that spot.

“To me it’s still wide open, mainly because of double points. I don’t love it because it’s tough that it puts that much emphasis on a season finale. We all know the score going into the season. We know how the game works. I think you got to play to how the championship is laid out.

Unless you have a 100-point lead, you’re not going to be comfy going into the finale.

“Plus, Laguna is an oddball. We don’t know what that’s going to bring. We could be terrible there. If we are scrapping to finish 10th, we have a 40, 50-point lead, that’s not enough. It’s funny this points discussion. It is super close, in my opinion, still, amongst everybody.”