ST. LOUIS, Missouri – Josef Newgarden has led the NTT IndyCar Series standings for all but one race this season by having the ability to drive a fast car and win races.

Thursday night at Busch Stadium, Newgarden proved he has a pretty good fastball, too.

The Team Penske driver and 2017 NTT IndyCar Series champion threw out the first pitch before the St. Louis Cardinals game against the Colorado Rockies. Without warming up, Newgarden threw a perfect pitch, right down the middle of the plate.

“It was a strike, too,” Newgarden said as he went down the tunnel and saw his Team Penske crew sitting in the row above the tunnel. “That was pretty good. 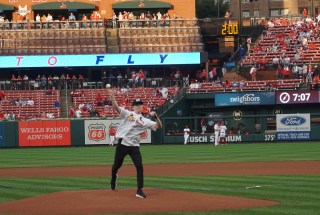 “For literally zero practice, that was a great pitch. You just show up and throw it. It’s not hard throwing the ball, but when you throw out a first pitch, it becomes difficult because everybody is expecting you to get it across the plate.

“I’m saving my ‘heater’ for Friday in qualifications.”

Friday afternoon, he was back in his own element in the No. 2 PPG Chevrolet for Team Penske at World Wide Technology Raceway at Gateway. Once again, he had a fast car, leading the first practice session before qualifications began later Friday afternoon.

He followed that up by winning the eighth pole of his career Friday evening. He qualified the No. 2 PPG Chevrolet to the pole position with a two-lap average of 188.508 miles per hour around the 1.25-mile short oval.

“The pole helps with the championship,” Newgarden said. “Every practice. Every qualifying session. Every race. You just keep marching on until this thing finishes off. Every weekend you come in invigorated that you can put together a winning car and come in and win the race. I think that is why we show up. We are going to try and do that tomorrow night.”

As for Newgarden’s baseball prowess, Thursday night’s first pitch was the second time he has had that honor for a Major League Baseball game. Several years ago, he threw out the first pitch before a Detroit Tigers game at Comerica Park.

“Thanks to the Cardinals for letting us come out and do this, it’s such a beautiful stadium and historic team,” Newgarden said. “It’s great that they allow us to come here and promote our race. This team has a rich history and you feel it when you walk in these gates.

“I was a decent ballplayer, but I haven’t played since I was 15. It’s been a while. Once I got into racing, that took over fully. I still love baseball. The games are better live because you can really experience it. It’s impressive to see what these guys are all about and see the skillset of these players.

“St. Louis has done a great job promoting this race and we all look forward to it every year.”

When Newgarden played baseball in Hendersonville, Tennessee, he played catcher, third base and centerfield. As a kid, he remembers the home run battle between Sammy Sosa of the Chicago Cubs and Mark McGwire of the St. Louis Cardinals. 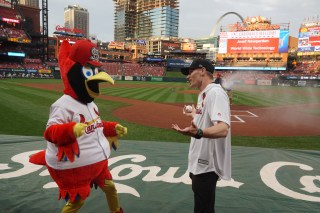 “I have a lot of respect for the Cardinals; they have a great organization,” Newgarden said. “It’s great to be here with the track and promoting IndyCar in St. Louis. The relationship with the Cardinals has been really positive.

“There are a lot of baseball fans that are also racing fans. They can go to the game on Thursday night, then come out and watch us race Friday and Saturday night.”

With his “first pitch” out of the way, Newgarden quickly shifted his focus to Saturday night’s Bommarito Automotive Group 500. He has a 35-point lead over Alexander Rossi with three races remaining.

“It’s a small increase, but it’s still really tight,” Newgarden told NBC Sports.com. “Unless you have a 100-point lead going into Laguna Seca, it’s going to be tight. We have a long way to go. We had a good car here and won in 2017 and last year, we didn’t have our best weekend.

“We’ve gone over this car very well and expect to have a good weekend this year.”

Team Penske has won both races since IndyCar’s return to the 1.25-mile, egg-shaped oval in 2017. Newgarden won in 2017 and teammate Will Power drove to victory in 2018.

Although Newgarden doubled his points lead from 16 points to 35 last Sunday at Pocono because Alexander Rossi was involved in the first-lap pileup in Turn 2, the top four drivers are separated by 52 points. Another Team Penske driver, Simon Pagenaud, is 40 back and five-time NTT IndyCar Series champion Scott Dixon is 52 points out.

“It’s a big battle,” Newgarden said. “The top four, you aren’t looking at one or the other, there are three of them there at our pretty close to me. It’s pretty early to start letting off, now.”

Plus, the season’s final race is at WeatherTech Raceway at Laguna Seca, which hasn’t hosted an IndyCar race since Champ Car in 2004.

“It’s a double-Wild Card. It’s double-points and it’s a track where we haven’t raced at.”

Newgarden believes he can only control his own destiny and that is how he is approaching this weekend and the remaining races on the schedule.