MADISON, Ill. – For the past week, Takuma Sato has been a human punching bag after his involvement in a first lap crash last Sunday at Pocono Raceway. He was widely criticized by the other drivers involved in the crash, including Alexander Rossi and Ryan Hunter-Reay.

Sato and his Rahal Letterman Lanigan Racing team supported their driver and even released on-board video footage shot form Sato’s car that they believe showed the driver did not make an erratic move.

Still, Sato arrived at World Wide Technology Raceway as a driver in serious need of redemption. He found it in Saturday night’s Bommarito Automotive Group 500.

Sato led the final 61 laps of the 248-lap contest at the 1.25-mile short oval and claimed the fifth NTT IndyCar Series victory of his career.

Redemption is sweet for Sato.

“This win for the whole team effort, we can put it all behind,” Sato told NBC Sports.com. “Tonight’s champagne tasted so beautiful, but I have to thank everyone so much for their support.”

At one stage, Sato was a lap down, but the race played out perfectly for the driver from Tokyo to not only get his lap back, but race to the front.

“It’s been an incredible weekend,” Sato said. “Every race weekend is intense with a lot of pressure, but this one was a tough one after Pocono. I got support from a lot of people, actually. They changed their mind after seeing the evidence.

“My team’s support was incredible. I want to thank every single person on the team and all the fans that supported me, and the media, they showed what was a fact. It wasn’t easy, but we focused and built a fast car. We kept our head down and it was a very, very exciting show tonight.”

It was Sato’s first short oval victory of his career and the 42-year-old driver from Japan has now won on every type of track in the NTT IndyCar Series. His first win was on the streets in the Acura Grand Prix of Long Beach in 2013 driving for AJ Foyt Racing. His second win came at the 2.5-mile Indianapolis Motor Speedway in the 101stIndianapolis 500 in 2017 when he was racing for Andretti Autosport.

Sato has collected the entire set.

“It’s a nice collection with a lot of great trophies and memories,” Sato said. “Before tonight, the best finish on a short oval for a driver from Japan was Hidecki Mutoh at Iowa when he finished second (to Dan Wheldon in 2008). We have now completed all types of course, but we have to keep winning of course.

“To get two races in the same season is a fantastic feeling. That was on my target list.” 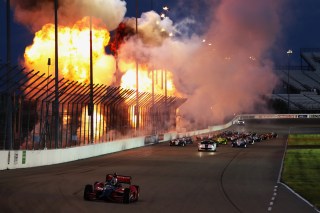 Earlier in the race, the main players in last week’s crash at Pocono were racing side-by-side at Gateway with Sato and Hunter-Reay just inches apart and with Rossi close by.

This time, there was no incident, but it was certainly ironic.

“When Ryan and I went side-by-side we tried to give each other room,” Sato recalled. “Today was very close again. We raced fair, in a hard battle, and I had no problem with that.

“But I had a huge moment at the start when James Hinchcliffe and I touched at the start and I lost a lot of positions on that.”

But Sato was able to battle back.

When Sato went down one lap, he went to the back of the grid at the end of a caution and pitted one more time so that he could stretch his fuel and get the lap back. He was successful in that.

He was able to use the same strategy later in the race when he stretched his fuel again and went from 13 to first. He was also able to save fuel during the final caution that lasted from Laps 192 to 204.

“That, too, was a very important moment,” Sato said.

When the checked flag waved, there was Sato driving under the checkered flag and achieving redemption.

“Everyone thought Takuma was the worst thing on the planet of Earth leaving Pocono. Now it was like it wasn’t his fault. Now he’s probably a hero again. Next week he could be a loser one more time. No one knows.

“You live day by day in this sport. It’s every day you’re judged. A great day for him obviously. All these teams put in a lot of work. I’m sure it’s very gratifying for those guys. Really everyone in front of us did a great job. Santino had a great race. All these guys did a pretty nice job. I’m sure for Sato and his crew, they’re going to be pretty happy about it.

“I wish it was us. It’s hard not to feel happy for everybody because there’s a lot of work that goes into this paddock from all the teams.”