MADISON, Illinois – In the close-knit city of Indianapolis, where professional athletes are often next-door neighbors or work together on charitable causes, sports stars often become friends with stars from other sports.

Such is the case with five-time NTT IndyCar Series champion Scott Dixon and many members of the Indianapolis Colts.

When the stunning news broke that Andrew Luck was retiring as quarterback of the Indianapolis Colts of the National Football League, Saturday night’s Bommarito Automotive Group 500 was already well underway. Such news of the day is a secret for other sports figures as they are in active competition.

Dixon’s race ended early after a punctured radiator on Lap 1 forced his car out of the race after it lost all the water to keep the engine cool. His Chip Ganassi Racing crew would fix the No. 9 PNC Bank Chevrolet and send Dixon back onto the track, but when he gained all the positions he possibly could, the car was parked because there were no more points for Dixon to achieve.

Dixon was walking back to his transporter when he was approached by NBC Sports.com to ask about his race and how it impacted his attempt at a sixth NTT IndyCar Series championship. After that conversation ended, he was told Andrew Luck had retired.

“I’m super bummed for him. He’s a super nice guy and I’ve been lucky enough to spend some time with him at some charity events. I’m actually shocked. I know he was having some issues in the preseason, but it sounded like he would be ready for the regular season.

“I’m super-bummed for him. He’s a great guy. A super nice guy. He’s very intelligent. He’ll have a bright career in whatever he chooses to do. That’s his passion so I really feel for him.” 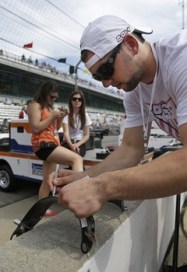 Luck was a very active member of the Indianapolis community and was a big fan of the NTT IndyCar Series. He knows many of the drivers and was often a visitor to the Indianapolis Motor Speedway for Indy 500 practice and on Indianapolis 500 Race Day.

Conor Daly is usually one of the more talkative members of the IndyCar driver community, and a huge Colts fan. He grew up in the Indianapolis suburbs and many of the Colts players are his personal friends.

He thought the news of Luck’s retirement was a bad joke at first.

“No way,” Luck told NBC Sports.com. “Are you serious? Yikes. That’s tough. That’s wild. I’ll have to let that sink in.

“I love Indy, man, I love my hometown. I’ll always support everyone in Indy, for sure.”

Carpenter is a Butler University graduate and a big fan of both the NFL Colts and the NBA’s Indiana Pacers. 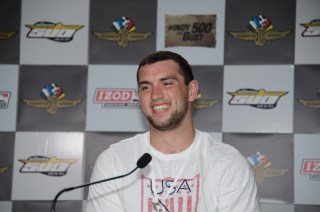 “I can’t believe it,” Carpenter told NBC Sports.com when told about Luck’s retirement. “I’m totally caught off-guard by that. Andrew is a great guy and I’m sure he has his reasons. The timing is a little concerning. I heard it as soon as I got out of the car and that was pretty wild.

“It will be interesting to see how it goes down.”

After Saturday night’s preseason game between the Chicago Bears and the Indianapolis Colts at Lucas Oil Stadium in Indianapolis, some very disappointed Colts fans booed Luck as he walked off the field for the final time.

“I think the fan base has a right to be upset when their franchise quarterback retires a couple weeks before the season, but I have no idea what is going on,” Carpenter said. “I’ve gotten to know Andrew a few times. I’m sure it’s a decision he has thought about.