Alexander Rossi and Scott Dixon are down, but not out, of the battle for the 2019 NTT IndyCar Series championship. But as the series heads to Portland International Raceway for Sunday’s Grand Prix of Portland, their quest has become much more difficult. 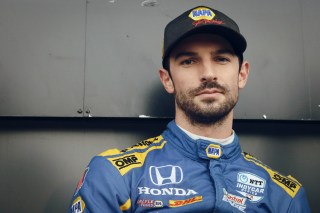 Rossi finished 13that Gateway and went from 35 points down to 46. Scott Dixon was 52 points behind entering the race but a punctured radiator on the first lap doomed his race. He ran the No. 9 PNC Bank Honda until there was no more water left in his cooling system before bringing the car into the garage for repairs.

He returned to the track to pick up two positions after Will Power crashed on Lap 54 and Spencer Pigot on Lap 133.

Once Dixon completed 136 laps, he could not gain any other positions because of the number of laps left in the race at that time and parked the car. He finished 112 laps behind race winner Takuma Sato.

Dixon is 70 points out and realizes his chance at a title is virtually over, although he remains mathematically alive.

“It’s been a while since we’ve had something silly and small happen like that,” Dixon told NBC Sports.com as he walked from his pit area Saturday night. “It looked like something hit the radiator and cracked it. It looked like it happened on Lap 1 at the start. It’s pretty frustrating.

“It seemed like our car was consistent, though. We started to catch Simon Pagenaud. But the team didn’t tell me until about 60 laps in before they told me about the radiator.

“This could be pretty bad, but what can you do? You can’t do anything about it. We’ve had a pretty good run of recent, but it may have just ended.”

The punctured radiator ended a spectacular streak for Dixon, who beginning with Toronto on July 14 through Pocono on August 18 had four-straight races where he finished second or better. He won the July 28 Honda Indy 200 at Mid-Ohio.

“I feel bad for the whole team,” Dixon said. “All we can do is go for wins, here. We’ve been saying that all along. We’ll put our head down. Had we been able to show the potential of our car, we might have been able to go for a win tonight.”

As for Rossi, his 13th-place finish came when the team had to switch from a fuel conservation strategy, to making a pit stop that would ensure they would make it to the finish in the final portion of the race dropped Rossi from contender to out of the top 10.

“We had a car and drove it up to P3 on pace and that is just the way it works,” Rossi said on pit lane after the race. “It’s the way the yellows fall sometimes. The whole 27 NAPA Andretti Honda team put a fast car together and we were able to get from 11thto third and could run the same pace at Josef, if not Josef.

“It’s unfortunate. The series is difficult. We have two more races to go and we’ll try to get them in Portland.”

In the moments leading up to the start of Saturday night’s race, Rossi’s team discovered something was amiss with his No. 27 Honda. A pre-race data check determined the gear stack had an issue.

“If we had gone into the race like that, it wouldn’t have been good, for sure,” Andretti Autosport CEO Rob Edwards said. “But our guys know what they are doing.”

The team hurriedly went to work while the car was on the grid. The gear stack was removed and replaced in just seven minutes.

It all added up to the high drama of the NTT IndyCar Series points race coming down to a dramatic conclusion.

Both drivers admit to being down; but not out.

“This three-week stretch hasn’t started how we would have hoped, but we now have nothing holding us back to collect all the points we can,” Rossi said. “Our mindset has changed a bit from being conservative on our strategy to putting it all out there. We have to get another win in order to head into the season finale with a fighting chance for the Astor Cup. We were very strong last year at Portland and could have potentially won, but an untimely yellow caught us out. We tested the track earlier this month and were fast and able to get some good data under us, so we’re staying optimistic and hoping to come out of Portland with a tighter battle for the NAPA team.”

Although a sixth NTT IndyCar Series championship likely won’t happen for Dixon, he is excited about the prospects for the series after last year’s successful return to Portland International Raceway.

“Overall, I think INDYCAR had a big return last year to the Portland market,” Dixon said. “The race was unpredictable and definitely one to remember in our championship race last year with the PNC Bank team. I love the layout and the fans have shown that they will come out in big numbers. If you looked at the paddock last year it was totally packed.

“I hope we can build on that momentum to continue to race there for many years to come.”