PORTLAND, Oregon – It was “Turn Back the Clock Night” last Saturday at World Wide Technology Speedway at Gateway and the podium celebration should have been sponsored by Geritol, or at the very least, “Just for Men” hair coloring.

The winner, Takuma Sato, is 42 years. Second place was a relative youngster, 38-year-old Ed Carpenter who looks closer to 48. And rounding out the podium is the oldest active full-time driver in the NTT IndyCar Series, 44-year-old Tony Kanaan.

As the series heads to Portland for Sunday’s Grand Prix of Portland, the NTT IndyCar Series has been a showcase of youthful aggression most of the season with 27-year-old Alexander Rossi battling 28-year-old Josef Newgarden for the championship. Added to the “Fountain of Youth” is the youngest race winner in IndyCar Series history, 19-year-old Colton Herta who won at Circuit of the Americas (COTA) when he was still 18, and 21-year-old Santino Ferrucci.

Last weekend, however, proved there is race-winning experience in the older group of NTT IndyCar Series drivers.

These drivers, however, prefer to be called “experienced” rather than “old.” 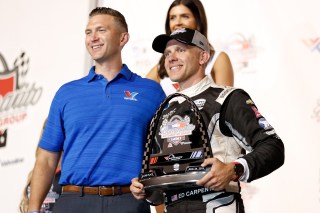 “Working with Spencer (Pigot) and Ed (Jones), these children that were starting racing when I was already in Indy cars, it keeps me young, even though I’m going gray, losing my hair and everything else. It keeps me young. I love racing with these guys. Josef and I are still very close and good friends from our time together.

“It’s just fun to be in the mix with them again.”

Carpenter is an owner/driver in the series, specializing on oval racing. Because last week’s Bommarito Automotive Group 500 was the last oval race of the season, his time behind the wheel is over for 2019. He oversees his two-driver lineup of Spencer Pigot and Ed Jones at Portland International Raceway and WeatherTech Raceway at Laguna Seca for the remainder of the 2019 season.

Kanaan, however, returns to the cockpit of the No. 14 ABC Supply Chevrolet for AJ Foyt Racing hoping to turnaround a very dismal season.

His third-place finish was Kanaan’s first podium since Texas Motor Speedway on June 10, 2017.

“That’s a long time,” Kanaan admitted. “I told the boys on the cool-down lap; I probably don’t remember where I had to stop my car (for the podium).

“We’ve been overcoming a lot of adversities throughout the year. We’ve been hearing a lot of things, good things and bad things, some support, some people thinking we shouldn’t be doing this. 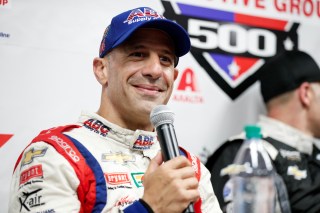 “The boys did a great job. Now it proves it’s making us stronger, definitely. A result like this, it’s a huge boost for everybody. I’m so happy.”

Kanaan is now 15thin the NTT IndyCar Series standings but proved last week he still has the aggressiveness that once made him one of the most feared drivers in the paddock earlier in his career.

“Slowly we are turning it around,” Kanaan said. “We brought Don Halliday back (as engineer), which is a guy my first year here in America in 1996. He was engineering myself at Tasman. He came in to do some damage control. It’s been great.

“Yes, it was a good result. Obviously let’s not get ahead of the game. We still have two races to go, still have a lot of work to do. I’ll take it, enjoy it tonight and go back to work tomorrow.”

By driving to victory last Saturday night, it was Sato’s second win of the season, the first time in his career that the driver from Japan has won more than one time in a season. He is also the defending winner at Portland International Raceway and could conceivably keep his streak going into Sunday’s race. 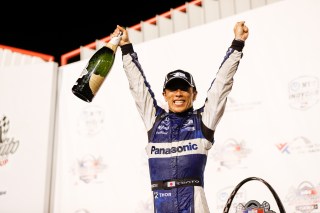 “If you take the three of us added I think is 150 years old for sure,” Sato said of the aging podium. “I think that’s the beauty of this sport, with motor racing. If you’re talking only in physical terms, might not be able to do that. With the combination of experience and the team behind it, the race craft, all the things, I think age is sometimes something, but it is not everything.

“I think we can still perform like this. Today was a great day for three of us. Three of us is very happy.”

Happiness with a result, however, doesn’t last long in the NTT IndyCar Series. Friday morning, these three drivers will be back on track, practicing for Saturday’s qualifications and Sunday’s race.

But for a rare moment last Saturday night, three of the oldest drivers in the series told the younger drivers to, “Step aside, we’re coming through.”