Not so fast, said Newgarden, the 2017 IndyCar champion who won the title in his first season with Team Penske that year.

“I don’t think we can feel too confident or secure where we’re at,” Newgarden said. “I really don’t. I think we’re in a good spot, without a doubt. It would be silly to not recognize it’s a good position.

“We’ve not had a smooth last three races. We’ve got to clean that up now for the final two. I think we’re in a good position, but we can’t do anything different than what we’ve been doing all year. We have to keep sort of attacking with some caution I think.”

The top two drivers in the standings are teammates at Team Penske. Both Newgarden ad Pagenaud should be familiar with each other’s equipment because their cars, along with fifth-place Will Power’s, are all prepared at Team Penske in Mooresville, North Carolina.

“I don’t know if it helps or hurts,” Newgarden said of battling Pagenaud for the title. “I know what he’s doing all the time, and vice versa. We’re a unit that works together, him, Power and myself. Yeah, it’s a dynamic I know very well. I got to think that’s going to be a positive.

“They’re all going to be tough. Simon is always difficult. He’s a very strong driver. When you look at the whole picture, Rossi is still a fantastic driver that’s tough to beat. Same thing with Dixon. I don’t think it’s anywhere from over.

“Portland could flip this thing on its lid with a hundred points at Laguna. It’s going to be down to the wire. Here not anywhere from a blowout here. Just got to keep your finger on the pulse.” 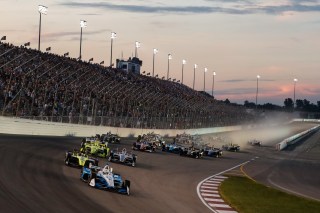 Pagenaud is 38 points behind Newgarden, Rossi is 46 and Dixon is 70 entering this weekend’s round at Portland International Raceway.

Newgarden believes he was extremely lucky last week when he was involved in a last-lap incident with rookie driver Santino Ferrucci, who got into the marbles in Turn 3 and dove low into the turn in Turn 4, spinning out Newgarden.

Luckily for Newgarden, all of the cars that drove by him after that incident were not on the same lap and not battling him for position.

“I had no idea about the other cars. I was trying to stay out of people’s ways, which is what you need to do, keep my car straight and consistent, just get across the line.

“I felt fortunate the engine was still fired. Didn’t turn into a bigger disaster. I still don’t know how it didn’t. But fortunately, it didn’t.”

Newgarden had words with Ferrucci after the race and spoke his mind in a post-race interview with NBC Sports.

“Rarely do I ever try and put someone in their place when I think they need to be put in their place,” Newgarden aid. “I think Santino needed to learn a lesson.

“This is no disrespect to fans or anyone. Most people will not understand what he did wrong in that final corner. They’ve never driven an IndyCar. They don’t know the subtleties of it. I think what he did was very risky. He needs to learn from that. I told him that. It’s really a racer’s thing.

“Hopefully he gets that. I think when you go to bigger ovals, it’s even a bigger potential problem. Like I said, I gave an assessment on NBC. That’s how I felt about it.” 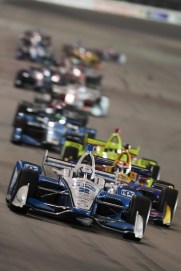 Next up for Newgarden in his bid to win a second NTT IndyCar Series championship in the last three seasons is the demanding Portland International Raceway, a 12-turn, 1.964-mile road course in Portland, Oregon. The race distance is 105 laps / 206.22 miles.

“We were able to maintain the points lead in Gateway, and that was a huge deal for us,” said the 28-year-old Newgarden. “Now that Simon (Pagenaud) has moved into the second spot in championship points, we’re going to work hard as a team to really continue to battle for the championship. That’s great for Team Penske to have two drivers battling it out for the title.

“Now we focus on Portland. It’s a technical road course, so we’re really going to have to make sure we hit all of our marks to make sure we don’t lose any ground. It’s going to be a tough race for the whole field, especially for the championship contenders. I’m excited for the challenge along with the rest of my team, and we can’t wait to get on track there with the Hitachi Chevy.”