PORTLAND, Ore. – Team owner Michael Andretti is confident he will complete his plans for a five-car NTT IndyCar Series team for 2020 before the season finale at WeatherTech Raceway at Laguna Seca on September 22.

The fifth entry will likely include Colton Herta moving over to the big team, while continuing its relationship with team co-owner George Michael Steinbrenner, IV. This year, the 19-year-old Herta and 22-year-old Steinbrenner are members of Harding Steinbrenner Racing with Andretti Technologies proving engineering support.

By moving Herta over to Andretti Autosport, it will stabilize the shaky financial situation Harding Steinbrenner has had to deal with this season. Because of a late start with sponsorship, including one potential sponsor that didn’t come through, team owner Mike Harding has had some financial issues to contend with in 2019.

“If we can pull it off, the plan is to bring Colton over to our team,” Andretti told NBC sports.com Friday morning at Portland International Raceway. “We want to stay with the Steinbrenners no matter what we do.

“I hope to have all of this completed by Laguna Seca.”

Herta has been a major contender in nearly every race this season. He became IndyCar’s youngest ever winner when he won the March 24 INDYCAR Classic at Circuit of the Americas (COTA), just 10 days short of his 19thbirthday.

“When you jell so well with a team like this, it makes it fun to go racing,” Herta said. 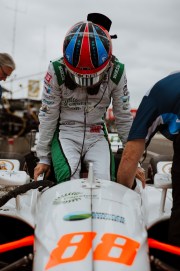 Herta enters Sunday’s Grand Prix of Portland 14thin the standings but has run near the front in nearly every race this season. He led 10 laps in last Saturday night’s Bommarito Automotive Group 500 at World Wide Technology Raceway at Gateway.

“We’re getting close and hopefully in the next couple of weeks, we’ll be able to announce it,” Andretti said. “We are working on five cars; it’s not definite yet.

“It’s a ‘possibility’ we will also work a satellite team. That’s a possibility.”

Andretti also admitted to NBC Sports.com, that a satellite alignment with Meyer Shank Racing is another “possibility” and one where the two sides have discussed it.

“I rate Ericsson,” Andretti admitted. “I think he is actually not bad. In Formula One, he was with a bad team. He might race in Formula One this weekend (for Alfa Romeo at Spa in Belgium) and that would be interesting to see how he would do.

“I would like to still see him in the series.”

Moving up from a four-car full-time team to five cars, Andretti said, “We’ve got that handled.

“Again, people think I’m spreading myself too thin. I’m adding more infrastructure, that allows us to do more and that makes us stronger,” he continued. “If we can’t do it that way, we won’t do it.”

At the start of the 2015 season, Andretti Autosport was struggling with two full-time teams, a third car that was teetering on the edge and a fourth car that ran a very limited schedule with the late Justin Wilson as the driver.

“It was tough times, we made it through it, and it made us stronger,” Andretti said. “A couple of our sponsors didn’t pay from the year before and I was in deep stuff. A lot of that has to do with the infrastructure we’ve put in along with a great bunch of people.”

Young Steinbrenner, whose father Hank is Vice-Chairman of the New York Yankees of Major League Baseball, admitted to NBC Sports.com that it is “very likely” he will join forces with Andretti Autosport next season.

“Everything is falling into place, but sometimes a block will fall over and things get complicated,” Steinbrenner told NBC Sports.com. “Hopefully, we can get something announced by the end of the season. There is talk of being the fifth car on the big team (Andretti Autosport).

“If it were to be a fifth Andretti car, the pieces are already in place with this team.”

When asked if Mike Harding would remain part of it, Steinbrenner said, “Talk of that is ongoing.

“Personally, I’ve always felt comfortable with the relationships I’ve had to make in the last three years. Remaining with Honda is one of the priorities. It’s a business, but it’s a serious goal of mine to stay with Honda.”