PORTLAND, Oregon – NTT IndyCar Series team owner Bobby Rahal told NBC Sports.com that he has to have plans for a three-car team finalized by the season’s final race at Laguna Seca on September 22 in order to hire the “right people” to work on an additional car.

Rahal’s intent is to increase Rahal Letterman Lanigan Racing to a three-car effort beginning in 2020. For the past two seasons, it’s been a two-car operation featuring drivers Takuma Sato and Graham Rahal, the team owner’s son.

“I would say by mid-September we will know,” Rahal told NBC Sports.com. “We’re not there, yet. To me, the most important thing is the money. Without the money, you can’t hire who you want.

“It’s not just the driver, it’s the mechanics and everybody. We have to hire the right people. The people part is the most difficult part.

The last time Rahal’s team was a full three-car effort for an entire season was in 2006. That is when Buddy Rice, Danica Patrick and Jeff Simmons participated in all but the opening race of that season.

The team parked its cars prior to the season-opening race that year after Rahal driver Paul Dana was killed in the Sunday morning warmup session at Homestead-Miami Speedway. Rice and Patrick did not start out of respect to their fallen teammate. Simmons would take over Dana’s ride on the team.

Rahal has been getting phone calls from numerous drivers and mechanics interested in the potential expansion to three cars. Fellow team owner Mike Shank, who fields a 10-car program for driver Jack Harvey. That team hopes to partner with another full-time Honda team, is also under consideration with Rahal.

“It’s still early for a lot of people,” Rahal said. “We have a good relationship with Mike Shank. Hopefully, we can put something together. We could do a lot of great things. We’ll have to wait and see.”

There is also the possibility that current Arrow Schmidt Peterson Motorsports driver James Hinchcliffe may become available with one year left on his contract. That team is merging with McLaren next season to become Arrow McLaren Racing SP and will be a Chevrolet team in 2020.

Hinchcliffe has deep connections with Honda and there are discussions about freeing him up for 2020.

“I like James,” Rahal said. “I think he is a pretty damn, good driver. But nobody has told me anything. As far as I know, he is under contract to McLaren for next year.

“Knowing how embedded James is with Honda, that has to be uncomfortable with a lot of people at McLaren.”

As one of the three ownership partners at Rahal Letterman Lanigan Racing, Rahal has been able to slowly grow the operation while finding additional funding to help it expand.

“In the end, we have to be the best two-car team before we worry about being a three-car team,” Rahal emphasized. 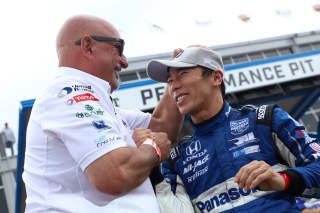 Rahal also called Takuma Sato’s victory in last Saturday night’s Bommarito Automotive Group 500 at World Wide Technology Raceway at Gateway one of the most satisfying wins of his career. That’s because it came after a week where the driver from Japan was heavily criticized and blamed for his role in a crash at the start of the ABC Supply 500 at Pocono Raceway.

“Last weekend, like any win, was satisfying,” Rahal told NBC Sports.com. “Having said that, it was extra satisfying because of the public hanging of Takuma Sato.”

Rahal met with Sato in Colorado a few days before heading to St. Louis. The team issued a statement in support of their driver.

“I told him, ‘Don’t worry about what everybody is saying; go out and prove them wrong,’” Rahal said. “And, he did.”

Rahal was with team co-owner Michael Lanigan, who wasn’t feeling well at the time and was at a private airport near World Wide Technology Raceway at Gateway waiting to fly home early. They saw Sato’s victory on television on NBCSN.

“It was a huge weekend for us,” Rahal said. “It was bigger for Takuma than anybody. You couldn’t have written a script any better than that one.

“It was a lynching. He was convicted in the court of public opinion without all of the facts. I just thought that was wrong. I thought we had to stand up for him because he didn’t do anything wrong.”

The victory was classic Sato as the strategy worked and once he was in front, Sato kept the car there.

“He did a great job keeping it up front because the tires were bad, vibrating badly, and he kept it on the track,” Sato said. “For a guy who supposedly crashes all the time, he didn’t crash.”

Rahal believes in most crashes “It takes two to Tango.

“I have no problem with Takuma Sato because it’s easier to detune a guy, than tune him up,” Rahal said.