PORTLAND, Oregon – Josef Newgarden hasn’t finished on the podium of an NTT IndyCar Series race since he won in the early hours of July 21 in the Iowa 300 at Iowa Speedway.

At that time the 2017 IndyCar Series champion had a 29-point lead over Alexander Rossi.

Since that race, Newgarden has finished 14that Mid-Ohio, fifth at Pocono, seventh and World Wide Technology Raceway at Gateway and fifth in Sunday’s Grand Prix of Portland.

His lead in the NTT IndyCar Series standings has increased to 41 points over Rossi, 42 over Simon Pagenaud and 85 over five-time IndyCar Series champion Scott Dixon.

There remains just one race to go, the double-points paying championship finale at WeatherTech Raceway at Laguna Seca on September 22. If Newgarden is able to maintain his championship lead in that race, he will win his second NTT IndyCar Series title.

What made Newgarden’s race in Portland so important is he started 13th, narrowly missed a major melee in the first lap crash at the start of the contest and race his way back to the top-five. The only driver that may have had a more impressive comeback was Team Penske teammate and 2016 IndyCar champion Simon Pagenaud, who started 18thand finished seventh. He was involved in that first lap crash in Turn 1 that left his car facing the wrong way on the track after he was tagged in the rear by Max Chilton’s Chevrolet. 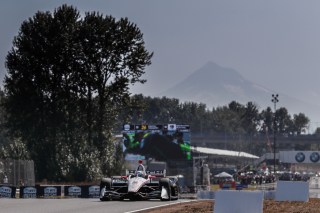 “I would have liked more points, but at the end of the day, it’s not a bad result for us,” Newgarden said. “I made our bed for us yesterday in qualifying. You start 13th you kind of put yourself in a hole already, and we just tried to climb out of it today as best as possible, and I don’t think we can be mad about where we climbed to. It was pretty decent.

“What could have happened if we started up front more? Maybe we could have done more damage and won the race or finished second or third and would have been a little better off. But I think, for the most part, fifth is pretty pleasing on the day.”

Especially, the way that day started in Turn 1 when James Hinchcliffe, Conor Daly, Graham Rahal and Zach Veach were all involved in the Turn 1 crash. Newgarden was able to get by but Pagenaud spun trying to avoid the carnages.

“We just missed all that chaos,” Newgarden said. “It happened right in front of me in Turn 1, so I was in the mess. But fortunately, we didn’t touch anything, it was just right in front of us. I stopped and then went around it, and we got going again.

“I had nowhere to go because it was right in front of me, and the decision-making process, I couldn’t really go right because Rahal was coming right at that moment, and then once they hit, they were kind of flowing to the left, and then I was just kind of stuck right in the middle. So, I just waited for it all to stop and then went around it. I was kind of lucky in a way.

“I was just thankful that no one plowed into me. That’s what you’re waiting for is someone to hit you or just something bad to happen, and it almost did, but we just, fortunately, avoided it. I really wasn’t worried about where we came out just because it was Lap 1, and it was like, that doesn’t matter. As long as we can get through the start, then we can get going. So, I was happier about that, that we got through it with a car that was still in one piece.

“A relatively good day, for the most part. We just need to have a better weekend in Laguna. Obviously, it’s still going to be quite tough with the double points. If it wasn’t double points, I think it would be a lot easier, but double points is going to make it difficult.”

Newgarden flat-spotted his right front tire and it was a real handful at the lows speed the cars had to run during the very long caution to clean up the mess in Turn 1.

Because the yellow flag was out until Lap 11, Newgarden’s Team Penske crew changed their race strategy, opting to make just two pit stops instead of three. In fact, the first five drivers all made two stops with Spencer Pigot in sixth place the first driver to make three stops.

“The more the laps ticked off, the more you go, ‘Well, this is a no-brainer two-stop(race).’ Why would you do a three-stop? A three-stop is going to be more of a gamble at that point than a two-stop. The guys who didn’t want to gamble, it was a pretty easy decision to go to two.”

Last year, Scott Dixon was involved in a first-lap crash in Turn 2 but was able to keep his engine fired and drive away from the damage. He went on to finish fifth and in the next race, clinched his fifth NTT IndyCar Series championship.

The same thing could happen to Newgarden, the 2017 NTT IndyCar Series champion, this year.

But don’t tell him that – he’s too busy calculating the points in his head.

“No, it’s honestly not enough with double points. It’s just not. I don’t think we’re very comfortable. Maybe we’ve got Scott’s mojo from last — it was like Scott could do no wrong last year. Nothing ever bad happened to him, and this year he’s had a couple of small things hit him here right at the end, the radiator and now the battery deal. I don’t know what it was, but it sounded like that’s what it was. It’s like he’s got the complete opposite of what he had last year.

“That’s IndyCar. Sometimes this cycles around. You’ll get the good years; you’ll get the bad. Hopefully, we continue to have a good year in Laguna and then kind of finish it off because you never know when you’re going to have a bad year again. It’s far from over, but I for sure would rather be in the position we are in instead of second or third.”