Miles, who spoke with NBC Sports.com after the 2020 schedule was released on NBC Sports before Sunday’s telecast of the Grand Prix of Portland, said INDYCAR was willing to have an 18-race schedule for next season. Miles, along with INDYCAR Vice President of Promoter and Media Partner Relations Stephen Starks worked with Pocono Raceway officials through late last week to try to find a way to keep the series at the 2.5-mile triangle-shaped speedway.

“It was absolutely not a foregone conclusion,” Miles told NBC Sports.com. “We were talking to them about substantive points as late as Thursday of last week. It was only on Thursday night that it was clear it was not going to get done.

“We appreciated the point of view that maybe there would be a new opportunity there because of NASCAR schedule changes for next year, but we still could not get it to work.”

Miles said there were a variety of factors that led to the decision to not return. And, he emphasized that the two groups could get together in the future, sooner, rather than later.

“We and they worked hard on it this week and only threw in the towel Thursday night,” Miles continued. “People say, ‘Well, you’ll never go back.’ Well, here we are in Portland and think Road America, Gateway and now Richmond, I think we have a track record of going back to places we have raced at before.

“We were working with Pocono and we were already committed to Richmond. That would have added a net race and be at 18 for next year, so we are willing to have an 18-race schedule under the right circumstances.” 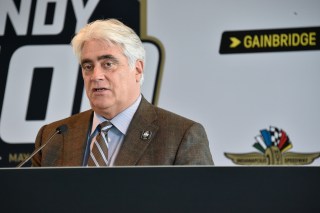 Miles said the decision to increase to 18 races would be an economic decision with the teams in mind. Currently, teams have been able to generate enough sponsorship to the budget to have a healthy lineup for 17 race schedules.

“You have to look at the expenses and sets of tires is one and then the number of miles on engines,” Miles explained. “Engine leases limit the number of miles on engines. If you could add a race without having to go to another engine, then that would lessen the cost. But if one more race meant one more engine, that would be considerably more. It’s a variable analysis.

“We thought we might be able to go to 18 races without having to go to an additional engine. We looked at testing and other uses.”

“It is with great disappointment for Pocono Raceway to confirm we will not be on the 2020 NTT IndyCar Series schedule,” Igdalsky said. “Our partnership with the premier open wheel series in the United States has concluded for now. It has been a pleasure to work with INDYCAR representatives during this honest and candid negotiation.

“On behalf of the entire Pocono Raceway family, it has been a joy getting to know the teams and partners, many of whom have become dear friends. Thank you to ABC Supply Co., Inc., who have supported our INDYCAR events since 2014. Thank you to all the fans that have supported Pocono over the years. We share in the disappointment of thousands who also dreamed of future open wheel races at ‘The Tricky Triangle.’ A sincere thank you to Mario Andretti, for his years of passionate support.

“And finally, we thank all the drivers who dazzled us with their talent and heroics, as well as those drivers who spoke in support of Pocono during their recent visit. We sincerely wish INDYCAR and their competitors best of luck with the remainder of the 2019 season and beyond.”

Next year’s schedule also has significant changes because of the Tokyo Olympics, which will be televised on NBC and its cable channels. IndyCar will have a three-week break next summer.

Also, the INDYCAR Classic at Circuit of the Americas (COTA) was moved from the third weekend in March to the final weekend of April so that it did not conflict with the annual 12 Hours of Sebring IMSA Sports Car race.

Every year when INDYCAR announces a new schedule, there remains fan support for some tracks that haven’t hosted IndyCar events in years, or even for more than a decade.

“The decision making on the schedule is complicated with lots of considerations,” Miles said. “The first now is we are not in a position to look to add to the total number of races unless it makes sense for us to do that. Economics is part of that, timing is part of it, proximity to other races in the same time of year and whether it would be a good event and bring in a good crowd.

“We try to stay current with the other venues so if there is reason to re-evaluate, we will do it. It’s not as simple as having a track and we will go there, it’s more complicated than that.”

Some fans long for the days of the old “Triple Crown.” That was three 500-mile races that included the Indianapolis 500 and, in the past, 500-milers at Pocono and at the old Ontario Motor Speedway in California, which closed up in the 1980s and is now commercial development. In more recent years, such tracks as Michigan Speedway and Auto Club Speedway in Fontana, California were part of the “Triple Crown.”

“I didn’t think that it added a huge amount of interest,” Miles said. “The promotion of the ‘Triple Crown’ didn’t cut through.

“Right now, our fans are focused on who is going to win the championship and that is a more important consideration than any three races. Your ability to promote multiple messages is limited. I don’t see that happening any time soon because when we did do it, it didn’t move the needle on interest.”

Miles believes INDYCAR’s television partner at NBC has helped “move the needle” and that is why it was so important to announce the schedule on live television during Sunday’s race on the NBC.

“It was great that it was on network and NBC was open to it and enthusiastic about it,” Miles said. “NBC has done a great job for us all year and this is the most recent example. To do it in a way that Scott Dixon was able to talk about his experiences at Richmond and give the high points of the schedule was a great way to get it done.”