INDYCAR officially released its 2020 schedule Sunday on NBC Sports and announced the return of the NTT IndyCar Series to Richmond Raceway for the first time since 2009.

The NTT IndyCar Series will return to the .750-mile short oval on June 27, 2020 for a Saturday night race. It will feature a night-time practice on Friday followed by qualifications on Saturday and the race later that night.

“It’s great to have INDYCAR come back after a 10-year absence,” Bickmeier said. “If you watched the life stream today, you could see the energy here in the community. Just a great turnout today to welcome INDYCAR back to Richmond Raceway. Just excited to do that.

“It’s been a real burst of energy for all of us here at the raceway. You can see that in our ticket office as well. That’s been a lot of fun for our team up there.

“Overall just the opportunity to have these guys back, diversifying the racing here that we have to offer. Part of that connects to a major renovation that we did last year in our infield. $30 million renovation to the infield, something new and exciting for the fans to experience when they come back here.

“Part of that was to get more racing on the racetrack so more people could come and enjoy that experience. These guys, INDYCAR, is a big piece of that puzzle.

“We got a lot going on here at Richmond Raceway. We’re a multi-purpose facility. But to have a variety of forms of racing, certainly to have INDYCAR back, we’re just really happy about that.” 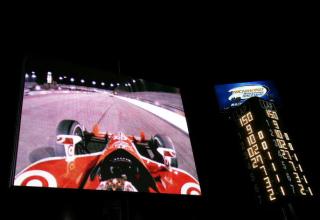 INDYCAR CEO Mark Miles said it’s important for the series to compete in the Mid-Atlantic Region of the United States. Richmond is very close to major cities Washington, D.C., Baltimore and Philadelphia.

INDYCAR President Jay Frye was asked by NBC Sports.com if the current package of aerodynamics and engine formula will produce a race similar to Iowa Speedway, or will it closer resemble the racing seen two weeks ago at World Wide Technology Raceway at Gateway?

“We certainly would expect it to be more like Iowa,” Frye said. “That’s one of the things we talked about a lot today, the difference between 10 years ago and today, the direction we’ve went.

“With this current car, less downforce, more horsepower coming, look at Iowa the last few years in ’17, we still had the manufacturer kits that had the high downforce. We had about 300 on-track passes for that event. In ’18 we had almost a thousand with the current car, current configuration.

“We feel good about the direction. We’re going to come back in October and have a test with Firestone with a couple cars, then March with the full field. We’re going to make sure we give fans a good show. I think we’re going the right way.”

Both drivers in attendance are veterans at racing at Richmond from when the old Indy Racing League competed there from 2001 to 2009. The cars were much different back then, and that created a single-file race where it was difficult to pass.

Kanaan, the 2008 Richmond winner, and Dixon, who won two times at Richmond, believe the newer cars with less aero and more horsepower will feature a much more competitive race.

“The last time we were here, we didn’t deliver what the fans wanted,” Kanaan responded to NBC Sports.com. “Since Jay and Mark came onboard, they’ve been working extremely hard with Firestone and Dallara to get the right package. I believe we found that. If you guys watched the last two years in Iowa, how the race has been. This track is extremely similar.

“I’m not expecting anything less than 800 passes here when we come back. Hopefully I’ll pass Scott for the lead on the last lap and I’ll win.”

Dixon won the last race at Richmond in 2009.

“We’re going for back-to-back wins separated by 11 years,” Dixon quipped. “I think the ultimate goal is Iowa. We’ll have to see how that progresses. I think there will be a lot of effort that goes in from the tire test in October through to March. Try and create as much margin in that as possible.

“But it could take a little while. We’ll just have to wait and see. The goal is to have a very similar race at Iowa.”

Kanaan believes that less aerodynamic downforce, combined with a different tire compound from Firestone, will make all of the difference in improving the style of racing at the Richmond short oval.

“I think we came here the last year we had too much downforce,” Kanaan recalled. “Everybody was running the same lap time. Once you got a back-marker, you couldn’t do anything about it. That was a combination of a lot of things probably. I don’t think I can point out one thing that made the race like that.

“I remember back here, we came back, we were going flat out, like full throttle around this little place. Then you go to a race, you’re only a tenth-, or tenth-and-a-half from each other, you can’t pass.

“I think we need the tires to go off, you need less downforce, you need the cars to slide, then you’re going to see some passing. I even think the side-by-side, I’m not sure, I don’t think we had a lot of side-by-side this year, people want to see passing as well. I think the passing is the most important thing.

“The year we were here last time, it was just too much downforce.

“We ran around the track, it’s extremely smooth. That is actually quite remarkable. If you go to Iowa, it’s completely the opposite, extremely bumpy. I think it will be easier to run side-by-side here just because the bumps obviously make the grip go away.”

Dixon said on Sunday’s NBC broadcast that he remembers the days when Sam Hornish, Jr. was able to run high all day at Richmond and devour the field. The best way to prevent that is to create two racing grooves.

“I think that’s the ultimate goal,” Dixon said Tuesday. “I think a lot of that is the tire. Even Iowa, my race, and many others, too, this year, you’re searching a lot of the time. You find something that works. By the next stint it changes. It’s because the tire is pretty highly stressed and you’re constantly having to maneuver for the change.

“I think Turns 3 and 4 will be a lot easier to run side-by-side. It definitely tightens up a little bit out of two, the banking pulls off. I think that will create opportunities to dive underneath somebody.

“Tony kind of touched on it. I think tire deg is really a big thing for great racing. We see that on road, street and ovals.”

For Bickmeier, this is a major accomplishment to successfully bring IndyCar racing back to a venue that was able to attract fans during its first tenure from 2001-2009. He expects it to be an even bigger success in the second go-round with INDYCAR.

“I think you saw it today,” Bickmeier said. “The turnout of community and business leaders and elected officials who were out here today, just the overall excitement for this announcement.

“I think we’re motorsports country, we’re racing fans here. I think to be the Mid-Atlantic home for INDYCAR is a big deal for us. There are great fan bases in big cities that you can get here really quickly: D.C., Philly, Baltimore, all these places we’re going to market and tap into that INDYCAR audience that’s there, get them down to Richmond.

“Bringing INDYCAR back was a big piece of the puzzle.

“I tell people all the time we looked at our facility as a puzzle, literally we pulled it apart, putting it back piece by piece. INDYCAR was a big part of putting that puzzle back together.”