MOORESVILLE, North Carolina – When the wraps came off 103rdIndianapolis 500 winner Simon Pagenaud’s “Baby Borg” Trophy that was presented to him at the Team Penske Breakfast on Monday, he was stunned to see two sculpted faces on the base of his trophy.

One of the faces was Pagenaud’s, an identical image that was unveiled on the permanent Borg-Warner Trophy in France on August 6. The second image belongs to his prized pup, Norman, a Jack Russell Terrier that is a constant companion with Pagenaud and his fiancée Hailey McDermott.

The 18thIndianapolis 500 victory for the team will be different, one that will be remembered for Pagenaud’s unbridled enthusiasm and for Norman’s bark after his “father” took a bite out of the Indy 500 field.

“Today, they surprised me with my likeness and Norman’s likeness and that is such a great and incredible gesture from BorgWarner,” Pagenaud told NBC Sports.com. “It’s the first time Will Behrends has sculpted a dog and he did a phenomenal job.

“It’s an incredible gift I will keep forever and remind me of the most incredible day of my life.” 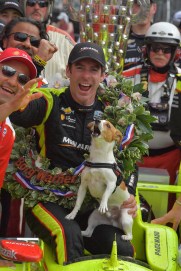 Norman is easily the most famous dog in auto racing and helped celebrate Pagenaud’s Indy 500 win on May 26 in Victory Lane at the Indianapolis Motor Speedway.

“It’s great for Hailey and me to have these kinds of memories because Norman was part of this incredible day in our lives,” Pagenaud said. “It was the most incredible day of our lives and he will be part of our memories forever.

“Indy is special for its traditions and what Borg-Warner did for me today is very, very special.”

“Just flying over the Speedway was special because things have changed,” Pagenaud said. “I can’t walk into a restaurant without being recognized now. I get introduced as the 2019 Indy 500 champion.

Pagenaud said the response he got over the weekend from the NASCAR community was “phenomenal.”

“Joe Gibbs came over and talked to me and I have always looked at Joe Gibbs as a Super Bowl winner and great NASCAR team owner, with much success,” Pagenaud said. “I had a lot of other drivers that I saw. It’s great to feel part of it as a champion.

“Indianapolis is the capital of racing and the center of racing.

Pagenaud, the 2016 NTT IndyCar Series Champion, is third in the standings, 42 points behind Team Penske teammate Josef Newgarden and one point behind Andretti Autosport driver Alexander Rossi heading into the September 22 double-points season-finale at WeatherTech Raceway at Laguna Seca.

Monday was also important for Pagenaud because unlike past years when the Baby Borg Trophies were presented at a dinner before the North American International Auto Show in Detroit in January, he got to share this with the team. 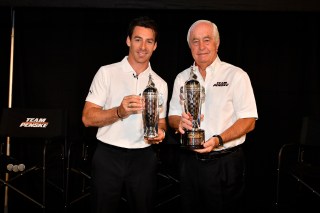 “Getting the Baby Borg trophy today was overwhelming in terms of emotion, especially here at the Team Penske employee breakfast,” Pagenaud said. “Five-hundred-and-fifty Team Penske employees were here, enjoying the moment, with me, was even more special.

“Incredible things have happened for me by taking the ‘Daddy Borg’ to France, being able to share that with my home country and educate IndyCar was incredible.

“I don’t think it’s over; it’s just the beginning. It’s phenomenal to see BorgWarner’s support for the Indianapolis 500 winner is outstanding. They keep giving you gifts and making you feel special.”

Pagenaud has posed with the Borg-Warner Trophy in Victory Lane at the Indianapolis Motor Speedway, the trophy accompanied him to the White House when the team was honored by President Donald Trump on June 10 and most recently went to his native France.

The Borg-Warner Trophy has returned to its permanent home at the Indianapolis Motor Speedway Museum. The Baby Borg, however, is the one Pagenaud gets to keep.

“That’s another amazing gesture of BorgWarner to allow the winner to have a memory of it,” Pagenaud said. “It’s a beautiful piece and with the base it goes well together. It’s going to be dead center in the middle of all of my other trophies.

“It is the most valuable personally and emotionally and for the dream that I have had since I was a little kid to get to this point is my goal. Like I said this morning, I’m living my dream life.

“I’m going to make sure it has the best spot in the house.”