MOORESVILLE, North Carolina – It can be hard for any professional athlete, including race drivers, to admit making a mistake. But in Josef Newgarden’s case, he admits he learned a valuable lesson in his last-lap spinoff in the Honda Indy 200 at Mid-Ohio on July 25.

Newgarden was on his way to a fourth-place finish on the final lap when he saw an opening in the Turn 2 “Keyhole” section of the Mid-Ohio Sports Car Course. He thought he could pass Ryan Hunter-Reay for third place on the final lap and increase his points lead over Alexander Rossi.

Instead, the Team Penske driver misjudged the move, bounced off Hunter-Reay and spun off the race course, stalling his No. 2 Chevrolet IndyCar. Instead of padding his lead in the NTT IndyCar Series standings with a four-place finish, Newgarden lost points with his 14th-place finish.

He has widened the points lead from 16 points over Rossi after Mid-Ohio to 41 points entering the September 22 season-finale at WeatherTech Raceway at Laguna Seca – a race that pays double points.

Prior to his spinout at Mid-Ohio, Newgarden was coming off a fantastic stretch of racing that began with a win at Texas, a third at Elkhart Lake, Wisconsin in June, a fourth place at Toronto and a win at Iowa in July before closing out that month with his mistake at Mid-Ohio.

“Oh, for sure,” Newgarden said Thursday when posed that question by NBC Sports.com “I’ve been known to have my moments in the car. Mid-Ohio was definitely one of them. 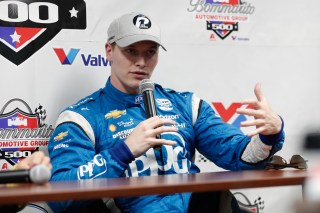 “The problem is I just can’t help myself sometimes. My nature is to always go for a higher position. I’ve had to work on pulling myself back. I think I’ve learned how to do that in a lot of ways over the last couple years. I’ve been able to do that. I feel confident that my approach can be good.

“But you can see how quickly decision making can turn from a potential positive to a really big negative. That’s what it’s like in the top level of racing. It can go from good to bad really quick. I think that’s what makes it entertaining and exciting.

“That’s what makes it thrilling, when you get it right.”

Newgarden hopes to get it right when the season concludes next week at Laguna Seca. There will be a full day of testing on Thursday with practice for the race on Friday, qualifications on Saturday and the race on Sunday, September 22.

That race will be televised by NBC.

Because only four drivers have ever driven an IndyCar at the 2.258-mile, 11-turn road course, it has the potential to create additional drama to this year’s championship.

“Honestly, I don’t even know. I really, really don’t,” Newgarden said. “Because tracks that we’ve said historically you can’t pass well on, we’ve kind of changed that notion in IndyCar. There’s just a lot of places that historically maybe they weren’t good passing place, then they become it.

“I don’t think we have a good idea of how Laguna is going to race yet, what the tire degradation is going to be like, is qualifying going to be the name of the game for the weekend or not. It’s hard to tell.

“I think qualifying is going to be an important part of the weekend, without a doubt. It’s always better to start up front, to get yourself out of harm’s way hopefully, not get yourself into trouble at the very beginning.

A 41-point lead with one race to go may appear safe but throw in the double-points factor and that means it’s really a 20.5-points lead using the regular scoring system. 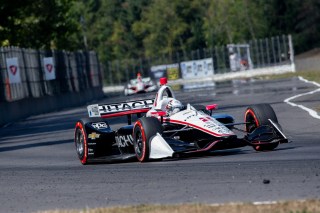 Translation – Newgarden must finish fourth or higher in order to clinch the championship and in today’s NTT IndyCar Series, that can be a difficult challenge.

“I think we’re in the favorable position, for sure,” Newgarden said. “With double points, I’ve tried to make everyone aware all the way along that it’s far from being over, that it’s always going to be a difficult race in Laguna with a double-point situation. That’s where we find ourselves. We’re in the better position. We definitely have a little bit of a comfort, but nothing that you can feel too comfortable about.

“We still have to perform really well. Finishing fourth or higher in an IndyCar race, to guarantee the championship, is not really an easy task. I mean, it’s difficult to run in the top five in the IndyCar Series week in and week out.

“I feel like we have the right people in our corner. We just need to make sure that we go and execute now.”