MONTEREY, California – Graham Rahal admits that he can’t wait until the day he doesn’t have to worry about his weight. Being a 6-foot-2, big-boned individual can have its advantages, but not when it comes to fitting into an IndyCar.

That is why the son of 1986 Indianapolis 500 winner and three-time CART IndyCar champion Bobby Rahal has begun a body shaping therapy known as “SculpSure” that uses lasers to trim away body fat.

“Honestly, it is no secret, I’m not shy about this, that I’ve struggled with my weight,” the 201-pound Rahal told a group of reporters during INDYCAR’s Open Test at Laguna Seca on Thursday. “I can guarantee you that from a strength perspective and a stamina perspective, there’s very few guys out here that can keep up with me. I’m just not a super skinny build. It’s never been my thing.

“I’ve tried. We’ve kind of looked around. There was some mutual interest from them to look into trying this, see if it works. I’ll be honest. I was always very skeptical of the stuff. Where I’m at, I’ve done one treatment. I can’t even tell you today if it’s something that really works or not.”

That led Rahal to try out the sculpting process that was invented by a doctor who found it with swelling in kid’s cheeks. The “SculpSure” process uses a laser that kills the fatty cells.

“It takes a long time, I think,” Rahal said. “It’s going to take multiple I think to get there.”

A race driver needs to be thin, yet very strong to have the physical strength and stamina to compete at a high level in the race car. When it comes to the NTT IndyCar Series, it’s even more important because of the size of the cars and tight cockpit.

Additionally, the extra weight can impact the performance of the race car. The lighter the driver, the less weight inside of the car. In INDYCAR, drivers are weighed and for the lighter drivers, lead weight is added to the car to meet a requirement.

But in Rahal’s case, the lead weight ballast has to be reduced and that sometimes throws off the center of gravity in the car.

“The facts are it’s not going to work if you don’t work out, too, and eat well,” Rahal said. “It doesn’t do anything. But earlier this year, man, I had given up drinking completely for three, four months. I was working out every day, twice a day on most occasions. I went to a nutritionist, doing everything. I literally was not losing an ounce. It was the most frustrating period of time for me.

“I am the biggest guy here. Is it ever going to be equal for me? No matter what these guys talk about with driver ballast, it’s a whole different thing, where my center of gravity is.” 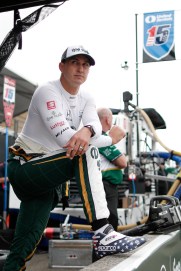 That is what led the 30-year-old driver from Ohio to study the “SculpSure” procedure. He realizes he is never going to have the metabolism of some of the thinner drivers, but he needs to maintain a weight that minimizes his disadvantage.

“It is a challenge,” he admitted. “Ricky Taylor and Helio Castroneves (on Penske Team Acura in IMSA) weigh 60 pounds less than me or something. There is no ballast there. That’s a big swing, a lot of weight to be carrying around.

“We have to try anything we can. If you’re going to be serious, try to find the performance advantage and the edge, you’ve got to look outside of the box.

“It is something new for me. But the fight I guess against being an ultra-skinny guy.

“I fly home with most of these guys after races, I see most of these guys a lot of times, they’re sitting there eating In-N-Out Burger, whatever else. Literally I cannot do it. If I do it, it immediately reflects for me. These guys you see them the next weekend, they’re like this big.

Because of Rahal’s height and size, he chose to step away from the endurance races for Team Penske in IMSA at the end of last season. He was replaced at the Rolex 24 at Daytona and the Mobil 1 12 Hours of Sebring by fellow IndyCar driver Alexander Rossi.

Rahal complained that the steering wheel actually hit his legs inside of the Acura, making it difficult for him to drive on the challenging road courses. Since that time, Acura Team Penske has moved the steering column up by a few inches, and it no longer impacts a driver the size of Rahal.

For the IMSA season-ending Petit Le Mans at Road Atlanta on Oct. 12, Rahal will be back in the Team Penske Acura.

“Back in the (Team Penske) shop three weeks ago, I could actually turn the steering wheel, which I was shocked about,” Rahal said. “My head touched the roof, whatever, I’m used to that. Physically being able to steer, which I now should be able to do better.

“So I’m excited about it. It’s another great opportunity obviously with Penske. But more importantly for me is Acura, Honda. It’s a great thing to be back in.

“But that wasn’t a weight thing. It’s purely size. They just don’t build cars for guys my size. I used to talk to J.W. (Justin Wilson) about that. It’s the facts of life. Even the GT cars. You would think a GT car would be big. I don’t know if I’ve ever been in a GT car, I was comfortable in either. They’re built for small guys. That’s the way it goes.”

Rahal is taller than his father, Bobby, who is also his IndyCar team owner along with David Letterman and Michael Lanigan.

“I told my wife this the other day, I’m very excited for someday when my career ends just to have a ‘Dad Bod,’ be able to let go for a minute, see how things turn out, because this is getting a little bit exhausting.

“We’re going to stay committed through the winter. I try my hardest every year, but I never tried harder this year to be thin. I weigh about the same as last year, but it took so much effort to get there, I just have to think outside the box.”