Since Miles took over as CEO at the end of 2012, INDYCAR started a trend of growth, albeit small in the beginning but increasing in recent years.

Perhaps the greatest spurt began in 2016 surrounding the 100thrunning of the Indianapolis 500. But instead of dropping off, interest in the series continues to grow, according to Miles.

“We believe IndyCar is the most compelling form of motorsport on the planet, and I think that’s more true, more defensible every year,” Miles said during a formal presentation Friday at WeatherTech Raceway at Laguna Seca. “Under Jay’s direction, with the combined expertise and experience of our teams of Dallara, Honda, Chevy and all of our suppliers, we just keep getting better, the racing improves, it’s more competitive, and it’s all done while being very attentive to managing costs for the team.

“I’m also delighted to say that in almost every metric, our marketing and promotional and commercial initiatives are growing the sport and ultimately attracting more fans.”

Miles believes the close competition in the NTT IndyCar Series has seen an increase in teams and spectators. There were 36 entries for this year’s Indianapolis 500, creating Bump Day drama that included McLaren and Fernando Alonso failing to make the 33-car starting lineup.

“Bump Day is back, and I think the fans loved it,” Miles said. “Looking beyond that, we have had seven winners so far, seven full winners, and seven wins for Honda and nine wins for Chevy so far, a great balance in terms of the result between the manufacturers.

“And for the 14th consecutive year, I’m sure most of you have written this, the championship has come down to the finale, and we’re thrilled about that.” 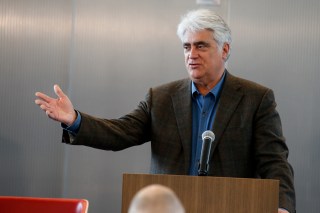 Looking ahead to 2020, Miles is excited about McLaren returning to the series next year after striking a partnership with Arrow Schmidt Peterson Motorsports to create Arrow McLaren Racing SP. Cars next year also will have a wind screen, and testing will begin on a hybrid system that will be implemented when the new engine formula is introduced in 2022.

From the business standpoint, Miles indicated attendance is up as well as TV ratings.

“Attendance, while we don’t have auditable numbers from all of our promoters, I think it’s fair to say that it’s meaningfully up,” Miles said. “We believe at about eight of our races there has been increased attendance from year over year at their tracks. We think four of our races set weekend records for their events, and we think it’s fair to say that more than 1.5 million people in total attended our races this year before this weekend.

“In less than 12 months, we’ve added as new sponsors NTT as our title sponsor of the series, Speedway as official fuel and convenience store, Gainbridge as the presenting sponsor of the Indianapolis 500-mile race, and I’ll take all comers on whether or not we’re able to add another meaningful sponsor for next year and announce that before the end of this year.

Firestone also extended its contract to remain the sole supplier of the NTT IndyCar Series through 2026.

“That’s a really big deal to us, and I know very good news from the perspective of the paddock,” Miles said. “Ninety-seven percent of our sponsorships are in place through 2020, so we’re now really focused on selling for 2021, and I believe we have the kind of story to tell and the momentum which will help us continue to grow.”

Miles also outlined growth in marketing and social media, and INDYCAR increasing its role in eSports.

“We teamed up with Microsoft and Forza for their Bounty Hunter challenge,” Miles said. “A number of our drivers laid down times for May and then gamers tried to see if they could beat them for points and various prizes. There have been 700,000 downloads of the Forza 7 game occurred as part of this initiative, and the Forza team told us that given the link — that it was not a new introduction in terms of a game, it was the biggest number they saw for downloads in their experience in the space so far. That bodes well for us, I think.

“The last few months we’ve done a lot of work to decide what our strategy ought to look like for eSport. We’re not going to get into that today, but you will see us stepping up and getting more into the esports space next year for sure.”

Perhaps the biggest improvement to the State of INDYCAR is the first year where all races are on NBC or NBCSN, creating some additional exposure for the series as well as increasing awareness for the NTT IndyCar Series.

More on that will follow in an additional feature.

While Miles and Frye have worked together on many issues and projects in the series, Frye has also spent much of his focus on the cockpit protection system known as the “Aeroscreen.” It will provide even greatest safety for the drivers’ head incorporating both a halo and plexiglass windscreen that will be open on top, but higher than the top of the driver’s helmet.

“There has been no stone unturned on this program, this project, from driver cooling, driver expectation, clarity, glare, impact,” Frye explained. “It’s amazing what they’ve been able to do in a very short period of time. We believe this is an industry-changing total safety solution for driver cockpit protection. We’re very excited to get it on the track because we always say the data doesn’t drive, drivers drive, so the next step in the process is to get it on track and see where we’re at.”

The “Aeroscreen” will be tested at the Indianapolis Motor Speedway on Oct. 2, Barber Motorsports Park in Leeds, Alabama on Oct. 7 and Richmond Raceway on Oct. 15. 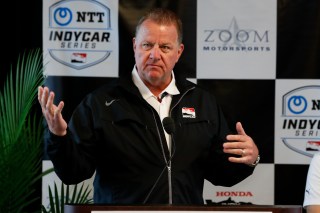 “It’s a very aggressive schedule, but the ball is in motion for a 2020 implementation,” Frye said. “So again, we think this is going to be something that’s going to really set the standard on driver safety. We’re excited about it. We really appreciate what all Red Bull has done along with PPG and Pankl. There’s been a lot of people involved and we’re excited about the future of that.”

“It’s very important that we remain true to our DNA, and our DNA is fast, loud, authentic and unapologetic,” Frye explained. “A couple of things we’re working on with this piece is one is for safety so the cars will have electric starters, so the driver spins, they stall the car, they’ll be able to start the car into 1 so the driver is not exposed.

“Another will be our AMR guys out there with an umbilical cord having to start the car, so they won’t be exposed. Another thing that’s really a byproduct of the whole system is hopefully we’ll keep the pace of the race going, so there won’t be as many yellows, so that will help, too.

“But one of the bigger parts, the biggest part in our opinion is horsepower, so our goal, our stated goal is to get over 900 horsepower. This product will give us at least 50 of that, so we remain true, again, to our DNA. We want to have less downforce but have more horsepower. We’re excited about this. We’ve got 10 current RFP’s out, so the plan is to have a chosen partner in the first quarter of next year for a 2022 implementation.

“These projects are big. I think they’re game changers for the sport, but at the end of the day we’ve got to be who we are, and that’s fast, loud and authentic.”