MONTEREY, Calif. – It was during two practice sessions Friday at WeatherTech Raceway at Laguna Seca that everyone seemingly was concerned about Alexander Rossi’s slow speeds on the race course.

While others appeared to lose their cool, Rossi was able to keep his composure. He worked skillfully with race strategist and Andretti Autosport Chief Operating Officer Rob Edwards and engineer Jeremy Milless to find a solution.

They found it by working with the other three drivers at Andretti Autosport and the team’s satellite operation at Harding Steinbrenner Racing with Colton Herta.

Rossi was able to advance through every session of qualifications and rank third in the Firestone Fast Six with a lap at 1:10.2105 around the 11-turn, 2.238-mile WeatherTech Raceway at Laguna Seca. He starts alongside Team Penske’s Josef Newgarden, who qualified fourth at 1:10.6719 (114.003 mph) in a Chevrolet.

For Rossi, his calm under Friday’s duress paid off with a fast effort in Saturday’s qualifications.

With three teammates plus Herta, Rossi’s crew was able to add a little of this and that to the setup, and the end result was a fast car in qualifications.

“Well, you always don’t plan on being last in qualifying,” Rossi told NBCSports.com when asked after the difference between Friday and Saturday. “It’s a new track, so we have the opportunity with such a big team to dedicate cars to roll through tons of different just setup philosophies. As long as you have a couple cars that are on a consistent platform that you know you can go back to and feed off of, I think it makes you more comfortable to do that.

Rossi said the team worked through various setups and philosophies before determining the setup used when it mattered on Saturday. 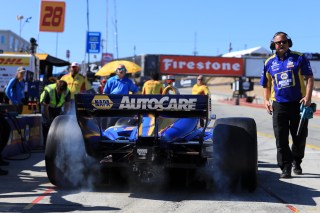 “We all work together every session,” Rossi said. “You have to when you have that many cars out on track. Everyone is doing a corner a little bit better or different than you, and you’ve got to put the puzzle pieces together.

“You definitely feed off each other for sure.”

There was a backup plan, just in case none of those changes worked.

“My engineer in his setup sheet has something with a drop-down item that says ‘Punt,’ so we punted a lot,” Rossi said with his typically dry wit. “That’s what we were doing.”

Simon Pagenaud, the driver from France who won the 103rdIndianapolis 500, looked quizzically at Rossi because he didn’t understand the term, “punt.”

“Like it’s fourth down and you need to give the ball away, and you just kind of,” Rossi began before saying, “You’re French, so…”

While that repartee drew a good laugh, one thing that is obvious is the top four drivers fighting it out for the championship are the four very best drivers in the series this season. They are ones that have won the most races and the biggest races of the season.

“Well, none of us got pole, so we clearly aren’t that good,” Rossi deadpanned.