Rahal also said in an exclusive interview that as each day passes, it is becoming more unlikely that he will be able to expand to a three-driver team next season.

“With each passing day, the reality becomes less that we will have one,” Rahal told NBCSports.com. “I don’t think it’s a dead issue at this stage, but if something is going to happen, it has to happen pretty quickly.

“We would like to, but only if it is right. I’m not interested in having a third car, just to say we have a third car.”

Sato has won three races with Rahal Letterman Lanigan Racing in the last two seasons, including victories in the Honda Indy Grand Prix of Alabama at Barber Motorsports Park in April and the Bommarito Automotive Group 500 at WeatherTech Raceway at Gateway in August.

He is a five-time IndyCar Series winner.

“He has developed a good relationship with engineer Eddie Jones, and they have had some pretty good races this year,” Rahal said. “They’ve had some that could have been better, but that is like anything in racing. Takuma is a very committed guy. There is some good chemistry between he and Eddie, and the team and it has produced some results.”

Sato again will team up with fellow driver Graham Rahal.

“The challenge we face for both Graham and Takuma is to be more consistent,” Bobby Rahal said. “We seem to be hot and cold. One weekend we are hot and the next weekend we are cold. If you look at Team Penske or Chip Ganassi Racing, they are pretty consistent. We need to figure out how to be that kind of a team. Our processes need to be better and that is our commitment to each other over the offseason, how to generate that consistency to fight for wins every race in the championship.”

At 42, Sato is one of the oldest drivers in the series, but he continues to get better. When he first arrived in the IndyCar Series in 2010, Sato had blazing speed but often drove over the edge.

Simply put, he crashed a lot.

In recent years, Sato has been able to harness that speed, and it has helped him excel. He has a better understanding of the racecraft. 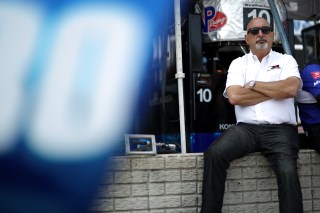 “He is making a lot fewer mistakes than he used to make,” Rahal said. “Some of that is having confidence in the car and the team. People forget, I retired when I was 45 and was still finishing on the podium. Takuma still has some good years left to win races and get on the podium.

“He works very hard off track. Sometimes, I think too hard to be honest because he is a very busy guy. We like him being on the team and having him as part of the team.”

Sato splits his time between his home in Tokyo with his family and his racing family in the United States. That makes him the most well-traveled driver in the series.

“Takuma was fundamental in NTT becoming the sponsor of the series,” Rahal said. “A lot of people don’t know that. He spends a lot of time in Japan taking care of his sponsors and it is demanding for sure.

“I think he travels too much. But, he’s not afraid to do it.”

He is also very popular with the sponsors on the team.

“Everybody likes Takuma,” Rahal said. “It’s fun to be around him.”

Sato first joined the team in 2012 and returned in 2018.  He has earned five wins in the series to date, three of which coming with the team.  The 2020 season will be his third consecutive with RLL, and fourth overall.

“I am very happy to continue our path together again after this season,” Sato said. “Every single member of the team is extremely loyal and have given me unbelievable support. I truly feel at home here and I am so proud of the team. We have had another great season this year and even had some tough times, but it only made our relationship stronger. I can’t thank Bobby, Mike (Lanigan), David (Letterman) and the entire team enough and I am looking forward to finishing the season strong and also looking forward to 2020.”

Sato has made 168 starts in the IndyCar Series since his rookie season in 2010.  His Indy car highlights include wins in the 2017 Indianapolis 500, 2013 Toyota Grand Prix of Long Beach, 2018 Portland Grand Prix, 2019 Honda Indy Grand Prix of Alabama and Bommarito 500 at WWT Raceway, with three of the five coming with RLL.

Of his 12 podium finishes to date, eight have come with RLL and he has earned nine Indy car poles, two of which are with RLL.  Prior to joining the IndyCar Series, he competed in 90 Formula One races between 2002-2008 with his highest finish of third at the 2004 United States Grand Prix.