MONTEREY, California – Colton Herta is like many 19-year-old kids who still live at home with Mom and Dad and have their buddies over to play video games and raid the family fridge.

But his father, Bryan, likes to point out that his young son is not a basement dweller.

“We don’t have a basement,” Bryan Herta told NBCSports.com. “We live in California. But he still lives at home. He’s still a great kid. His buddies still come over to our house, eat all of our food and drink all of our drinks out of our refrigerator. They just graduated high school together.

“I’m proud of him because despite all the success he has had, he is still the same good kid that he grew up as. That is as important to me as all of the wins in the world.”

This is where Herta is not the average 19-year-old.

He drives a race car in the NTT IndyCar Series and on Sunday, the son of four-time IndyCar Series race winner Bryan Herta capped off his rookie season with his second victory of the year in the Firestone Grand Prix of Monterey.

It was a season where Herta exceed his rookie promise with three poles and two wins. He won Sunday’s race at WeatherTech Raceway at Laguna Seca from the pole, celebrated the win in victory lane, then joined his buddies and drove back to his home in Santa Clarita, California.

Colton Herta is living the dream – win an IndyCar race on Sunday afternoon on the Monterey Peninsula and then drive home to Southern California to hang out with his friends and family Sunday night.

“I love living at home, and I love having home-cooked meals,” Colton Herta told NBCSports.com. “I love it so much because I have time away. I lived in Europe for two-and-a-half years, and it was like going to college for me. Every college kid learns it’s not fun not being at home.

“It was great to be back, and I do love being at home, but I don’t know how long I’ll be at home for.”

From the mid- to late-1990s, Bryan Herta was the most dominant driver at Laguna Seca Raceway. He won three consecutive poles from 1997-99 with back-to-back victories in 1998 and ’99.

From 1995-99, he never qualified lower than second place and could have won in 1996 if not for Alexander Zanardi pulling off “The Pass” in the “Corkscrew” section on the final lap.

Sunday was IndyCar’s return to Laguna Seca for the first time since the 2004 Champ Car Series race. So, it was only natural that a Herta return to victory lane. 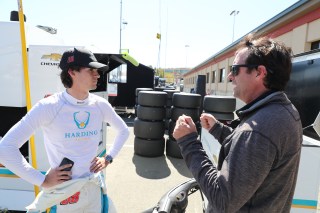 “It’s amazing,” father Bryan said. “This track, so many memories here. I think back to a year ago I drove the California 8-hour race here and shared a car with Colton, and we won that race and now he wins this race today.

“I could not be happier with what he has done. He has done amazing.”

His first career victory came in the IndyCar Classic at Circuit of the Americas (COTA) on March 24. Team Penske driver Will Power dominated that race until he waited too long to pit and was caught out of position by the only caution period of the race. After Power pitted, that put Herta in the lead, and he went on to become the youngest winner in IndyCar Series history just one week short of his 19thbirthday.

“We had the dominant car and the dominant pace the whole time, so this does mean a lot to me,” Colton said. “I don’t want to say it was handed to me at COTA because it wasn’t. I had to work for it at the end. This still means a lot, and it means even more being at Laguna.”

“He was under pressure the entire race, intense pressure from the very best guys in the sport,” Bryan Herta explained. “He was able to withstand all of it and not put a wheel wrong. I think he can be very proud of his performance today.

He exceeded those expectations in his rookie season.

He was not the Rookie of the Year, however as Chip Ganassi Racing’s Felix Rosenqvist finished sixth in the NTT IndyCar Series standings, one position ahead of Herta in the final standings.

“All credit to Felix,” Bryan said. “Felix had a great rookie season. This was an amazing rookie class. All four of the guys that were in it for the season, I think you are going to hear a lot more from in IndyCar. It didn’t go Colton’s way in the rookie of the year championship, but three poles and two wins, I think he can hold his head high.

“Colton had an amazing rookie season.”

The history of IndyCar racing includes some great second-generation drivers including the Vukoviches, Bettenhausens and Unsers.

Add the Herta name to that list, but that doesn’t mean the son drives the same as his father.

“I don’t know at my peak how it compared to what he does out there now, but he is not a different version of me,” Bryan said. “He does his own thing. He has his own driving style. He is a lot more aggressive than I was. He is maximizing what I do in the car, and he showed that today.”

Next season, Herta and his Harding Steinbrenner team move over to Andretti Autosport, where five drivers will operate out of the same racing shop. He expects to be even better next season and believes an Indy 500 victory and a series championship are realistic goals.

“I think it helps having everyone under the same roof,” Bryan said. “Everything this program was intended to do this year it did and more. It has worked so well for everybody involved. We just said, let’s make this more formal. Let’s bring it all together and let’s remove whatever separation still exists and make it one team.”

The offseason begins for young Colton, who will focus on his punk rock band, “The Zibs.”

“I have a punk band with some buddies of mine, and we have a West Coast Tour coming up,” Colton said. “It’s November 22 to 27 and we play Phoenix, San Diego, Los Angeles, Fresno, Sacramento and San Francisco. Be on the lookout. We’ll announce some details soon.”

On Sunday, past and future, father and son converged on the Monterey Peninsula in Victory Lane at Laguna Seca.

“It was so cool, and it was so awesome,” Colton said. “Twenty years ago, was his last win here. It’s really cool.