MONTEREY, California – Through the end of July, it was setting up to be a battle for the ages between American drivers Josef Newgarden of Team Penske and Alexander Rossi of Andretti Autosport for the 2019 NTT IndyCar Series championship.

But when Rossi was part of a massive first-lap pileup that was triggered when Takuma Sato of Japan was in the middle of a three-wide battle that also involved Ryan Hunter-Reay at Pocono on August 18, it was the tipping point to his championship battle.

Rossi knew the fight would continue, but the momentum had shifted.

Rossi entered that weekend just 16 points behind Newgarden, but the crash put him in a 35-point hole.

From that point forward, it was advantage Newgarden.

In football, it’s called, “running out the clock” and that’s all the 2017 NTT IndyCar Series champion needed to do. Rossi needed to win races; but Newgarden simply needed consistent, finishes.

Rossi’s Andretti Autosport team decided to make a gamble by starting in the race on used Firestone Reds, which were softer than the harder Firestone Blacks and would save a new set of Reds for later in the race.

It was a gamble that didn’t pay off.

Rossi’s sixth-place finish allowed Team Penske’s Simon Pagenaud to jump him for second place in the final standings. Newgarden’s eighth-place finish was all he needed to win the NTT IndyCar Series championship for the second time in his career.

Instead of a title, Rossi finished third in the season standings.

Even the vanquished admitted the best driver won the championship.

“I think we minimized a lot of our mistakes last year when ultimately I think in one way or another, we gave Scott Dixon a championship,” Rossi said, referring to last year’s championship battle. “I think we didn’t do that this year. I think just Penske and the 2 car (Newgarden) specifically were stronger than us, and that’s going to happen.

“You can’t take away from the fact that Josef led all but one race this season. And from a sporting perspective, probably the right guy won. He came into this thing with a pretty big lead, and if it had gone away on double points, I would have loved it, but ultimately it probably wouldn’t have been the outcome that should have happened.

“Josef did a great job, Simon did a good job there at the end, and we just were a couple points short.”

Rossi is a fierce competitor. He’s also the ultimate sportsman. That’s why even in defeat, losing a championship he so dearly wanted, he praised the champion as the best man in the season-long battle.

That fact was not lost on Newgarden. 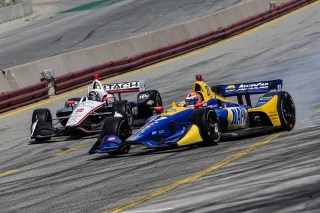 “I think that’s very kind of him to say,” Newgarden said of Rossi. “I think we were all very deserving. I think Alex has had a tremendous year. He’s certainly a tremendous competitor, very talented, very skilled at what he does, and he has a great organization behind him, too.

“You’ve got to respect the competition, and I think we’ve had incredible competition between him and Simon and Scott and Will. Those five guys have really been the core people I think at the top of this championship, and I think they were all deserving in a lot of ways to win the championship.

“I think we’ve had the most consistent year. I think I really do believe we’ve put together the best championship run, and I’m glad that found its way to sealing the championship.

“In a lot of ways, under the traditional points system, this would have been kind of a done deal. But it becomes a lot more exciting, and it obviously mixes things up with double points. That’s where the wild card kind of comes in.

“But the only thing I would say is I have a tremendous amount of respect for Rossi and his skill and his organization and what they’ve done. They’re fine competitors. They’re very difficult to beat every week, and that’s what you want.

“Hats off to them for running just as strong of a season I would say.”

On a day when Rossi needed his No. 27 Honda to go forward, he fought and struggled with tire degradation to keep it from going backward in the pack. He started third, but early in the race realized the car could not match the speed of others on the track and began to lose positions.

“We were trying to win, so you don’t want to go backwards,” Rossi said. “At the end of the race when we knew that the championship was pretty much out of touch, it became about trying to close down on Simon Pagenaud (to keep second place).

“For whatever reason, we didn’t have the tire life that we needed. I think we were one of the better cars on used Firestone Reds (softer tires) and were able to pull back a pretty big deficit, even on the final stop there after that restart. But our bed was kind of made after the first stint.

“It was pretty diabolical.”

For the second straight season, Rossi wanted to rise to the moment and capture a championship. Instead, he was left to explain why it didn’t happen.

“It’s unfortunate that two years in a row we’re in a position to where we have to kind of roll the dice,” Rossi said. “I’d rather be in either leading or within more of a realistic shot so that you can do more of a normal race-type thing.

“But regardless, I doubt that even if we started on new Reds, we had the pace to win. We probably had a third-place car, which again, wouldn’t have been enough anyway.

“We took a gamble. We were pretty committed to trying to do something different, and if we ended up third swinging, it was better than just being complacent and coming home second.

“It was a risk that didn’t pay off, unfortunately.