MOORESVILLE, North Carolina – The days following Josef Newgarden’s second NTT IndyCar Series championship have been quite busy, and it’s only going to get busier for the 28-year-old Team Penske driver.

Shortly after winning the championship with an eighth-place finish in Sunday’s Firestone Grand Prix of Monterey, Newgarden had a full schedule of media obligations that went well into Sunday night.

Then he was whisked away in a jet to fly to New York where he has been part of an NBC Media Tour to help promote the series and honor the champion.

Thursday night in Indianapolis, Newgarden and Team Penske will be honored for the championship at the INDYCAR Victory Lap Ceremony. On Friday, it’s off to North Carolina and back into his No. 2 Chevrolet-powered Indy car when he becomes the first IndyCar driver since 1999 to run laps at Charlotte Motor Speedway.

Back then, it was on the 1.5-mile oval. Newgarden’s Friday laps, however, will come on the 17-turn, 2.28-mile ROVAL after NASCAR Monster Energy Cup Series qualifications conclude.

“It’s all good stuff,” Newgarden said on a national teleconference from New York on Tuesday. “We’re in New York, just having a small media tour, trying to take in the celebration and spread the word that the IndyCar season was a great hit this year. There was a lot of transition, particularly with NBC taking over full time. I thought they kind of knocked it out of the park for their first year as the full-time provider of bringing IndyCar to network TV and trying to showcase our product and give people great access to our sport and to see that consistently on a same-make platform.”

“I’m going to go to Indianapolis on Thursday and get through a small celebration for the championship.”

Don’t expect Newgarden and the boys to celebrate too late because of the tremendous opportunity they will have to expose their high-speed style of racing to a NASCAR audience Friday night at Charlotte Motor Speedway.

“It’s been a very, very cool opportunity that Shell has provided us,” Newgarden explained. “They really wanted to do something to showcase their involvement with Team Penske and everything that we’ve done together. We had a very, very successful month of May together. As a team we won the Indianapolis 500, and Shell was a big part of that on my car specifically; we finished in the top 5. And that fourth place I think at Indianapolis was a great springboard and a big helper to our championship run.”

Although Newgarden is from NASCAR territory from just outside of Nashville, Tennessee, his racing roots are in open-wheel racing. From his days as a young driver in karting at Mark Dismore’s track in New Castle, Indiana, to competing in the junior formulas of Europe before returning to become Indy Lights champion in 2011, Newgarden has been groomed for IndyCar excellence. 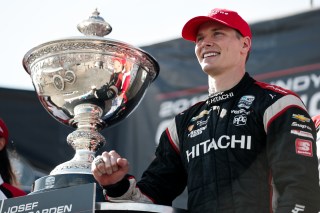 He won his first NTT IndyCar Series championship in 2017 and backed it up this year with another outstanding campaign.

He led the NTT IndyCar Series with four wins, 12 top-fives, 11 races led, and 490 laps led. Those were all series bests.

“It really has been a great thing to be able to finish this championship off the way we wanted to, as a team, with Team Penske,” Newgarden said. “We went into the finale with a goal of winning as a team, however that was going to shake out. The most important thing was bringing the championship to Team Penske.”

“I’m of course very, very happy that it worked out specifically for us on the 2 car, but it was a team effort, as it always is, and I felt like this year has been a great validation for me personally in my career, but also I’m very thrilled for our group that we were able to win the championship just because I felt like our guys have done such a phenomenal job and really put together what was a championship-caliber year. If we weren’t able to achieve that, I think it would have been a tough pill to swallow to not conclude the year with what I thought was everything it took to win a championship.”

“It’s a huge honor to just be a part of the IndyCar Series,” Newgarden said. “There’s a lot of drivers that never get the opportunity to get to this level, and then when you do get to the top level in the sport, being able to stay there and make the most of it is a whole other challenge.”

“But I’ve been really fortunate. It’s well-documented how fortunate I’ve been to be with the right people at the right time, and it started a long time ago in my career with Mark Dismore at his facility at New Castle Motorsports Park, and to go from go-karting there to Europe, back to America here, and now finally putting together a second championship, I think for me it’s just a great stamp on my career.”

“I feel that personally, and I’m really thankful that all the people that have put something into my career, I hope they can get some satisfaction from that, too, that all their efforts were going to something good, and just really pleased that I feel like we’ve put a good stamp on our journey.” 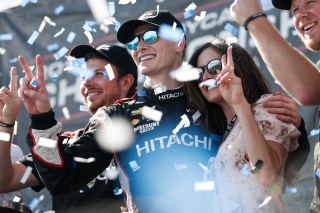 Newgarden, along with his fellow American racing rival Alexander Rossi of Andretti Autosport, have inspired a new group of aspiring, young drivers from the United States to consider IndyCar racing. Ten years ago, many of those drivers would have been trying to get into stock car racing.

NASCAR has seen a surge of top, young drivers join the series including Christopher Bell, who announced he will move up to Cup with Leavine Family Racing in 2020.

With INDYCAR on the upswing, and drivers such as Newgarden and Rossi becoming stars, young talent can see a future in this series that may not have interested them 10 years ago.

Back then, however, Newgarden was focused on success in IndyCar and now he is reaping the rewards of that career choice.

“I think somehow it’s all worked out as beautifully as it needed to,” Newgarden said. “I’m a perfectionist, so knowing what I know now, I think there’s a thousand things I’d have done different. But they’re all very little things. You just wish you had the education in the sport.”

“But it’s impossible, you can’t have the hindsight of eight years into an IndyCar career and then going back to your karting career and taking all the benefit of that is just impossible.”

“What I like about my career is I think the way it has shaped up and the journey I did take, it really prepared me for the cruelties of the sport, the realities of what it takes to really succeed and to not only succeed but to continue to succeed. I think that’s the toughest part about it is it’s one thing to get here, but when you get there, then figuring out how to stay and to continually find success, the reality of what that takes is what’s most difficult, and I think the hardships along the way, that’s what really prepares you for being able to do that throughout your career.” 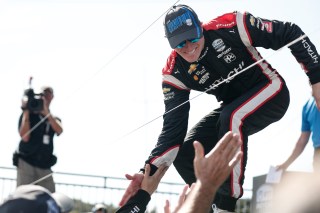 “Being in New York here, I always make the comparison that driving for Team Penske, it’s like playing for the Yankees,” Newgarden said. “You’re basically competing with a dynasty here, and they’re the best to have done it and they’re the group that everyone wants to be and the group everyone wants to beat. So, there’s a lot of pressure to perform in that environment.”

“I like it. I don’t mind the pressure, but I really enjoy the confidence that the team gives you that you have everything you need.”