MONTEREY, California – At 82, Roger Penske is as successful as ever.

In 2019, he extended his Indianapolis 500 record to 18 victories when Simon Pagenaud won the 103rdIndy 500 on May 26. He has also placed all three of his Team Penske NASCAR Cup drivers into the Playoffs and his Acura Team Penske IMSA operation is among the best in the business. His Australian Super V8 squad led by record-setting driver Scott McLaughlin.

“When you think about as long as we’ve been in this sport and continue to have a team of people who can execute as they have, not just this year but the past several years, the continuity of our team and the people makes the difference,” Penske said afterwards. “Josef is a great champion. You can see it in his eyes. You could see it the first time he won with us, and with Will Power and Simon Pagenaud, who just had an outstanding season, when you think about three wins and certainly the Indy 500 is the crown jewel that all of us want to have every year.”

With a “Sweet 16” in IndyCar Series championships, along with Penske’s other tremendous accomplishments this season, could this be his best season ever?

“I think we’ve got 35 or 36 wins so far this season and a bunch of poles across the different series,” Penske said. “We’re in all of them. We got to execute at Road Atlanta with the Acura team in IMSA, and McLaughlin has just had a super season when you think about winning 17 races, probably more than anyone has ever won for us in one season. I think Mark Donohue had the record before.

“When you get into the Cup side, what do we got, eight to go here, and we’ve got three great drivers, and it’s going to come down to the last four and maybe the last corner and what have you. But the good news is we’re still in it, and our goal obviously is try to win all four.

“We understand it’s a formidable challenge with the people that we’re racing.”

In addition to Newgarden getting his second IndyCar Series championship and his second in the past three years, Pagenaud took second place in the standings away from Alexander Rossi in the final race of the season.

That gives Team Penske a 1-2 finish in the standings and more importantly, redemption for Pagenaud after he was winless in 2018.

“I think when he won the race in the rain (at Indianapolis in the Grand Prix), had the pole (for the Indy 500), you could see he was a different guy running in the Indianapolis 500,” Penske said. “To see him execute and then go to Toronto on one of the toughest courses that we have, we race on, and to see him win there, he really made a statement to us as a team and certainly for himself, not only here in the U.S. but around the world.

“I look at Scott Dixon as the guy we’ve got to beat every weekend in and out, and racing him wheel to wheel, Simon really proved his mettle.

“Obviously he’ll be part of our team next year.”

Penske represents excellence in all of his endeavors, whether it’s on the race track or in the boardroom as one of the leading business and industrial leaders in the United States. 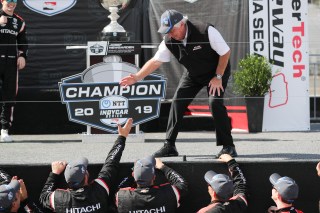 He looks for the same competitive qualities in his drivers and has three of the best including 2014 IndyCar champion and 2018 Indy 500 winner Will Power, 2016 IndyCar Series champion and this year’s Indy 500 winner, Simon Pagenaud and two-time champion Newgarden.

“I think Josef is a pro,” Penske said. “He led throughout this whole season, came off right away with victories. I know he was on edge a little bit, but I know he’s glad it’s over.

“I think there’s so much emotion inside for someone like that because you’ve got to be perfect today, and I think the fact that he was able to execute the way he did, it was just a time to let it all out. His family was there, his mom, his grandmother, she came all the way from Denmark to see this race, so it was pretty special for her.”

It was an emotional experience for the young driver from Hendersonville, Tennessee. He broke down in tears after he clinched the championship.

Meantime, Penske’s stomach was churning for most of the race over the strategy that it took for Newgarden to clinch the championship. The team chose to play it safe rather than put the driver at risk.

Essentially, Newgarden tucked behind Alexander Rossi, who entered the race as his closest competitor, and stayed there. With a 41-point lead, as long as Rossi didn’t win the race and force Newgarden to finish fourth or higher, it would be enough to win the title.

“My stomach churns all the time, so I’m used to it,” Penske quipped.

The competition may never be better, and Team Penske is still on top. And in a season that had outstanding storylines, another championship for the most successful team in IndyCar history exemplifies excellence.

“I think the races are the right length, and we have a really key TV partner with NBC obviously showing us today on national television,” Penske said. “It was a real superstar event for us, and obviously for the whole series and the IndyCar family and industry around the world that really looks at us every day.”

Marcus Armstrong was a Scott Dixon fan his entire life, and when he was 8, the aspiring young racer asked his fellow New Zealander to autograph a helmet visor that he hung on his bedroom wall.

Next year, Armstrong will be Dixon’s teammate.

Armstrong was named Friday as the fourth IndyCar driver in the Chip Ganassi Racing lineup and will pilot the No. 11 next season on road and street courses.

A driver for the five oval races on the 17-race schedule will be named later.

The No. 11 is essentially the No. 48 that seven-time NASCAR champion Jimmie Johnson drove the last two seasons, with Chip Ganassi making the change to run four cars numbered in sequential order. Indianapolis 500 winner Marcus Ericsson drives the No. 8, six-time champion Dixon drives the No. 9, and 2020 IndyCar champion Alex Palou drives the No. 10.

Incredibly grateful to @CGRTeams for this opportunity in IndyCar. 2023 starts now 🇺🇸 pic.twitter.com/Q7hp66Hxkv

So just who is the second Kiwi in the Ganassi lineup?

A 22-year-old who spent the past three seasons in Formula One feeder series F2, a Ferrari development driver in 2021, and former roommate of Callum Illot and former teammate of Christian Lundgaard – both of whom just completed their rookie IndyCar seasons.

“I’ve always been attracted to the IndyCar championship because it’s one of those championships that’s been really well televised in New Zealand since I was young, mainly because of Scott and his success,” Armstrong told The Associated Press. “As time progressed, as I got closer to F1 and single-seaters, the attraction to IndyCar grew just because of how competitive the championship is – I like to challenge myself and the level of competition in IndyCar is remarkably high.”

Armstrong, from Christchurch, New Zealand, was set to travel from his current home in London to Indianapolis this weekend to meet his new team. He won’t need an introduction to Dixon, the 42-year-old considered the best IndyCar driver of his generation and Armstrong’s unequivocal childhood hero.

Last season, Dixon earned his 53rd career victory to pass Mario Andretti for second on the all-time list. Dixon has driven for Ganassi in all but 23 of his 345 career starts.

“For a long time I’ve been a Scott Dixon fan. I don’t want to make him cringe with our age difference,” Armstrong told the AP.

He convinced his father after winning five national karting championships to allow him to leave New Zealand for Italy at age 14, where he moved by himself to pursue a racing career. Armstrong said as soon as he’d received parental permission, he’d never look back.

Armstrong was in Formula 4 two years after his move to Italy and won that title in his first season. He won four races and four poles in F3 in the 2018 and 2019 seasons, then collected four wins and eight podiums in three seasons of F2.

“Maybe it’s a strength, or maybe it’s a weakness, but I always thought I was capable of doing great in the sport,” Armstrong told the AP. “I think you probably have to succeed in the sport, you need to believe in yourself. I always pictured myself being in IndyCar.

“As Scott’s teammate? I can’t specifically say I saw that. It’s an extraordinary chain of events.”

Armstrong becomes just the latest driver to leave Europe, where F1 is the pinnacle but has only 20 seats each year. Alexander Rossi began the trend in 2016 when the American left F1 and won the Indianapolis 500 as a rookie. He’s been followed by Ericsson, last season’s Indy 500 winner, Romain Grosjean, Illot, Lundgaard, and on Thursday three-time W Series champion and Williams F1 reserve driver Jamie Chadwick was announced as driver for Andretti Autosport in IndyCar’s second-tier development series.

Armstrong said he could have remained in F2 for a fourth season, but he’d been watching IndyCar for so long, and after conversations with Illot and Lundgaard, he decided to make the move to what he believes is the most balanced racing series in the world. He tested for Dale Coyne Racing at Sebring in October.

He doesn’t know if European racing is done for good, just that he wants to be in IndyCar right now.

“I don’t want to think too far into the future, I’m just grateful for this opportunity that is standing right in front of me,” Armstrong said. “I want to perform as well as I can in the near future and just consolidate myself in the fantastic chance that is IndyCar and just do my best.

“I’m not looking at F1 as a landing spot – I am looking at IndyCar, and that’s exactly why I am here.”