INDIANAPOLIS – INDYCAR has the throttle down as it races full speed ahead into the “Aeroscreen Era.”

The innovative design was created by Red Bull Advanced Technologies of Milton Keynes, United Kingdom. That company is part of Red Bull’s Formula One team, which worked on a Formula One “Halo” of its own in 2016.

Horner agreed to work on the project and turned it over to Andy Damerum, the business development engineer of Red Bull Advanced Technologies, earlier this year.

INDYCAR and Red Bull Technologies announced the concept on Carb Day at this year’s Indianapolis 500 on May 24.

“To me, this is a total industry-changing driver safety solution,” Frye told NBC Sports.com Wednesday. “We couldn’t be prouder of this. This to me is a game changer. This is big.

“The aero kit was obviously very cool. We got our identity back. We like the way it races, all that type of stuff, less downforce, more horsepower, that’s the direction, that’s all good. But I think this is something that will really change the complexion of the sport for a long time to come, so this is big.”

The key to this system is it takes two different components and creates a safety-redundant system to protect the driver from debris. 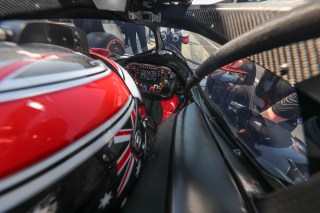 “It’s been a great project to work on from Red Bull Advanced Technologies side with all the partners that we’ve been working with on this,” Damerum said. “I’m really proud to see the device on the car. Getting together over the last week has been I’d say relatively faultless.

“I’m really pleased with the outcome.”

The necessity for such a protection device came after IndyCar Series driver Justin Wilson was killed when the nose cone off Sage Karam’s crashed race car hit him in the helmet at Pocono Raceway on August 23, 2015. He died the following day.

Last year at Pocono, Robert Wickens was involved in a massive crash in Turn 2 that launched his car into the catchfence. Wickens suffered paralysis from the waist down, but was able to stand, and even dance, at his wedding in Indianapolis this past Saturday.

As INDYCAR President, Frye made it a priority to devise a protection device that would minimize serious injuries in the future.

“I think we certainly had very high expectations and probably exceeded them today,” Frye said during a break in the test session. “We’ve run almost 600 miles to this point, and we’ve still got a couple more runs to go, so I think it’s done everything we thought it would do and then some.

Dixon has worked on the Dallara Simulator that was equipped with the INDYCAR “Aeroscreen” recently, but Wednesday’s laps at the Indianapolis Motor Speedway provided him with “real time” feedback.

“I think it’s been an intense project and one that I think a lot of people have done their due diligence on to get it to this point,” Dixon said. “Today has been pretty much seamless. We went through a bunch of configurations for cooling and where we can kind of push the air to control the helmet and how it feels and how much pressure you have there.

“Ultimately it’s just very quiet. I can hear my radio for a change. Normally I can’t hear that. So that’s kind of nice.

“There’s actually a lot less load on the helmet, too, so visually there’s been really no impairment. I think some of the areas with tear-offs and stuff and where they seam in the middle will be sort of fixed kind of down the road, too, to make it even better. But ultimately, I think today we’ve just run through a long list of projects that we needed to get through. 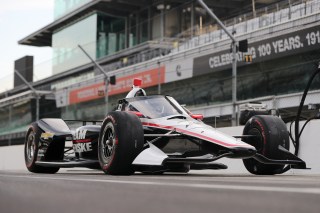 Power offered his thoughts on the Aeroscreen and how he believes the windshield combined with the elements of a Halo would provide tremendous protection.

“I’m so impressed with how quickly all this came together,” Power said. “To have the first run in and really no major issues, it’s just like Scott said, the tear-offs are obviously something they’re going to work on, how they fit and glare on the inside with what paint you put on and such. But the vision is fine. There’s no problem doing a stint with bugs and such that get on the screen.

“It’s just little things that need to be worked on that it’s honestly — I’m so happy that we have it. It’s really a huge step in safety, and I think it’s the best of both worlds. You’ve got the halo and you’ve got a screen, so I think that you’ll see other open-wheel categories follow suit because there’s just — you think about it, when you’ve driven it for a day, you’re going to feel naked without it. If you took it off, you’d feel pretty naked because there’s not much protection there. So, very happy that we’re moving ahead with it.”

The two drivers were so impressed with the first run with the Aeroscreen, they would be confident to enter a race with it this weekend if possible. Before that happens, however, there will be more testing including next Monday at Barber Motorsports Park in Birmingham, Alabama; October 15 at Richmond Raceway and November 2 at Sebring International Raceway.

“You could race this weekend, no problem,” Power told NBC Sports.com. “You could do that. That wouldn’t be an issue. That shows what good of a job they’ve done just bolting it straight on. So that’s what you get when you work with the best people in the game like Red Bull Technologies and obviously IndyCar, as well, and all the partners involved. You get a product like this, which is pretty seamless, you know, straight in.”

“I think as we’ve been working on it today, there’s some configurations that you could adjust, and those might be personal things, as well, but I think it’s spot on,” Dixon told NBC Sports.com. “It’s good to go.

“But we’d be the only two with it. I think there’s only two of them so far.”

More will be made after INDYCAR goes over the testing data and makes some changes to improve airflow and cooling.

Meantime, it’s full speed ahead for INDYCAR into what it believes will be a safer future.