INDIANAPOLIS – From a broader view, last Wednesday’s Aeroscreen test at the Indianapolis Motor Speedway was successful on all counts. It proved that INDYCAR is moving forward with the latest cockpit safety innovation that can greatly increase driver protection in the wake of several serious incidents that have taken place this decade.

The movement toward greater cockpit protection increased after Justin Wilson was killed when the nose cone from Sage Karam’s crashed race car hit him in the helmet in 2015 at Pocono Raceway. Driver Robert Wickens suffered serious injuries from a crash at Pocono at the start of the 2018 race but is making impressive progress from paralysis that saw him able to stand and dance at his wedding in Indianapolis on September 28.

Wickens injuries were caused by rapid deceleration when his car hit one of the fence posts after it was launched into the air when it ran over the back of Ryan Hunter-Reay’s car. His helmet came dangerously close to hitting one of those poles, and that likely spared him from an even more serious head injury.

The INDYCAR Aeroscreen, which is a combination of a “Halo”-like structure used by Formula One with the added safety benefit of an aerospace-material, canopy-like windshield, could greatly reduce the danger involved with some of these crashes. 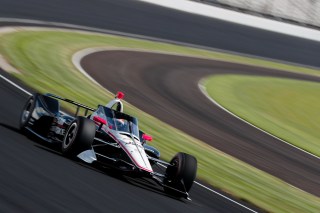 “I’m really impressed how quickly it has come together and I can’t thank those guys enough because it is a big change in terms of safety,” Team Penske driver Will Power told NBC Sports.com last Wednesday at the Indianapolis Motor Speedway. Power, along with five-time NTT IndyCar Series champion and 2008 Indianapolis 500 winner Scott Dixon participated in last week’s tests.

Another test is set for Monday, October 7 at Barber Motorsports Park in Birmingham, Alabama. Next Tuesday, October 15, it will be tested on a short track for the first time at Richmond Raceway.

A final test is scheduled for November 2 at Sebring International Raceway.

For the drivers, they are confident INDYCAR is trying to make increase safety while keeping the competitive performance of the race car.

“It will certainly change the car,” driver Jack Harvey told NBC Sports.com. “That’s a lot of weight to put in extra in that one spot. It will be interesting to see how that changes. After that, I like the idea of the halo. The screen itself raises a few more questions.

“INDYCAR, has been so innovative and on the forefront of safety that we can trust their want and desire to make the cars safe. We just have to make sure we go in the direction that is best for everybody. The halo and the framework look pretty solid. If that is the route everyone wanted to go, I would be happy to go with that, for sure. It can be an unpopular conversation to talk to people about, but I love being here and I love IndyCar racing. We are trying to be as safe as we can be.

INDYCAR and its test drivers believe visibility factors will be addressed and corrected during the tests. Some of these issues include the material used for tear offs that will be placed on the outside of the Aeroscreen. These are similar to the tear offs that are currently used on the visor of the driver helmets that they tear off after they are covered with small bits of debris or fluid from another car.

The tear offs on a windscreen will be removed during pit stops. 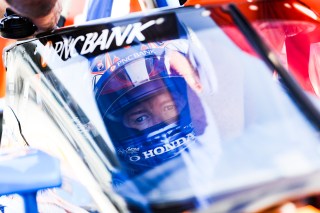 “Visibility needs to be a primary factor, especially racing the speeds that we do,” Harvey said. “I haven’t driven it, so it would be wrong to pass any comment. I’ll speak to Josef Newgarden after he has driven it and Will Power and Scott Dixon after today. You have to take the experience of the guys in the series. The people testing it are multiple champions and Indy 500 winners. Being new to the series, I look to them for support.

Conor Daly is one driver, however, that isn’t sold on the Aeroscreen concept. He admits as an “old school” driver, it’s going to be a bit strange to be surrounded by an additional structure between himself and the race.

“I’m very curious,” Daly told NBC Sports.com. “I’m not a huge fan of the whole Aeroscreen thing because I like my air flow, but if they sort it out for safety, that’s really cool. As long as they go through testing, that’s awesome. They know what we as drivers are looking for and what we would like to see out of this program.

“(INDYCAR President) Jay Frye has done a great job and they hear our concerns, so we will see what happens.”

Many fans have been outspoken on how the screens change the look of the race car, but it’s hard to take those criticisms seriously if the device can save drivers from getting killed. There were also critics of the HANS Device when it was implemented in 2001 following NASCAR driver Dale Earnhardt’s death, but when it became obvious the HANS Device eliminated the Basilar Skull Fractures, those criticisms quickly ended.

“It’s the evolution of the sport,” Andretti Autosport engineer Ray Gosselin told NBC Sports.com. “Things change over time. We can’t always have things the way we liked them 20 and 30 years ago. The sport has changed. Anything for safety, the sport is all for. 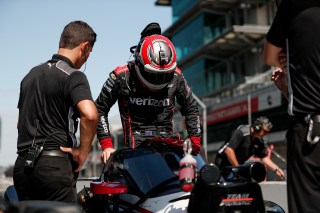 “We like the way the racing is right now.”

The racing may change, though, and to what extent won’t be determined until all cars are on the track equipped with the extra weight from the Aeroscreen. Gosselin and other race engineers will have to factor that in when they devise speed setups on the race cars because the center of gravity, aerodynamic drag and downforce will be changed.

The downforce may actually be reduced because the airflow coming off the Aeroscreen may go well above the rear wing, rather than onto the wing. The rear wing helps keep the car stable and planted to the race track.

“We only have the additional aero numbers from Dallara; we don’t have anything final yet,” Gosselin explained. “We only have the target CG (center of gravity) height and Fore Aft CG changes so you can do some simulations based on that to recover your balance.

“But it’s a big unknown once you get it all together. And, once you get you get your aero and mechanical together, what is going to happen to the tires? They haven’t even gotten to the tire testing portion of this yet, so Firestone comes back with a tire that recovers the balance of those changes and you don’t have to do anything.

“We’ll find out Monday, too, when Ryan Hunter-Reay runs at Barber Motorsports Park. The track has been repaved and what tire is Firestone going to come out with to cope with changes in mass and CG with the Aeroscreen.

“Until we get to that stuff, it’s hard to say. Are we throwing all of our setups out the window? Are we keeping them? Are we tweaking them? I don’t know yet.” 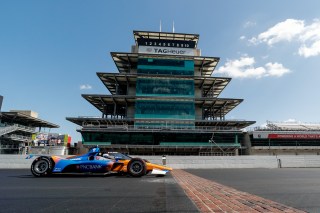 The Aeroscreen may also “punch a bigger hole” in the air, and that could potentially bring back the draft to such tracks as the Indianapolis Motor Speedway. Before the current aerodynamic package entered competition in 2018, the previous configuration featured “rear pods” that created a large “wake” from the car in front. That meant drafting played a big role in the style of racing.

“A lot of people liked the style of racing we had from 2012 to 2017,” Gosselin said. “There was a lot of passing for the lead and a lot of passing throughout the pack. You were never really out of it. The racing we’ve had the last two years, you are really earning your spots to make one move.

“If you go back to Alexander Rossi and Simon Pagenaud at the end of this year’s Indianapolis 500, if you go back two years, they would have swapped positions three or four more times in that last little restart?

“Will we go back to that? Will it punch that big of a hole in the air?

“We will find that out in testing.”

There are other areas that will need to be refined, such as improved airflow through ducts at the bottom of the Aeroscreen. Drivers admitted the inside of the cockpit will increase in temperature, and teams will find ways to cool the inside better airflow.

“We are trying some different stuff to stop helmet buffeting,” Power said. “We think we have fixed that. Driver cooling, we are trying to duct the air in the best way. So far, it’s been pretty good. No problems at all.

“It’s a pretty good day because you get a feel over the long run with really hot conditions and also how the cooling is for the driver.

“It doesn’t change the way the car drives; if anything, it feels more stable and better. The car felt pretty good out the box, but we want to see how it runs in traffic. It’s very early days with this thing, so it’s not like we want to run in the pack or anything.

“I think you would be fine too, actually. It’s pretty good.”

Another aspect is the higher screen changes the way drivers get in and out of the race cars. INDYCAR has addressed the safety aspect of that with its famed AMR Holmatro Safety Crew, which continues to practice getting drivers in and out of the configuration.

“I’m sure getting in and out of the car, you will get better at it,” Power said. “It’s something we will be practicing a lot.” 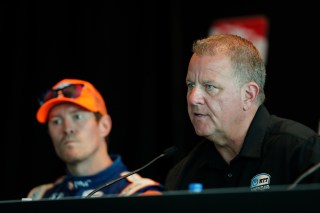 Frye has been a key figure in moving this project forward. He is confident teams will find ways to improve the look of the car.

And, the new screens, even create an additional sponsorship opportunity to the teams that previously didn’t exist with a true “open cockpit.”

“We will let them monetize the front of the screen so they can put sponsor logos on it,” Frye told NBC Sports.com.” We have looked at every part of this.

“Monetizing is a good thing. Economics matter. It will create a monetization opportunity.

“And most importantly, it’s safer.”