In Australia, it’s simply known as “The Great Race.”

One of the world’s great road races, the Bathurst 1000 in New South Wales, Australia, will take place this weekend and the NTT IndyCar Series is well represented.

Famed team owner Roger Penske is there with his regular Virgin Australia DJR Team Penske Supercars team that includes has two cars driven by Fabian Coulthard and Tony D’Alberto in the No. 12 Mustang with Scott McLaughlin and Alex Premat in the No. 17.

McLaughlin has won an incredible 17 races and 14 pole positions in the 24 races held so far in 2019. But he has never won the Bathurst 1000, that goes up Mount Panorama and back. 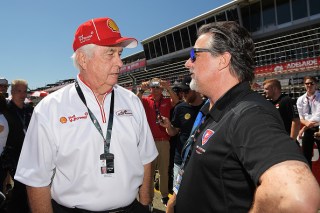 “Winning the Bathurst 1000 is the Australian version of winning the Indianapolis 500 or the Daytona 500,” McLaughlin said. “It has always been a dream of mine to stand on the top step at Bathurst with the Peter Brock Trophy. Finishing in third place last year was bittersweet as Alex (Premat) and I were so close to take it out. We’ll head to the mountain this year, hungrier than ever to take the win.”

McLaughlin holds a whopping 598-point lead over his nearest competitor for the season championship. He conceivably could crash out of the remaining two races on the schedule and still win the championship.

Alexander Rossi, the 100th Indianapolis 500 winner in 2016 and a perennial contender for the NTT IndyCar Series championship, and Arrow McLaren Racing SP driver James Hinchcliffe will be participating in their first Bathurst 1000 for Walkinshaw Andretti United. IndyCar team owner Michael Andretti is an ownership partner in the team along with McLaren’s Zak Brown and Australia’s Tom Walkinshaw. 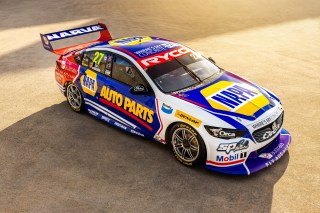 Hinchcliffe and Rossi will co-drive the No. 27 NAPA AUTO PARTS Holden Commodore as they attempt to etch their names into Supercars history. It’ll be a new adventure and a challenge in a Holden Commodore that features a V8 engine producing 650 horsepower. The car weighs 3,086 pounds and has a top speed of 190 mph. It can accelerate from 0-60 mph in 3.4 seconds and has a right-hand drive, 6-speed sequential shift transmission.

“I think once people who are fans of IndyCar tune into this race, see the competitiveness of it, the uniqueness of the track and just how cool the series is and great the drivers are, there will be a lot more eyeballs paying attention,” Rossi said. “And we’re here to help all of those things – and to have some fun and be competitive.

“Hopefully, with NAPA AUTO PARTS being a U.S. name coming on board to support us for this event and their expansion into the Australian market, it opens a lot of doors for us all. “We got to do some testing in the No. 27 Holden Commodore at Winton last week and had our first live look at the track today; it’s going to be a wild weekend. The track is every bit as impressive – and even more so – in person as it’s been on TV and simulators. We’re looking forward to getting the NAPA car out there and seeing what we can do.”

Hinchcliffe has also become a popular addition to this year’s race as Australian race fans have discovered his engaging personality.

“The Bathurst 1000 is the Indy 500 of Supercars racing, I certainly hope that we do well enough that it opens doors for other guys to come over and have this opportunity,” Hinchcliffe said. “And, hopefully enough people back in the States and Canada are watching and it brings a little extra attention.

“Obviously we want to do well and show well for the team. It’s a long race, 1000km, a lot can happen. If you just stay out of trouble and hit your marks throughout the course of the afternoon, it’d be great to come home with a top 10.” 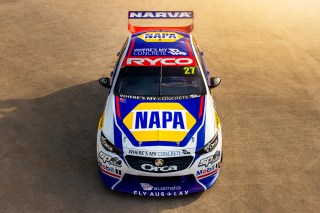 An endurance race, the Bathurst 1000 sees two drivers share the seat, with everyone in the team playing a part, especially in pit lane. There are seven mandatory pit stops during the race that are all crucial in a result.

Additionally, each car is required to complete a front brake rotor change during one of the stops, on top of the mandatory front brake pad change. The brake rotor and caliper will be swapped out for a new set, adding a new dimension into the race strategy.

The first turn, Hell Corner, is a 90-degree left-hander. Mountain Straight, a gentle climb where the cars reach speeds in excess of 150 mph, leads into Griffin’s Bend, an off-camber, right-hander that leads into The Cutting, a sharp left-hander with a steep incline. 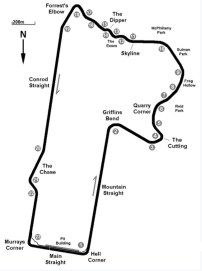 Reid Park follows, a complex corner where a number of drivers have spun after not short shifting at the apex. The course continues down to Sulman Park and McPhillamy Park. Drivers are unable to see the descending road and enter Skyline and the first of The Esses at approximately 140 mph before The Dipper, one of the most famous corners in Australian motorsport.

Cars then negotiate Forrest’s Elbow before powering down Conrod Straight, the fastest section of the track where cars can reach nearly 200 mph. The Chaseis a long sweeping chicane where cars are on the rev limiter turning at 300 km/h before a large braking zone slowing exit speeds into the 80s. Murray’s is the 23rd and final turn and also the slowest part of the circuit, before cars return to the start-finish straight.

“The biggest difference is the car,” Hinchcliffe said. “The V8 Supercar, you have a roof, you have twice the weight of an Indy car. Similar horsepower, a lot less grip. For us, it’s getting used to the different driving style of the different cars. Our cars are very nimble, very light, a lot of downforce. The Supercars are the complete opposite. It’s a big adjustment for Alex and I to get into these things and up to speed as quickly as possible.

“The drivers in the V8 Supercars Series are massively talented. We have about one to three days each in the car. We have never seen the track. We are under no illusion. It’s going to be a very tough fight. It’s going to be difficult.

“At the same time, we are competitive. We are going to go out there and do the best we can. A top 10 for us realistically feels like a win. In a field this competitive with this type of competition, it would feel like a win.”