While NTT IndyCar Series team owner Roger Penske was able to celebrate his first victory in the famed Bathurst 1000, two of the star drivers of the series also competed in the race for Walkinshaw Andretti United.

Alexander Rossi, the 100th Indianapolis 500 winner in 2016 and a perennial contender for the IndyCar championship, and James Hinchcliffe shared a Holden Commodore in the famed endurance contest at Mount Panorama in New South Wales, Australia.

They finished 19th after starting on the last row of the 26-car grid. At one point in the race, they were running in the mid-teens before finishing just inside the top 20.

“I came here with a huge amount of respect for this place and this Series, and I’m for sure leaving with no less,” Rossi said afterward. “We knew this would be a big challenge. We didn’t come into this with an arrogance that it would be easy. By the same token, we didn’t really come here to finish 19th, either, so we are a bit bummed about that.

Rossi admitted it took time to get comfortable with the car, but once he was able to familiarize himself with the Commodore, they made consistent improvement in every session.

The gap between the “Wild Card” entry and the front had to do with overall familiarity with the cars, according to Rossi. 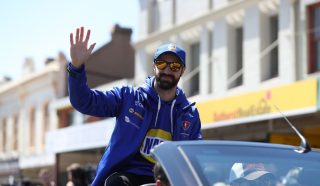 He also proved to be a driver who learned in one weekend how to work with the 650-horsepower Holden Commodore.

“First ‘1000’ in the books – it was quite an experience all around,” Hinchcliffe said. “We had an OK start, but the first stint was honestly a real handful. The track conditions were quite a bit different than what we had pretty much all through practice with it being really cold and overcast and/or wet. So with the track heating up, the balance wasn’t quite there. I was working a lot with the tools in the car, so struggled a little bit in that first stint to get things on the right track.

“Alex jumped in after that, and we started to make some progress on the balance. Track grip started to come up with the rubber going down and he had a couple really good stints. I jumped back in and had a couple good stints. But one of the big challenges at that point, though, is once you’re a lap down, with the blue-flag rules here, you lose so much lap time just trying to let the leaders go by. It’s an unfortunate reality, but if you don’t want to do it, don’t go a lap down.”

Even with as much experience in racing as Hinchcliffe and Rossi possess, it’s a sport where a driver always learns something new. This past weekend in New South Wales, Australia, was one of those times.

“Oh, for sure,” Hinchcliffe said. “I think every lap you do at this place puts you in a better position than the lap before. Over the race distance, you have a lot of things that you experience that are going to be valuable to know next time you find yourself in that position. For sure, there are lessons I wish I could tell my four-day younger self, but that’s the name of the game. You’ve got to go out there and pay your dues.

“We tried to run our race and make as few mistakes as possible. We made a couple little ones, I think that’s to be expected. A lot of more experienced guys made even bigger mistakes than we did, so I think there’s a lot to be proud of from the whole team.” 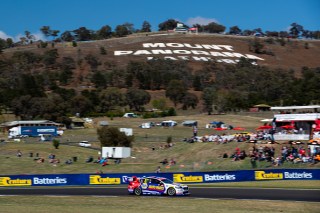 A main goal was to be running at the finish, and the team was able to accomplish that. With that goal accomplished, Hinchcliffe wants do to more.

“I’m dying to come do it again,” Hinchcliffe said. “It was a ton of fun. These cars are so, so unique, but they are a blast to drive when you get it right. It feels so good when you get a strong lap here. Obviously, we still have a couple of seconds to find, so I can only imagine what that feels like. But hopefully, we’ll get an opportunity to do it again one day.”

Although Hinchcliffe is eager to return, Rossi has to think about whether he wants to return to Bathurst one day.

“I don’t know yet,” Rossi said. “You may have to ask me that again later, I’m still digesting the weekend. I think the whole Walkinshaw Andretti United team did a really good job of helping James and I. We felt really comfortable in the car at the end, but ultimately we’re missing something in terms of pace and performance.

“I think the overall confidence of the car was at the limit. Just sliding around. The high-speed corners I felt really comfortable. So, I think the biggest thing is just understanding the car at its limit. If I was starting all over again tomorrow, that would have made it a much easier proposition.

“Nonetheless, I think we learned a lot.”