RICHMOND, Virginia – Scott Dixon won the first time he ever raced at Richmond Raceway way back in 2003. He started on the pole and led all 206 laps in the race.

When reminded that he was a two-time Richmond Raceway winner at Tuesday’s Firestone Tire Test for the NTT IndyCar Series, Dixon quipped, “That was a while ago.”

Eleven years, in fact. The cars and engines back then were different and the racing on the short ovals frankly wasn’t as competitive as it was today. The last time the NTT IndyCar Series was there in 2009, there were only three lead changes among three drivers.

From the first NTT IndyCar Series race at Richmond in 2001 through the last time Indy cars were there in 2009, there were only 24 lead changes. That’s not for one race, that’s a decade’s worth of races combined.

Times have changed and thankfully, for the better.

With a different racing package today, that features more horsepower and less downforce, along with tire constructions from Firestone that allow the tires to dramatically lose grip over the course of a fuel run, the racing on short ovals has become some of the best race in the series.

Iowa Speedway was patterned after Richmond Raceway and staged its first IndyCar Series race in 2007. Since that time, INDYCAR has staged some of the most spectacular races of each season. There were 16 leads changes in the 2010 race and seven lead changes in Josef Newgarden’s victory at Iowa in July. 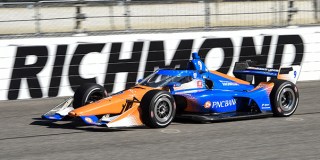 Dixon and Newgarden returned to Richmond Raceway on Tuesday, October 15 for a Firestone Tire Test at the three-quarter-mile short oval. It was also another opportunity to test INDYCAR’s “Aeroscreen” that greatly improves driver protection inside of the cockpit.

“It’s been very positive, the return to Richmond, everybody is pumped,” Dixon told NBC Sports.com. “Going back to the heritage of IndyCar racing, short ovals are much loved not only by the fans, but also from the drivers and everybody that is part of it. You have to work on the combination to put it back. Definitely, the cars we have had lately on short ovals like Iowa and St. Louis have provided some fantastic racing. That is what we have to try and accomplish.”

In order to achieve that goal, INDYCAR teams and drivers have eight months to work and develop a competitive racing package for the popular short oval in the Commonwealth of Virginia.

Fans have wanted the IndyCar Series to return to Richmond as did drivers and other team members. INDYCAR officials heard those calls and were able to return the Virginia short oval to the schedule after an 11-year break.

“I was here a few months ago with the return of Richmond on the schedule, but it’s a lot more fun to be back in the car here,” Dixon said. “I’m excited to be back here, back on track. It’s a little different look here with the Aeroscreen. I was at Indianapolis in the test and now back here. It seems that everything is going very well with all the testing for the Aeroscreen. They tested last week in Alabama as well.

“It’s cool to be back here. It’s a difficult track; one that is quite low grip with the current configuration of the Indy car right now. It’s a bit of a handful, but that is what makes it fun and difficult.

“Today, though, has been about the tire test.”

Firestone Racing engineers brought 15 sets of tires per driver to test with various constructions and compounds.

“I didn’t realize there were that many tire options, to be honest,” Dixon admitted. “I think we went through 15 sets where you are normally doing six or eight. They brought a pretty big range of compounds and constructions and even staggers. This afternoon will be a combination of those. The long runs will be difficult because a full-tank run will be 80 or 100 laps. That’s going to take some time.

“They want to make sure everything runs smoothly, and we don’t have failures. Firestone is very good on the safety side. That is box No. 1. Then, performance and degradation.

“They have to be careful about not bringing too good of a tire here because you do want the fall off and the raceability and for people to struggle. The last time here, the tire was so good, nobody had much falloff and they couldn’t pass.

“What we have seen the past few years with oval racing, degradation has been a key.”

Both Dixon and Newgarden are confident Firestone will bring a tire back to the race on June 27, 2020 that will degrade over the course of a run, allowing the opportunity for more passing at Richmond than in the past.

“It’s different than 2009 in the fact the grip is lower, which may be the tire or the track aging as well,” Dixon explained. “But that opens up a lot better racing because the degradation and the falloff of the tire is greatly increased. From a 10-lap period, you are losing one-second a lap. That’s big for us. Typically, we are losing a few tenths. That will equate to some really good racing. When we come back for the Open Test, trying to run the alternate lines and the high lines are something that is going to be very useful.

“You are trying to be consistent as possible to go through the tires. We went through 10 or 12 different compounds and constructions on Tuesday morning and a few more sets in the afternoon. Those 10-lap runs, you are trying to do exactly the same thing. Once you start running a line and there are no other cars experimenting in a test, it’s easy to get off-line and make a mistake.

“We need to get that compromise so we can run different lines. With the tire degradation we are seeing, that can definitely be an option.”

INDYCAR has strict limits regarding testing during a season. When Dixon arrived in the series in 2003, teams could test close to 60 days a season. This year, it’s less than six.

With speeds in the 180 to 190 mile per hour range on a track that is three-quarters of a mile in length and 24 to 25 cars on the track at the same time, that sounds crazy.

“Always,” Dixon said with a smile. “I would say there are a good 20-plus crazies out there, which is part of the fun. The last couple of years have been fantastic with the racing we have had and the restarts. There is a big variation of experience where people have come from, so you see a difference in style, how they drive and how they restart. That has created some fantastic racing.

“Yes, it gets tough. These tracks, it happens so quickly. This is very similar to what we have at Iowa, but this is a bit shorter, so it is happening that much quicker as well.”

The team’s notes from 2009 are fairly obsolete, according to Dixon. That that time, the evolution of the cars, weight distribution, engine performance, tires and how the car is constructed has dramatically changed.

But the style of racing that it takes to get around the track comes back quickly to the two-time Richmond winner.

“When you come to an oval, there are really only two corners,” Dixon explained. “That makes it simpler than a road course. But they all have their subtle differences, whether it’s the entry to Turn 3, the car is very light, and you come over a crest in the exit of Turn 2 where it flattens off very quickly, it’s very easy to spin the car.

“Those things come back immediately to where I have either crashed or almost crashed. You don’t forget those scenarios.”