When Arrow McLaren SP announces its two drivers in the 2020 NTT IndyCar Series, youth will not only be served, it will be showcased.

In an expected announcement later this week, Arrow McLaren Racing SP will introduce the last two Indy Lights Series champions as its IndyCar lineup for next season.

That is expected to include Pato O’Ward, the 2018 Indy Lights champion, and last year’s Indy Lights title winner, Oliver Askew.

It also will be announced that popular veteran driver James Hinchcliffe has been released from the team.

Hinchcliffe has a close working relationship with Honda, including commercials for Honda Canada and American Honda. He was expected to be retained by the Chevrolet-backed Arrow McLaren Racing SP for 2020 when the team’s merger was announced on Aug. 9.

With Askew and O’Ward, Arrow McLaren Racing SP is doubling down on its youth movement. It’s similar to the move McLaren’s Formula One team made by hiring teenager Lando Norris to drive one of its two F1 entries this season.

The original plan was to pair a young driver with a veteran, such as Hinchcliffe. Arrow McLaren Racing SP originally pursued 19-year-old Colton Herta, who won two races and three poles in 2019 as a rookie for Harding Steinbrenner Racing. Andretti Autosport successfully put together a deal to make him the team’s fifth full-time driver.

McLaren Chief Executive Officer Zak Brown has kept an open dialogue with O’Ward since shortly after the 20-year-old Mexican’s deal collapsed with Harding Steinbrenner Racing before the 2019 season.

O’Ward struck a deal with Carlin for a few IndyCar races, but when he was named as one of the Red Bull drivers in May, O’Ward focused on making it to Formula One.

O’Ward left Red Bull earlier this month but was confident he had a path to a great ride in IndyCar.

Askew dominated the 2019 Indy Lights Series after successfully climbing the Road to Indy Ladder system. Askew won the championship in his only Indy Lights season with Andretti Autosport, winning seven of 18 races (including seven poles and 15 podiums).

Askew (pictured at the top) turns 23 on December 12. McLaren officials have had interest in him all season.

Askew tested with Chip Ganassi Racing during the summer and was under consideration for a third seat with the Honda-backed team before it chose to sign former Arrow Schmidt Peterson Motorsports driver Marcus Ericsson of Sweden. 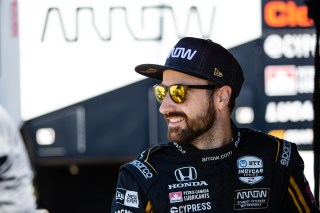 Hinchcliffe was told he was off the team Sunday night, according to RACER.

The 32-year-old driver from Oakville, Ontario is among the most popular drivers in IndyCar because of his engaging personality, which landed him an appearance on “Dancing with the Stars” in 2016. He finished second to Olympic Gold Medal gymnast Laurie Hernandez.

Hinchcliffe also was featured in ESPN “The Magazine” in its “Body Issue.”

He has also triumphed over adversity, including a near-fatal crash at Indianapolis Motor Speedway in Indianapolis 500 practice on May 18, 2015. Hinchcliffe nearly bled to death when his left leg was pierced by parts from the car.

Out of a ride at the beginning of November, there aren’t any options currently available on any of the Honda teams in IndyCar for Hinchcliffe.

Hinchcliffe has overcome much bigger personal adversity than this but to be hunting a ride entering November creates a massive career challenge.

Much more remains to this story, and NBCSports.com will continue to follow it.