Colton Herta may be best known as one of the rising stars of the NTT IndyCar Series, but away from the track, the 19-year-old Californian can be found in a loud, fast-paced environment of a completely different kind.

In his spare time, Herta plays drums in the Zibs, a punk rock group he helped start a year ago with a few of his friends from high school.

Later this month, the Zibs will go on their first tour, with five stops in California and Arizona within a five-day stretch.

“It definitely started as a hobby,” Herta told NBC Sports. “Obviously, it’s grown a little bit more serious with us getting booked for shows and stuff, but we still all do it for fun.

“Racing is the priority and it always has been, but this is kind of a fun thing to do with the time off that I get.”

Herta isn’t the only racer who enjoys jamming out on the drums. Fellow IndyCar competitor Will Power is also a talented drummer, as is NASCAR’s Bubba Wallace.

But in the Zibs, Herta isn’t the only star of the show. He is joined by guitarist Adam Snow, bassist Chris Broadbent and lead singer Jon Graber.

Prior to the formation of the Zibs, none of the members aside from Snow had ever played in a band before, and Graber said he remembers what inspired the original trio of him, Herta and Broadbent to create the band.

“We played a lot of RockBand, the video game,” Graber said “We decided that we wanted to just start a band because we got bored of the video game.” 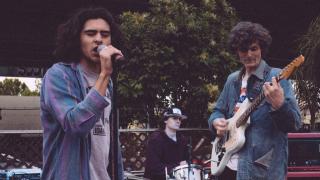 “I picked up drums when I was about eight or nine and then I stopped playing for a bit,” Herta said. “I thought it would be fun to just try and play again.

“Chris and Jon actually did not know how to play an instrument in the beginning and so they learned from the ground up.”

Now, a year later, the Zibs is ready to embark on their first tour. The band will perform alongside “I Set My Friends on Fire” and “Everyone Dies in Utah” during all five stops, and Graber, who is studying music in college, is looking forward to hit the road for a week.

Graber also said that the band is planning to release an album online before the tour, and is hopeful to perform more shows following the tour, but the main goal for the group still remains the same: to have fun and make music that they enjoy.


With their first show just three weeks away, the Zibs hope to draw a great crowd for each performance, and although Herta’s involvement with the band is completely different from his racing duties, IndyCar fans are more than welcome to attend any and all of the Zibs performances.

“I’d love to see some people out if they’re interested and have the time off,” Herta said.

The Zibs’ 2019 tour is below. Music by the band can also be found on Apple Music, Spotify and Youtube.