The full shape of Roger Penske’s purchase of INDYCAR and the Indianapolis Motor Speedway won’t be seen for months. The final purchase from the Hulman George Family won’t be completed for the next 30 to 60 days while it gets reviewed by lawyers and approved by the government.

Beyond that, however, the future for both INDYCAR and IMS got a lot brighter.

Already on the upswing since the 100th Indianapolis 500 in 2016 revived interest in the series, and a new television package with NBC and sponsorship with NTT went into effect in 2019, the series is now under control of one of the most successful businessmen in the world.

Penske epitomizes excellence from the boardroom to the racetrack. The Penske Corporation has revived businesses such as Detroit Diesel and is in charge of some of the most successful automotive dealerships in the country.

But it’s Team Penske and its 53 years of success that have made Roger Penske a legend.

He has a record 18 Indianapolis 500 wins and 16 IndyCar “National Championships.” In all forms of racing, Team Penske has more than 545 victories and championships ranging from sports cars to two NASCAR Monster Energy Cup Series titles. 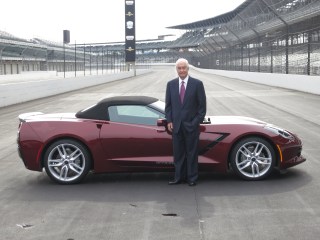 Success is not just celebrated; it’s expected. And that is why this acquisition is so important to INDYCAR, IMS, the Indy 500 and its future.

At 82, this may seem like an extremely ambitious project, but it also will be his legacy.

Under the guidance and direction of Penske, it is set to succeed. It will be operated with a look to the future while maintaining and respecting the traditions of the past.

“We have a parent now that appreciates the history of the past, knows our business inside and out and gets things done,” INDYCAR CEO Mark Miles said. “I love that Roger has said more often than not, he cares about the talent, the people around him and how hard they work, how much we can get done.”

Penske’s accomplishments have already made him a face on auto racing’s “Mount Rushmore.” On Monday, however, he has taken on a “Mount Everest” challenge.

“We don’t have a gymnasium full of people to bring here. When we buy a business, we look at the people, and the great thing is we’ve rubbed shoulders with many of the people here over the years, so we’ve seen this organization grow.”

Penske vows to “walk every inch” of the Indianapolis Motor Speedway and make some capital improvements where needed. He hopes to improve the business and ensure its future in a manner that he has done with his other business ventures.

“I think we look at businesses that we invest in where we have domain knowledge, and I think the fact that we’ve been coming to this track for almost 50 years and seeing the growth of the series and understand the technology and it’s also a great business opportunity for us to grow it to the next level,” Penske said. “We look around these thousand acres and we say, ‘Can this be the entertainment capital, not only the racing capital of the world but entertainment capital of the world in Indiana? Will we be able to support the state, the governor, the region, the city, the town of Speedway, and continue to grow it?’

“We’re going to invest capital. We know the economic benefit today that this race brings to the region is amazing, and we want to grow that. It’s important to us.”

Penske attended his first Indianapolis 500 in 1951 as a 14-year-old with his father. He has a photo of himself sitting in the seat of an old “Roadster” show car from that day. He entered the Indianapolis 500 for the first time in 1969 and with the exception of the CART boycott years of 1996 to 2000, has been back virtually every year since.

But he considers himself “the new guy” in terms of operating and maintaining the Indianapolis Motor Speedway, the Indy 500 and INDYCAR.

Change starts on Tuesday, according to Penske, but it will be very well-measured before any action is taken.

He is going to sit down with the current staff and get their top 10 things that can be changed, improved or protected.

“I always like to work from a top 10 and see the things that we can do to make it fan-friendly, certainly from a competitive perspective,” Penske said. “I’m planning to really step down from being a strategist on the pit box (on his IndyCar Series team). You won’t see me there on race day. I think I’ve got a bigger job to do now, is to try to see how we can build the series to the next level. It will be nice to bring another car manufacturer in. I know (INDYCAR President) Jay Frye is working on that; can we have someone else come in to join the series.

“I think we look at the speedway itself, the investment with the $100 million that was put in a few years ago before the 100th, I think you’ve seen a tremendous change, and we want to add capability as there are more fan zones. Can we run a 24-hour race here? Can we run a Formula 1 race here? What are the things we can do?

“This is a great asset. This business is not broken. This is a great business, and the leadership team that’s been here has done an outstanding job, and what we want to do is be a support tool.”

Team Penske will continue to compete in the NTT IndyCar Series and Penske hopes it’s not viewed as a conflict of interest. But in auto racing, team owners and speedway owners have often been the same. After all, Penske ran Michigan International Speedway from 1973 to 1999 and California Speedway from 1997 to 1999. At one time, Tony George was the president of the Indy Racing League and team owner of Vision Racing.

“I don’t want to leave this conversation without knowing that I understand the integrity, and there’s got to be a bright line, and to me I know what my job is,” Penske said. “Hopefully I’ve got enough credibility with everyone that we can be sure that there is not a conflict, and I’ll do my very best to be sure that isn’t.

“If you think it is, I know that you folks will tell me pretty quick. So, I’ve got a lot of guys watching me.”

Penske also reiterated he has no intention of changing the management teams that are currently in place but will name a new board of directors that includes a diverse group of people to support the business.

“You can be sure that with an investment like this that I’ll be here other than the month of May,” Penske quipped to a question posed from NBC Sports.com.

At 82, Penske was born in Shaker Heights, Ohio, attended college at Lehigh University in Pennsylvania, started his business empire in Philadelphia before becoming a captain of industry in Detroit who will preserve one of the greatest treasures in the state of Indiana.

“The biggest single-day sporting event on planet Earth is about to get even bigger and better,” Indiana Governor Eric Holcomb said. “I couldn’t be more excited about the future of the Indianapolis Motor Speedway with ‘The Captain’ Roger Penske at the helm.

“Mr. Penske’s vision, team and high expectations will ensure Indiana’s most iconic asset continues to grow. Along with INDYCAR, the Indianapolis Motor Speedway forms the core of an entire racing industry that employs thousands of people and pumps hundreds of millions of dollars into our economy. As a racing fan, my excitement is only equaled by my appreciation for the longtime Hulman-George commitment to the past and future of the sport of racing and to our great state.”