By announcing on Monday morning, he is purchasing INDYCAR and the world’s most famous race course, now it’s official.

In a historic move that is both stunning in terms of magnitude and impact on the sport, and the fact Penske and the Indianapolis Motor Speedway were successful in keeping it under wraps, the most successful team owner in auto racing history now owns the series and the “World’s Greatest Race Course.”

The purchase was announced by the 82-year-old Penske along with Indianapolis Motor Speedway Chairman of the Board Tony George and Hulman & Company President and CEO Mark Miles, who is also the CEO of INDYCAR.

Penske becomes just the fourth different owner of the Indianapolis Motor Speedway since it was built by Carl Fisher, Arthur Newby, James Allison and Frank Wheel in 1909. The first Indianapolis 500 was held in 1911 and won by Ray Harroun. The entire Hulman-George family was in attendance at Monday morning’s announcement.

“It’s bittersweet, but very exciting for us because we are passing the torch to an individual who has created an organization that is not only dynamic but ideally suited to take over this stewardship,” George said of Penske. “It’s a corporation that is family involved but with a track record that is really without compare.

“Our process took us to a point where we all agreed we needed to have a conversation with Roger Penske.”

George’s overture to Penske about the deal came at Laguna Seca before the final NTT IndyCar Series race of the season on Sept. 22.

“I approached him at the final race of the season on the starting grid and told him I wanted to meet with him to talk about stewardship,” George recalled. “He got a very serious look on his face.

Emails were exchanged followed by meetings culminating with Monday’s announcement. 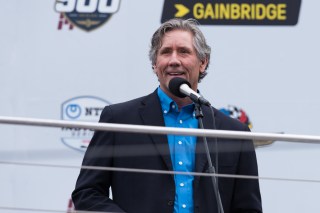 “Not many things are kept under wraps around here, but this was fairly well contained,” George said. “We are able to present this to the world this morning.”

Details of the purchase price were not revealed. The deal won’t be officially closed until January, pending government approval and a new board of directors will be established.

Miles cited the tremendous success of the 100th Indianapolis 500 in 2016 as the springboard for INDYCAR’s continued uptick in growth and interest. A key part of that is NBC’s current television package that began this past season with all races on NBC and NBCSN rather than split between different networks.

“There’s no question we have great momentum now,” Miles said. “Every fan metric shows growth. We’ve kept our traditional longtime fans, and we’re growing the fan base and adding younger fans all the time.

“It’s without a doubt in our minds the best form, most exciting form of racing object the planet, and with Roger and Penske Entertainment as our leaders now, we see nothing but more of that growth.”

Penske also spoke of the importance of NBC to helping grow the series.

“TV ratings, attendance, social media up,” Penske said. “NBC, not only network but also on cable has been tremendous.  The competition couldn’t be better. The racing product is excellent. I think the venues are well balanced.”

Penske recalled the first time he ever attended the Indianapolis 500 as a 14-year-old with his father in 1951. It inspired him to go into racing and now continue that as the owner and steward of one of the greatest sporting events in the world.

“I talked to Mario Andretti today and A.J. Foyt, and we all agreed what the Indianapolis 500 has meant to us as individuals and as a company, and certainly our company,” Penske said. “I think that what it really says, that in the United States of America, if you work hard and you’re committed and you have a great group of people, you get great success. So today I hope my dad’s looking down at me and looking at this group and saying, Son, you did a good job.

“I’ve got a big commitment here to take over certainly as the steward of this great organization and what’s been done here in the past for so many decades. It’s my commitment to the Hulman family. The fact that you would select us is an opportunity to take on this investment, it’s amazing, and I just want to thank Tony and everyone else that’s been involved in this.”

Penske also offered assurances that many of the current employees at INDYCAR will be retained.

“Remember, I’m going to be the new guy in town, so we’re going to take those plans and see if we can add anything to it that makes it better,” Penske said. “But I don’t think you build a business overnight. We have no intention of changing the management teams that are in place today.”

According to Miles, there are 260 people employed by the Indianapolis Motor Speedway, INDYCAR or IMS Productions. Penske said he plans on keeping many of them, as well as integrating management from the Penske Corp. He also said members of the Hulman-George family can remain as part of the organization and can potentially buy interests into the new ownership group.

Penske said he will walk every inch of the property over the next few days to get an assessment of what may or may not be changed. He also said guaranteed starting positions for the Indianapolis 500 may be considered.

Penske has been a strong proponent of that to help full-time INDYCAR teams maintain relationships with sponsors by guaranteeing they will be in the biggest race on the schedule.

Over the next 30 to 60 days, Penske will be making a “top 10 list” for fan and competitive enhancement after analyzing the facility and talking to staff. He would like to add another venue to the series to have a well-balance schedule but did not reveal where that would be. He did stress that it would likely be in North America.

Penske would like to utilize the facility for greater entertainment purposes and even mentioned the possibility of a 24-Hour sports car race at the facility. As for NASCAR’s Brickyard 400, Penske said, “It’s here to stay.”

“There’s nothing more to me, that gives me more feeling than to stand on the grid and see the flyovers and see the men and women in the services each year,” Penske said. “I can tell you we’re going to push harder on that to be sure we respect them, and the tradition and the pomp and ceremony is certainly going to be top of mind.”

Penske will no longer be on the timing stand calling race strategy in INDYCAR races, so that he can focus on the bigger picture of running the series. That should help avoid any appearance of “conflict of interest.”

“The sanctioning body and the INDYCAR will be a separate company, and the other assets will be in the Indianapolis Motor Speedway,” Penske said. “I think you have to ask our competitors at this point. Tony (George) has been a car owner and we were talking about it today.

“I don’t want to leave this conversation without knowing that I understand the integrity, and there’s got to be a bright line, and to me I know what my job is, and hopefully I’ve got enough credibility with everyone that we can be sure that there is not a conflict.

“I’ll do my very best to be sure that isn’t. If you think it is, I hope that — I know that you folks will tell me pretty quick. So, I’ve got a lot of guys watching me.”

The news has been met with very positive feedback from fellow INDYCAR team owners.

“Roger Penske’s commitment to the sport we love is over six decades long and I am confident that his stewardship of the Indianapolis Motor Speedway and the IndyCar Series will ensure a great future for the sport,” Bobby Rahal said. “His many successful business ventures underline the fact that he is the perfect custodian of one of the most historic venues in the world and is the perfect architect to build the foundation for the next 100-plus years of the sport. We look forward to working with Roger in order to make the IndyCar Series and the Indy 500 the best it’s ever been.”

NBC Sports’ Dustin Long was able to talk to James Sullivan, a partner of Dale Coyne Racing with Vasser and Sullivan, and get his reaction to the news.

“I think it’s fantastic for the sport,” Sullivan told Long. “I can’t think of a better person to lead us into the future from IndyCar’s perspective. Jimmy and I are pretty well vested and it’s an important part of our future and Roger, in our mind, is probably the best guy to take that thing forward.