The magnitude of the Hulman George Family’s decision to sell the Indianapolis Motor Speedway, INDYCAR and other assets of Hulman & Company to Roger Penske is one of historic proportions.

It is the end of a family dynasty in sports that began on Nov. 14, 1945 when Anton “Tony” Hulman, a businessman from Terre Haute, Indiana, purchased a dilapidated Indianapolis Motor Speedway from its previous owner Eddie Rickenbacker.

Penske is pictured above with Hulman in 1971.

The famed “Brickyard” had been shuttered from 1942-45 because of World War II and once it ended, Rickenbacker, a World War I hero and flying ace, had moved on to operate Eastern Airlines.

The Indianapolis Motor Speedway was shut down. Rickenbacker padlocked the gates and the facility began to rapidly deteriorate. When one of auto racing’s biggest names at that time, Wilbur Shaw, attempted to perform a tire test for Firestone, he was dismayed at the condition of the famed facility.

He met with Rickenbacker, who told him the Indianapolis Motor Speedway would be demolished, and the land would be sold as a housing subdivision.

Shaw set out to save the track but needed a major investor.

Ultimately, Shaw arrived in Terre Haute and met with Hulman.

The Indianapolis 500 was not only saved but would go on to become the goliath of all sporting events in the world in the following years.

Shaw would travel all over the United States — as he would say, “Coast to coast and border to border” — to spread the news of the Indianapolis Motor Speedway and the famed Indianapolis 500.

Tragically, Shaw was killed in a private plane crash near Decatur, Indiana, on Oct. 30, 1954. He was just 52 years old at the time, and Hulman was thrust into the public spotlight as the face of the Indianapolis Motor Speedway and Indianapolis 500.

Hulman and his wife, Mary Fendrich Hulman, had one child, a daughter named Mari. She married race driver Elmer George. Children followed including a son, Tony, and daughters Nancy, Josie and Kathy.

They were born just down the street from the Indianapolis Motor Speedway, and that fact was not lost when Tony George, Hulman’s grandson and the chairman of the board of Hulman & Company (owners of the Speedway, INDYCAR and a variety of other businesses), announced on Nov. 4 that the family was selling IMS and INDYCAR to Roger Penske.

It was just 10 days short of the 74th anniversary of his grandfather’s purchase of the Indianapolis Motor Speedway, the beginning of one of sports’ greatest family dynasties.

This wasn’t a sale as much as a transfer of “stewardship” of one of the greatest sporting institutions on Earth and one that deserves a special place in history – the Indianapolis 500.

Hulman did more than restore the Indianapolis 500 to its glorious past, he built it into a Mount Olympus of sports.

After a 74-year run, the Hulman-George Family realized they had taken it as far as they could and needed to find the next “steward” who could take the Indianapolis 500 and INDYCAR to even greater heights.

That is why Penske was not only the obvious pick, but the only choice to become the next “steward” of the Indianapolis Motor Speedway.

“We’re very proud to have come together the last several months, I think, to make some very important decisions, one about an iconic asset that the family cares very deeply about, as well, and that’s Clabber Girl Baking Powder,” George said at Monday morning’s announcement of the sale. “But now this one is extra special to all of us because we’ve all grown up around it. Nancy and I, we came home from the hospital to home just right down the street here, so we’ve literally grown up around it. Our kids and grandkids have done the same.”

At that point, the emotion of the moment overwhelmed the 59-year-old George. His voice choked up, and tears welled in his eyes. 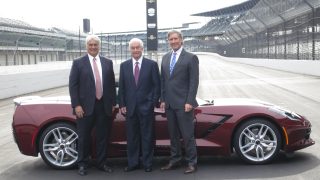 “Bittersweet, but very exciting for us because we know that we’re passing the torch to an individual who has created an organization that is not only dynamic but it’s ideally suited, I think, to take over the stewardship,” George continued. “It’s a corporation that is family-involved, much like ours. But with a track record that is really without compare.

“We’re very excited to be in a place where our process took us to a point where we as a family all agreed we needed to have a conversation with Roger Penske. I approached him at the final race of the season, not wanting to distract from the task at hand, which was bringing home another championship, but I wanted to wish him well on the grid, and I just simply said, I’d like to meet with him and talk about stewardship.

“He got a very serious look on his face and followed up after he clinched his championship with an email and then another email the next morning, and we set it up. I invited Mark to join us for that meeting, and kudos to both organizations who worked very closely together very quickly. It was a pretty easy — not easy by any means, but this isn’t their first rodeo, your first rodeo, your first rodeo. So they were able to execute around diligence very quickly, and it led to an announcement that miraculously — not many things are kept under wraps around here, but this was fairly well contained, and we were able to really, I think, present this to the world this morning.

“That’s kind of the way it came about, and we’re just very thankful for the opportunity to be here today and to work towards this closing. Very excited about welcoming the Penske Corporation, Penske Entertainment as new corporate citizens.”

Penske and the Penske Corporation becomes just the fourth different owner of the Indianapolis Motor Speedway since it was built by Carl Fisher, Frank Wheeler, Arthur Newby and James Allison in 1909. The first Indianapolis 500 was in 1911. Fisher’s group sold the Speedway to Rickenbacker in November 1927 and kept it operating during some difficult years.

The “Modern Day” Indianapolis 500 was essentially the “Era of Hulman.”

After 74 years, that era has come to an end. The sale will officially close over the next 60 days of so and become part of Penske Entertainment.

Roger Penske is the most successful auto racing team owner in history with 545 wins including a record 18 Indianapolis 500 victories and 16 IndyCar “National Championships.”

Current management of INDYCAR and the Indianapolis Motor Speedway will be retained. That includes INDYCAR CEO Mark Miles, INDYCAR President Jay Frye and IMS President Doug Boles. Penske will add some of his key people into the management structure.

“It’s without a doubt in our minds the best form, most exciting form of racing on the planet, and with Roger and Penske Entertainment as our leaders now, we see nothing but more of that growth,” Miles said.

With Penske, INDYCAR and the Indy 500, are ready to go to the next level.

“There’s just no question that we have the opportunity to grow, and (INDYCAR) will be one of the greatest series as we go forward.

“We’re going to invest capital. We know the economic benefit today that this race brings to the region is amazing, and we want to grow that. It’s important to us.

“This business is not broken. This is a great business, and the leadership team that’s been here has done an outstanding job, and what we want to do is be a support tool.”

It was a difficult decision for the Hulman George Family and the board of directors to make. After all, the Indianapolis 500 and the Speedway have been parts of their lives since they day they were born.

In order to preserve a future of continued growth, the family realized it was time to pass this great sporting event to a new owner that understood the value of “stewardship.”

“It’s obviously emotional, emotionally difficult, hence the choking up,” George said. “But we all love it, and we all care deeply for it. I think we all realize that as a family and as an organization, we probably had taken it as far as we can.

“I think that Roger, his structure, his resources, his capabilities that he demonstrates is only going to take this to another level, so that’s what we’re all about. We’re supporting that continued — elevating this asset and staking a new claim on its future.

“We, with emotion, are happy to be here today.”

George as often an embattled and beleaguered man who guided over a tumultuous time in the history of the Indianapolis Motor Speedway, that included a split with CART over the creation of George’s Indy Racing League in 1996.

On Monday, here was George, now giving up control of a family business empire that began with great, great grandfather Herman Hulman when he moved to Terre Haute from Germany in 1854.

It was George who tried to put the end of an era into proper perspective.

“I can’t say that I know for sure, but it’s an honor,” George said in response to a question from NBCSports.com. “It’s close to 170 years. In the past 18 months or so, I had the opportunity, which I never took the time to do before, but that was to read a historical transcript of sorts – it’s really a book on the first 100 years of Hulman & Company. That really opened my eyes to a lot that I didn’t know. Some of my sisters knew some of that lore and whatnot, but I wasn’t really familiar with it.

“This (decision) has kind of been baking for the last 18 months or so. It is somewhat bittersweet, because the 170-year-old company as we know it is coming to an end. But we’re very, very proud. We feel like we’re going to continue to be a part of it. Everybody who comes here has their own story, and there are memories and the accomplishments that make it special for them.”

It’s the end of an era and George realized that.

“We’re just fortunate that our family and our family business has had a 73-year run being part of it and being a steward, and we continue to be grateful for the opportunity that we may have going forward, and I for one intend to take advantage of it,” George said. “We’ll be here supporting the events with teams. Maybe our little team to expand to do other things, which we’re going to need to do. So, if Roger has a 24-hour race, by George, I think we’re going to try and be here. We may have to look at getting into NASCAR, too.

“I think once the momentum continues to swell here, I think it’s going to raise all boats, so hopefully, we’ll have that opportunity to continue to be involved and work right alongside Roger and his group and all of the teams and fans and media that come here to enjoy it.”