In a world where nobody is able to keep a secret, especially in auto racing, legendary business leader and race team owner Roger Penske and INDYCAR CEO Mark Miles were able to keep the biggest story of the year a secret.

That was Monday morning’s stunning announcement that after 74 years of leadership and ownership of the Indianapolis Motor Speedway, the Hulman George Family was selling the track, the Indianapolis 500 and INDYCAR to Penske.

In an exclusive interview with NBC Sports.com on Thursday, Miles revealed the extreme lengths both sides went to so that nobody found out about this deal ahead of time. That included meeting with Penske at his Detroit offices early on Saturday mornings and late on Sunday nights.

The most important way of keeping it confidential was containing the number of people who were involved.

“We thought it was important to keep it quiet until we were ready to announce it,” Miles told NBC Sports.com. “The reason for that is No. 1, we wanted employees and other stakeholders to hear it from us and not through the distorting rumor mill.

“That was the motivation. 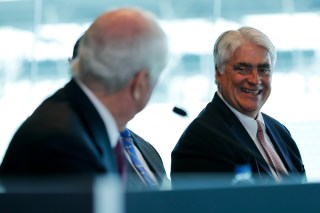 “We just didn’t involve many people. For most of the time, there were four people from Roger’s group in Michigan and four people from here (IMS/INDYCAR) involved and nobody else. There were just four of us. We all knew that none of the eight were going to talk to anybody about it until very late.”

Even key members of both staffs were kept out of the loop, notably Indianapolis Motor Speedway President Doug Boles, who admitted earlier this week he was not told of the impending sale until Saturday when he was at Texas Motor Speedway for the NASCAR race.

Both Penske and Miles realize the way a deal or a secret slips out is often from people far outside of the discussions who have to get called in to work to help set up an announcement.

Miles had a plan for that scenario, too.

“On Saturday, we had to set up a stream for Monday’s announcement,” Miles said. “We came up with an internal cover story so if anybody saw what was going on, there was a cover story for what that was, and it wasn’t that announcement.

“The key thing was we kept it at only those that needed to know.”

It was a masterful move by both Penske and Miles.

Penske is already famous for keeping one of greatest secrets in racing history in 1993 and 1994. That is when his famed racing team along with Ilmor Engineering created “The Beast” – a 209 cubic-inch, pushrod engine that was designed, developed and tested in total secrecy. A small, select group of Team Penske mechanics were involved in the top-secret project and were told by Penske that if word of the engine leaked out, “it would be like cutting your paycheck.”

History repeated itself with the biggest racing story of the 21st Century, the sale of the world’s most famous race course that hosts the largest single-day sporting event in the world – the annual Indianapolis 500.

When INDYCAR held its “Victory Lap” award ceremony on Sept. 26 in Indianapolis, Miles told the crowd of an impending announcement that would be big news for the sport.

Was he coming close to giving away Monday’s announcement?

“No, that was about a sponsor announcement that will be coming along later,” Miles said on Thursday night.

Penske is one of America’s greatest and most successful business leaders. He is also the most successful team owner in auto racing history with 545 wins in all forms of racing including a record 18 Indianapolis 500 wins, a record 16 NTT IndyCar Series championships as well as two Daytona 500 wins and two NASCAR Monster Energy Cup championships just to name a few.

Penske was not the only bidder, but he was the one who made the most sense to the Hulman George Family, because it was important to find an owner who believed in “stewardship” of the greatest racing tradition on Earth more so than “ownership” of an auto racing facility and series.

“There were a number of parties that were engaged in thinking about this with us,” Miles revealed to NBC Sports.com. “There were a couple that got as far as what I call the ‘Red Zone.’

“Then, Tony George reached out to Roger Penske on Sept. 22.

“Price and value were always important, but the thing that nobody could match was the attributes that Roger could bring to the table, in terms of his history of the sport, his knowledge of the sport, combined with his business sense.

“He was viewed as the leader from a legacy or stewardship perspective, which was a very important factor.”