INDYCAR CEO Mark Miles offered some tremendous information on how he was able to help Hulman & Company, Chairman of the Board Tony George negotiate a deal with Roger Penske and what to expect next during an interview with NBC Sports.com.

Penske, Hulman & Company Chairman of the Board Tony George and Miles made Monday’s historic announcement that after 74 years of ownership of the Indianapolis 500 and the Indianapolis Motor Speedway, it has been sold to the Penske Corporation. Penske, Miles and key IMS and INDYCAR officials spent all day this past Tuesday surveying the property and its assets.

Miles is pictured above to the left, Penske in the center and George to the right.

Miles will remain with the new ownership group as CEO. The staff of both the Indianapolis Motor Speedway and INDYCAR will be retained. Penske will incorporate a few of his trusted officials into the group.

“Of course, we cared about our people and the staff, but it’s Roger’s call how he wants to organize,” Miles told NBC Sports.com. “It’s his view the approach he wants to take is get himself and the talent at Penske Corporation to understand what we are doing and for all of them to see how they can add value. It’s really his design that will take this approach with the people here and then add value to that.”

Because of Miles’ successful ability at turning INDYCAR and the Indy 500’s fortunes around since he took over in December 2012, Penske views him as a key member of the new group moving forward.

“For me, it’s really exciting,” Miles said. “I relish the opportunity to work for and with Roger Penske and his team and to see how much further we can grow the series and everything at IMS and IMS Productions under Roger’s ownership. I think it’s incredibly exciting. It’s a huge opportunity. I couldn’t be more delighted to have a chance to continue to be a part of it.

“I think I will learn a lot, and I hope I contribute a lot.

“That is my personal perspective. Roger told me he wants me to remain CEO, but we haven’t decided the name of the company. It will probably be Penske Entertainment.”

Prior to joining Hulman & Company as CEO, Miles had a 15-year tenure as head of the ATP tennis governing body and was the host committee chairman of Super Bowl XLVI at Lucas Oil Stadium in Indianapolis in February 2012.

During Miles, turn at the helm of INDYCAR, the series has enjoyed a bit of a renaissance that included a sellout for the 100th Indianapolis 500 in 2016 and most recently, a new series sponsor with NTT and a dynamic television contract with NBC and NBCSN that has all races on the same family of networks.

Penske has stated he would like to keep the schedule at 15 to 17 races annually but said he was open to adding one more race to the schedule. Penske believes the current race team budgets are able to compete at that number of races.

The sale will not close for the next 30 to 60 days. Once that becomes official, Miles explained what should be expected. 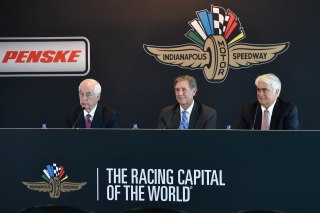 “I’m sure there will be some things apparent fairly quickly,” Miles said. “Generally, the M.O. is for Roger and his team to deeply insert themselves and learn everything they can about what we are doing. That includes the facilities at IMS, around IMS and how we do what we are doing now. What the priorities are, etc.

“As they go through that, my expectation at a high level is if they see something that shouldn’t be a priority we are working on, they will let us know that. Also, most of the focus will be on are there ways to operate more efficiently and what are the priorities for growth in all aspects of the business?

“My guess is Roger is not big on writing down plans but agreeing and getting things done. I think we will be pretty far along in the process of onboarding by the time we close at the end of the year and that will be an ongoing process.”

Now that Penske owns IMS and the Indy 500, and public reaction is extremely positive, could next year’s Indianapolis 500 be a sellout?

“We haven’t had that conversation,” Miles admitted. “We are still looking at everything and how it can be better for next May.

“You are ahead of me on that one.”

In addition to Penske’s acquisition of the Indianapolis Motor Speedway, the Indianapolis 500, INDYCAR and IMS Productions from Hulman & Company, there will be capital improvements made to the 110-year-old facility.

It is already considered a “Racing Shrine” but it’s about to get even better.

“We have thought for years and continue to think about areas that add more value for fans and the economics for the company all the way around the track and outside the track,” Miles said. “We have a list of six or 10 areas that could be invested in. And, the general condition and appearance of the place could be more ‘Penske like.’

“You know what I mean by that.

“But we never sat down and analyzed all of that to the point of knowing the investment, time and timeline of the construction, the cost and the ROI (return on investment). What we are doing already is, here are things to look at, let’s go over and look.

“Roger looks at things in great detail. He looks at paint and trim and graffiti and closets and then the bigger picture. What if we could add more high-quality seating and hospitality here? Just everything.

“It’s going to take a while to go through and get him immersed in everything and then sort out the priorities.”

The improvements will add to the fan experience, while the traditions of the famed event that is deeply rooted in history will remain the same.

“A hugely important asset and element of the Indianapolis 500 and the track are the traditions of so many individuals and families and we love that,” Miles said. “It means different things to different people. They all celebrate it and engage in different ways. The fact it means something, family traditions in different ways, it’s part of what the place is. Everybody respects that and we will start to help people have more opportunities to stay involved in that and connected.”

Miles guided professional tennis during the glory days of Jimmy Connors, John McEnroe, Andre Agassi and Pete Sampras. He brought the Western Hemisphere to Indianapolis for the Pan American Games in 1987 and was the guiding force in bringing the Super Bowl to Indianapolis in 2012.

Orchestrating the sale of the Indianapolis Motor Speedway after 74 years of ownership by the Hulman George Family to Penske is part of history, however.

“I don’t take time to think about it in the broader context like that,” Miles said. “I’ve never had a bad day, and I couldn’t be more excited with the opportunity to work with Roger Penske and his team to see how high is up? It’s not like there is a pinpoint.

“I understand this is really an important thing to the community.

“I love seeing the poll that ran on IndyStar.com that asked the readers on the day of the announcement if they were comfortable having Roger Penske as the owner of the Indianapolis Motor Speedway, and 92 percent said yes.

“I recognize the Speedway is really important to our community and our state and race fans everywhere. This is really an exciting development for everybody. I don’t care about other things I have done and been part of, but this is certainly very exciting to be part of this history.”

When the sale is completed, there are other companies that Hulman & Company will still own, such as real estate properties in the state and mineral rights and mining companies, just to remain a few. According to Miles, those companies will be spun off before the merger with Penske Corporation is completed.

The new corporation that controls those assets may retain the name of Hulman & Company, but that new family corporation will not include motorsports for the first time since Tony Hulman purchased the Indianapolis Motor Speedway from Eddie Rickenbacker on Nov. 14, 1945. 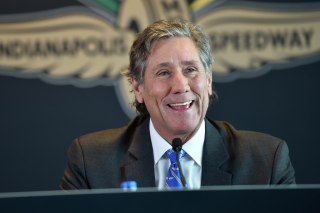 Miles is excited about the tremendous future that is ahead of the Speedway, the Indy 500 and INDYCAR. He also believes the Hulman George Family needs to be remembered for building the Indianapolis 500 into largest single-day sporting even on Earth.

“It was under the Hulman George ownership that the Indianapolis Motor Speedway became one of the supreme icons in sports on the planet,” Miles said. “It grew to mean so much to so many people, not just in Indianapolis, Indiana but race fans around the world and notable to people who didn’t care about racing as well. That is an incredible legacy.

“It’s part of the identity to the city and state because of their stewardship of it. It is a huge contributor to the economy of Central Indiana every year. It’s a source of pride.

“I think all of them can look back at their family’s contribution to the city and the state to know it is remarkable. It will never be forgotten.

“It should never be forgotten.”