There’s no question Steve Torrence is a proud Texan. When he’s not strapping on his racing helmet, the Kilgore, Texas resident proudly wears a black cowboy hat and shiny boots practically everywhere he goes.

It’s just part of who one of the Lone Star State’s favorite sons is.

Torrence also has a great deal to be proud of after winning his second consecutive Top Fuel championship in Sunday’s NHRA season-ending national event at Pomona, California.

Torrence followed up last season’s 11 wins – including being the first driver to win all six Countdown to the Championship playoff races – with nine wins in 2019, giving him 36 career wins and 55 final round appearances in his career.

But as he was interviewed shortly after he clinched the championship — even though he lost in the semifinal round of eliminations — instead of being effusive and ecstatic, Torrence was also uncharacteristically somewhat solemn and melancholy at the same time.

After publicly thanking his team – “the best in the business,” as Torrence frequently says – he also quickly paid tribute to a young man from Texas by the name of Brandon Seegers, who was tragically killed in an ATV accident last week (the young man in glasses is pictured in the tweet below).

Torrence wanted the world to know who Brandon was, calling him one of Torrence Racing’s biggest fans. It wasn’t lip service. Brandon – a 15-year-old freshman football player at Carthage (Texas) High School – truly was one of Torrence’s biggest supporters. He’ll be buried Tuesday.

Torrence also paid tribute to Brandon’s parents. The young man’s father has worked 30 years for Capco Contractors Inc., an oil and gas company owned by Torrence’s family. In a sense, because of their close relationship, Brandon and his parents are extended members of the Torrence family.

“This is for the Seegers family, who lost their little boy the Wednesday of last week,” Torrence said. “He was the biggest Capco fan there was. We’re taking the championship trophy home to him. We’re going to give it to all the Capco guys and his family.”

Admit it, when was the last time you heard someone in sports win a championship and then dedicate that effort to a young fan who was tragically killed just a few days earlier in an accident.

But that’s the kind of guy Torrence is, one of the classiest individuals in motorsports. And if you don’t really know who he is, you should, because you might understand why Torrence is who he is.

At the age of 36, Torrence is not just a survivor of the 1,000-foot dragstrips wars from New Hampshire to Seattle to Phoenix to Gainesville and everywhere in-between. 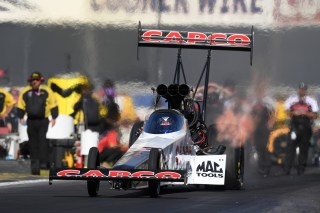 Torrence knows how fortunate he is to not only be a two-time champion, but more importantly, to be alive to earn and enjoy both of those titles. He came close, really close, to not being here anymore. That’s why Brandon’s death hit Torrence so hard.

He even tried to keep from choking up when he told the crowd about who his young friend Brandon was.

Torrence spent much of the weekend at Pomona thinking about his young fan. It definitely affected Torrence’s mindset and demeanor, especially on Sunday, with the pressure packed championship on the line.

To illustrate how different Torrence acted, he was involved in an incident after the first round that was completely out of character. While he may be one of the most competitive drivers on the NHRA circuit, he’s also normally a very level-headed, calm and cool persona.

Torrence uncharacteristically slapped opponent and part-time Top Fuel driver Cameron Ferre in the face at the end of the drag strip after they climbed from their race cars following their first round run and exchanged words.

Normally a fan favorite, Torrence was uncharacteristically criticized on social media and was met with a wave of fan boos after the race when he climbed on stage to accept his championship trophy and the big check that came with it. A contrite Torrence eventually issued a public apology to both Ferre and fans, admitting he was wrong. The NHRA is reviewing the incident and still could penalize Torrence.

“Tensions are high,” Torrence told NHRA.com. “There’s a lot of crap going on out there, but there’s still no excuse for me acting that way. I apologize to every fan, all my racing friends and racing rivals. It was a heat-of-the moment reaction on a day when emotions were high, especially in the Capco camp. I talked to Cameron and we’ll just put it behind us and move on.”

Given the championship pressure and what he was enduring emotionally, Sunday may not have been Torrence’s finest moment or best day professionally or personally. But at the same time, he further cemented why he’s on his way to becoming one of the best drivers in Top Fuel history, that he makes mistakes and was man enough to admit when he made one.

He also cares for others and what they go through perhaps more than most because he himself came so close to not being around to enjoy the success he has enjoyed to date – and all the additional success that he’s likely to continue to enjoy for many more years to come.

My heart goes out to the Seegers’ family as they lost son Brandon, (TR Hat) yesterday in a tragic accident. Brandon was a HUGE Torrence Racing fan and loved to come out to the Dallas race. His father has worked with CAPCO for 30 years. Please pray for the family at this time. pic.twitter.com/WvsLkYPldP