Having just completed a promising first year in NHRA Top Fuel competition, Austin Prock is on the road to even greater drag racing success in his career.

That’s why it’s not surprising that Prock was named the winner of the 2019 Auto Club Road to the Future Award during Monday night’s annual NHRA Awards dinner at the Ray Dolby Theater in Hollywood, California.

The Road to the Future Award is NHRA’s version of Rookie of the Year, and Prock was among the brightest young stars on the circuit this past season, including winning his first national event at the Northwest Nationals at Pacific Raceways in suburban Seattle, the 16th race on the 24-race schedule. 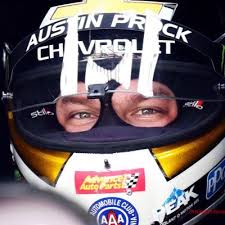 What made that first win all the more sweeter is it came at the same event that his boss, legendary 16-time Funny Car champion John Force, captured his milestone 150th career win.

One month ago, Prock set a personal best run of 3.688 seconds at 334.40 mph over veteran driver Doug Kalitta in the first round of eliminations at the AAA Texas NHRA FallNationals three weeks ago in Ennis, Texas (suburban Dallas).

“I am proud of the season this Montana Brand / Rocky Mountain Twist team put together,” Prock said in a media release. “My guys worked their asses off all season long to give me the opportunity to win the Auto Club Road the Future Award. I couldn’t have done it without them.

“I would have never been here without John Force and Robert Hight (president of John Force Racing). They gave me the opportunity to fulfill my dream and I owe the world to them. I hope I made them proud.”

Prock became only the 10th rookie in the history of the NHRA pro ranks to both win a race in their first season and also go on to win the Road to the Future award. He also was the 13th rookie in the sport’s history to qualify for the Countdown to the Championship, NHRA’s six race playoffs.

Austin Prock is the son of veteran crew chief Jimmy Prock, who tuned Hight to his third career NHRA Funny Car championship this past Sunday.