Josef Newgarden figured the offseason following his second NTT IndyCar Series championship would go much like the weeks that followed his first title in 2017. He would make some media appearances, attend some awards banquets, meet with the sponsors and then ease into another IndyCar offseason.

What has happened this year, however, has been stunning to say the least.

First came the news on October 30 that popular driver and IndyCar Series race winner James Hinchcliffe would not be a driver for Arrow McLaren Racing SP, although he has one year left on his contract.

Then came what can be called the biggest news in racing in the last 50 years on November 4. That is when Newgarden’s team owner and famed business and industry leader Roger Penske had purchased the Indianapolis Motor Speedway, the Indianapolis 500, INDYCAR and IMS Productions from Hulman & Company. That will end 74 years of ownership by the Hulman George Family when the sale is completed in January.

On November 22 came the announcement that four-time Champ Car Series champion and 37-time race winner Sebastien Bourdais would not be part of Dale Coyne Racing with Vasser and Sullivan in the No. 18 entry next season. A major part of Coyne’s funding for 2020 had fallen through and the team has yet to sign a contract to return to Honda or join Chevrolet in 2020.

Newgarden admits he doesn’t know what to expect next.

“It’s been a crazy offseason,” Newgarden told NBC Sports.com in an exclusive interview. “It’s been one thing after the other. It seems like every week there is some seriously impactful news that has been hitting the table. It’s been a whirlwind.

“It makes me think about my position in the sport and how fortunate I have been to not only have an opportunity, but a continued opportunity in IndyCar. You can’t take it for granted. It’s like in any other sport, you don’t know how long your runway is going to be in the sport itself or with the team in that sport. It’s a changing landscape and sometimes you forget that.

“I’m excited to go racing again but this offseason has not been short of shocking news. I don’t know what else is going to happen before the end of the year, but it is setting up for quite the anticipation before St. Pete.” 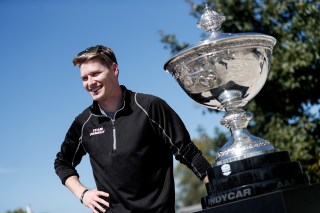 Of all the news that has happened during the IndyCar offseason, the most impactful is Penske’s purchase of IMS, the Indy 500 and INDYCAR. The 82-year-old shows no signs of slowing down and with his deep respect for the Indy 500 and IMS, the future is in great hands under his leadership.

But how will Penske’s new responsibilities impact Team Penske, which features Will Power, Simon Pagenaud and Newgarden?

“With Roger’s announcement, it’s a very welcome change for everyone involved,” Newgarden said. “We are excited what the future is going to bring.

“Roger has always done a great job of delegating. On the racing side, we spend the majority of our time with Tim Cindric overlooking the racing operation. I think Roger’s time will shift in the future and we will see him less on the racing side and more on the ownership side.

“I think that’s a good thing. The health and the vitality of the series is just as important as the racing team health. It stands to be a benefit for all of us. I’m excited about it.

“If there was one person in the universe that you could pick to take over the reins of IMS and the IndyCar Series, there is no better person that Roger Penske.”

Newgarden believes Penske is a great listener and puts a team in place to get things accomplished with sincere thought. He is also very focused on fans and customer relations not only for both the short term and long term.

Newgarden clinched the championship in the season-finale on September 22 in the Firestone Grand Prix of Monterey. Now that it’s December, Newgarden is ready to get back to work.

“Very much so,” Newgarden admitted. “That’s always the case with IndyCar. When you end the season, it’s nice to get a break. But as soon as you get two months in, you are ready to go racing again. I’ve already started to put a plan in place for how next year should look, what we can do better, areas that are strong and areas that need work.

“It’s a never-ending battle. When you get to the top of the group, it’s very difficult to stay there. Things are always changing in motorsports. Trying to retain your crown is getting more and more difficult every time.

“The work has already begun.”