INDYCAR CEO Mark Miles told NBC Sports.com that INDYCAR’s season-ending race at WeatherTech Raceway in Monterey, California is not in any type of jeopardy after Monterey County officials sought a new management company for the Laguna Seca facility.

After 62 years of continuous management of the Laguna Seca Raceway, the Sports Car Racing Association of the Monterey Peninsula (SCRAMP) was advised via email by County of Monterey Assistant County Administrative Officer (ACAO) Dewayne Woods last month. The email said, “…the County is now in negotiations with another proposer for management services at Laguna Seca Recreational Area.”

The NTT IndyCar Series returned to Laguna Seca in September for the season-ending Firestone Grand Prix of Monterey. It was the first time IndyCar had competed at Laguna Seca since September 12, 2004 after it had been a regular on the CART schedule from 1983 to 2004.

NBC Sports.com asked Miles if the new management group would impact the multi-year contract at the picturesque road course near Monterey, California.

“I’m happy to answer that,” Miles told NBC Sports.com. “We have following the situation closely for several months. At this point, we don’t have any concerns. Our sanctioning agreement is with the county and not was not with SCRAMP. The county is excited about the event and looking forward to the next edition in 2020.

“The county has appointed a new management team for the operation of the facility. There is plenty of work to do on their part and on our part to make sure they understand the requirements for the event and to make sure they execute well.

“The event is certainly going on. The financial underpinnings and the contractual obligations are between us and the county. They think they have selected the best possible management team and we look forward to working with them.” 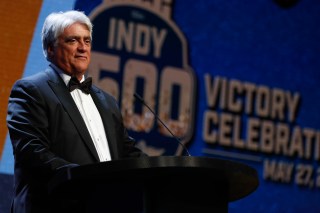 “The agreement is between us and the county and the county is absolutely comitted and excited about the future, they have appointed a new management team at Laguna Seca, and we look forward to working with them,” Miles said.

INDYCAR officials believe the series return to Laguna Seca was very successful in terms of promotion and spectator turnout.

“We were really pleased,” Miles said. “I think we under-estimated how outstanding it is both for the race and for the venue and the region. I thought it was better than we expected but it bodes well for the future.

“We’re going to be looking at how to take better advantage of it in the promotion of the series.

“There is plenty of room for growth and they will find ways to manage that from a traffic perspective,” Miles said. “We thought it was a great success. We think it can be even bigger. We have the commitment of the county and look forward to working with the new management team.”

Miles and INDYCAR are optimistic of continued success at WeatherTech Raceway with new management. However, the decision to end a 62-year relationship with SCRAMP was a surprise.

“This news comes as a surprise to the SCRAMP organization,” said Tim McGrane, CEO of WeatherTech Raceway Laguna Seca and SCRAMP, who took over the position in June 2018. “We were starting to make real progress on getting the facility and the raceway operations turned around and poised for the future, but it appears at this time we may not have the opportunity to see these plans through.”

SCRAMP believed the Monterey County Board of Supervisors denied the chance for it to continue with its plan.

“As the existing facility operator, we were stunned by the fact that we were not provided the opportunity to discuss our proposal with the ACAO,” McGrane said. “The entire process has been unconventional, ranging from the bypassing of the County’s usual Request For Proposal (RFP) process, the announcement in mid-October requesting proposals from any interested parties with only two weeks’ notice, and complaints that SCRAMP had not met deadlines to submit a proposal when in fact a submission date had been agreed upon in May, and subsequently met, has been challenging.

“We have been in this position before with the County administration, but we, our fans, racing series and teams, do have to look at the possibility of the era of SCRAMP operating Laguna Seca Raceway coming to an end.”

In 2015, Monterey County began private talks with International Speedway Corporation (ISC) who, after a careful review of the operational parameters of the facility, determined not to submit a formal proposal for management of the track. In 2016, the Monterey County Administrators Office entered into negotiations with another group to replace SCRAMP for 2017 but were unable to agree to terms that were mutually acceptable. The County then reverted back to a three-year agreement with SCRAMP to continue running Laguna Seca.

According to a statement from SCRAMP, in 2018, the SCRAMP-run Laguna Seca Raceway attracted 263,888 attendees and generated $84.4 million in direct spending generated by event attendees over 26 days of the seven major events. 2019 saw SCRAMP orchestrate the long-awaited and highly successful return of IndyCars to Laguna Seca, with a larger than anticipated spectator count for the weekend.

“We’ve delivered an extensive, forward-looking proposal to the County for a new, long-term 20-year management and operating agreement that incorporates solid plans for revenue generation and expense reduction, expansion of the use of existing facilities, and development of Laguna Seca into a world-class destination,” said CEO McGrane. “We are building the right team, both paid staff and volunteers, with extensive motorsports experience, institutional knowledge, and the dedication to lead this important Monterey County asset into a successful future. We hope we still have the opportunity to present our plans directly to the County Board of Supervisors and we would be proud to continue SCRAMP’s 62-year stewardship of Laguna Seca on behalf of Monterey County.”

The Sports Car Racing Association of the Monterey Peninsula, a 501(c)4 not-for-profit, was formed in 1957 by local business owners and civic leaders. SCRAMP’s goal was to raise the funds needed to construct a permanent motor racing circuit to maintain the tradition of sports car racing on the Monterey Peninsula which had begun in 1950 in the Del Monte Forest at Pebble Beach. SCRAMP is comprised of a Board of Governors, Race and Events Committees, and hundreds of loyal volunteers who donate thousands of hours each year to ensure the successful operation of events here.

The SCRAMP organization acquired leased land from the US Army at Fort Ord on August 7, 1957, and the now-legendary track, built with funds raised by SCRAMP, held its first race, the 8th Annual Pebble Beach at Laguna Seca SCCA National Championship Sports Car Road Races, on November 9 & 10, 1957. In 1974 the site was transferred from the Army to Monterey County, who together with SCRAMP, have managed the facility through this year.

Miles will become CEO of Penske Entertainment and will continue his duties that he currently has. Since the sale was announced on November 4, Miles and key officials have met with Penske and his top officials on a weekly basis.

“It’s been great,” Miles said. “We are covering tons of ground. Roger and his team are all about adding value.

“It’s a very focused effort that is making great progress.”