The 2019 NHRA season wound up being one where there was almost as much news and highlights made off the drag strip as on it.

That was the case in two of the top four storylines for the recently completed season, with the top story occurring even before the first pass down a drag strip in competition took place.

We’ve also included a poll for you to vote and see if you agree with our picks or not.

1. A Force-ful departure: Just two weeks before the 2019 season was due to open, Funny Car driver Courtney Force, daughter of 16-time champion John Force, stunned the drag racing world by announcing she was taking a hiatus from the sport – although she insisted she was not retiring. The wife of IndyCar driver Graham Rahal, Force turned over her high dollar Advance Auto Parts sponsorship to sister and Top Fuel driver Brittany Force, who had previously been sponsored by Monster Energy. Courtney Force became the second high-profile female drag racer to step away from the sport in just over a year, joining fellow Funny Car driver Alexis DeJoria, who went on hiatus after the 2017 season. This past October, DeJoria announced she would return to full-time NHRA competition in 2020. But as for Courtney, she remains on hiatus for at least the time being. 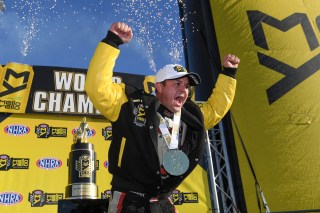 2. Torrence’s Texas two-step: Proud Texas native Steve Torrence won his second consecutive Top Fuel championship in 2019, winning nine races (including eight in a nine-race stretch). While Torrence enjoyed an outstanding season in 2018, winning 11 races and becoming the first driver in NHRA history to win all six races in the Countdown to the Championship playoffs, he won just one playoff race in 2019. But he still managed to earn just enough points to hold off his closest rival, Doug Kalitta, by a mere three points for the second championship. Also of note: Steve’s father Billy finished a career-best fifth in the final standings, even though he competed in just 16 of the season’s 24 national events. 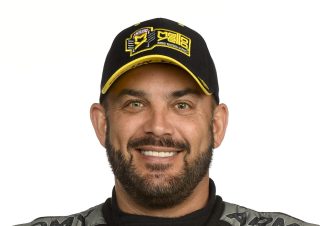 3. What happened to ‘The Sarge’? Tony Schumacher is the winningest Top Fuel driver in NHRA history, with eight championships and 84 national event wins. But he was essentially AWOL in 2019, failing to compete in even one race. The reason: sponsorship. Or more precisely, lack thereof. The U.S. Army, which had sponsored Schumacher for nearly 20 years – which prompted him to adopt the colorful nickname of “The Sarge” — pulled its funding after the 2018 season, leaving Schumacher without a fully-funded ride for 2019. Rather than try to race piecemeal from race to race with limited sponsorship, the son of team owner Don Schumacher decided to watch the season from the sidelines. How Schumacher could not attract a new big dollar sponsor, given his domination and success in the Top Fuel class, is almost unfathomable. Unfortunately, it’s looking like Schumacher – who turns 50 on Christmas Day – may remain sidelined in 2020.

4. A Force to be reckoned with once again: Even though he fell short of adding to his record 16 NHRA Funny Car championships, the 2019 season was definitely one of resurgence for John Force, the sport’s winningest and most popular driver ever. Force, who turned 70 years old in May, isn’t letting age slow him down, earning two wins during the season – including a milestone 150th Funny Car victory of his career – and finished fourth in the standings (up from ninth in 2018, seventh in 2017, and his best finish since he ended up fourth in 2016).

5. At the Hight of his success: Robert Hight isn’t flashy or verbose as his boss, John Force. But when he’s not working as president of John Force Racing, the soft-spoken Hight has become one of the premier drivers in Funny Car history. In 2019, he earned his third Funny Car championship – his second in the last three seasons and third since 2009. Along the way, he captured six wins (including a milestone 50th win), was runner-up three other times, reached the semifinals five times and led all drivers as the No. 1 qualifier for eight races (a full one-third of the season). This was perhaps the most dominant championship of all for Hight, including leading the Funny Car standings for 23 of the 24-race season.

6. Erica’s baaaaccckkkk: Erica Enders is back on top of her game, and on top of the Pro Stock category, earning her third championship in the last six seasons (and first since 2015). Admittedly, her championship came in the first year of a shortened Pro Stock schedule, having been cut from a full 24 races to just 18. Still, the Texas native won two races, finished runner-up three other times and reached the semifinals four other times. Also of note, Enders’ Elite Motorsports teammate, five-time Pro Stoc champ Jeg Coughlin Jr., came oh, so close to winning his sixth title, finishing just 21 points behind Enders in the final standings.

7. What does he have to do to win first championship? Doug Kalitta came the closest he ever has to earning the first Top Fuel championship of his 20-year drag racing career, finishing just three points behind Steve Torrence in the Top Fuel rankings. It was almost heartbreaking as Kalitta seemingly did everything he needed to do to win the championship, including winning the season-ending race in Pomona, California, one of three wins he earned (as well as two runner-up finishes and six semifinal showings). Kalitta began the season with a win at Pomona, as well. But Torrence came into the season-ending event at Pomona with just enough of a lead (and reached the semifinals) to hold off Kalitta’s challenge. How close was Kalitta from winning the championship? If he had advanced one more round in any of the six playoff races, he would have bested Torrence. Unfortunately, in a sense, Kalitta – nephew of legendary NHRA team owner and racer Connie Kalitta – has become the Mark Martin of NHRA Top Fuel: always a bridesmaid but never a bride when it comes to winning a championship. But there’s still hope, Kalitta fans: he’s going to give it another try in 2020. Maybe that will be his year – finally.

8. He’s one heck of an easy rider: Andrew Hines made it look easy in 2019 – although it was far from it – when he earned his sixth career NHRA Pro Stock Motorcycle championship (and first since 2015). Son of past PSM champion Byron Hines, Andrew Hines enjoyed one of the most dominating seasons ever of his career — not to mention one of the most dominating seasons in the Pro Stock Motorcycle category — winning eight of the 16 PSM events contested, along with earning two runner-up and three semifinal finishes. Hines held off 2016 PSM champ Jerry Savoie by 26 points and 2018 champ Matt Smith by 46 points.

9. What a difference a year makes: JR Todd had an exceptional season in 2018, with six wins, two runner-up finishes and six semifinal showings. Not surprisingly, the Indiana native went on to win the Funny Car championship that season for Kalitta Motorsports. But one year later, Todd was seemingly an afterthought when it came to challenging for the Funny Car crown once again. For as good as he was in 2018, Todd struggled through much of the 2019 season with just one win, three runner-up and two other semifinal finishes, ultimately finishing seventh in the standings, a distant 246 points behind series champ Robert Hight, who was second to Todd in 2018.

10. Strong start for sport’s top rookie: When your father is renowned crew chief Jimmy Prock, it’s clear that the apple hasn’t fallen too far from the tree. Such is the case of Austin Prock, who finished his first season in Top Fuel by earning NHRA’s rookie of the year honors. The younger Prock finished eighth in the Top Fuel season standings, including one win and five semifinal finishes driving for John Force Racing. Ironically, he finished one spot higher than three-time Top Fuel champ Antron Brown, who had a rough season, finishing ninth in the standings, with no wins, two runner-up showings and reached the semifinals just five times.